The grid was all abuzz with talk of the soon-to-be-introduced criminal performance art. Hamlet Au was neglecting his new duties as a flack for Blue Mars and Little Lost Linden proclaimed him insane-- again-- in the Bot Zone blog. Word was Bettina Tizzy was thinking about re-launching NPIRL with the new name of Not Stealable in Real Life. The SL Marketplace (XStreet) was glutted with "found" (i.e. stolen) objects, and several Thieves Guilds had moved lock, stock, and barrel from World of Warcraft to Second Life. Even Philip Linden was trying to get in the act, asking to be Linden Lab's interim CFO (Chief of Found Objects). Rezzed TV had renamed itself the Criminal Performance Art Network, with 24/7 coverage, and the defunct Metaverse Messenger was promising to re-launch  and put out an if-it's-not-stolen-it's-not-art issue. The bloggers were driving their readers insane with speculations about ImSoNotADiva Bartlett's new art form.

Sweetie was secluded in her Fortress of Solitude, experimenting with theatrical lighting effects (so she would look her best when bringing Diva down) and working up psychological profiles on the Bobnappers.

"Profiling Diva was easy," she said, on one of her rare departures from her cave. "It's her sidekick who's throwing me. I can't quite figure it out."

"Say, I said, "you know how on programs like Cold Case Files and CSI: New York the killer always turns out to have at some time applied for a job as a cop?"

Sweetie smiled brightly. "The application files from the police station!"

Once upon a time, in our wilder days, Sweetie and I broke into the empty Bay City Police Station. We stole their donuts, equipped ourselves with uniforms and riot gear from their free vendors, and pored through the job applications in their file cabinet. Amazingly, two burgl-- curious explorers-- were able to access the personnel files. As soon as I realized I was reading actual applications I deleted them, but since I had been careful not to empty my trash, I was able to retrieve them now.

"Hmmm," Sweetie read. "Philip Linden's application is in here. Is there a job he hasn't applied for? He wanted to be interim Chief of Police."

"Here's an form from Crap Mariner. Crap wanted to be a Robocop. Or, failing that, a bomb-disarming robot."

"This is an interesting one," Sweetie said, "from not one applicant, but two."

I read over her shoulder. "Looks like they failed the psych exam."

"Yes," she said. "They had no brains. They appealed. This is from their brief:


Litigants Golemdum and Golemdee are sincere in their desire to join the law enforcement community and believe their rejection by the Bay City Police Department is based on their ethnic status as Golem-Americans. It should be noted that both Dum and Dee are legal emigrants and in their 600 years of existence have no criminal history. They have extensive experience as security consultants, for instance in 16th-century Prague, and are now employed in Iraq by Xe Services-- that's the new name for the disgraced Blackwater Corporation. They're renowned for throwing themselves mindlessly and tirelessly into any task assigned to them. They were consultants for any number of golem-related silent films, and many believe they served as an inspiration for Czech writer Karel Čapek's 1921 play Rossum's Universal Robots. They're the very prototype for mechanical creatures, and it's manifestly unfair that their applications were turned down by the Bay City Police Department. They demand their rights to club and arrest lawbreakers, wear cool uniforms, and eat clay donuts." 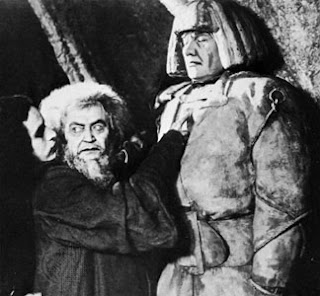 "The perfect lackeys!" I said.

"The fact they're made of clay could explain the lack of henchman fingerprints and DNA on the evidence," she said.

"Now we know what we're looking for," Sweetie said.

"Yes," I said. "A disembodied head with no small resemblance to Leona Helmsley and two clay giants."

"It dragged out in the virtual courts for years," she said, "since neither party could afford Judge Camper's demands for a decision in their favor. And listen to this-- they dropped their appeal just two days before the Bobnapping."

Posted by Cheyenne Palisades at 9:10 AM