I hold breedables in absolute contempt, but I have to say Dwarfins are oh, so cleverly and skillfully made!

Sweetie and I noticed them on display at one fair or another at Christmastime. I was impressed. She wasn't, but only because her ancient Macbook wouldn't rez them (she refuses to give it up because Agent 99 once owned it and scratcher her initials into the back. When I suggested that perhaps she was reading it upside down and it had actually belonged to Agent 66-- well, you wouldn't believe the look she gave me.

So anyway, we ran across them again at the Fantasy Fair and joined the group to get a free Dwarfin. We both drew females, so Sweetie bought a female and a rock for the dwarfins to worship. I bought food for them to eat-- for, you see, you're in perpetual hock to the creator for grub; the dwarfins turn into stone if not fed. The food lasts for a day or more, depending on how much you spend. Food is a ham, which dwindles away as it is consumed.

So yeah, it's a racket, but it's a nicely-crafted racket, and we've had fun playing with our dwarfins this week. Our little dwarven dwarfin family of three has now grown to four-- there's a newly-created rock on the sea decks on Whimsy Kaboom with a newly-minted dwarfin ready to be chiseled out so she (it's a girl!) can begin life. That'll (hopefully) give my male a mate. 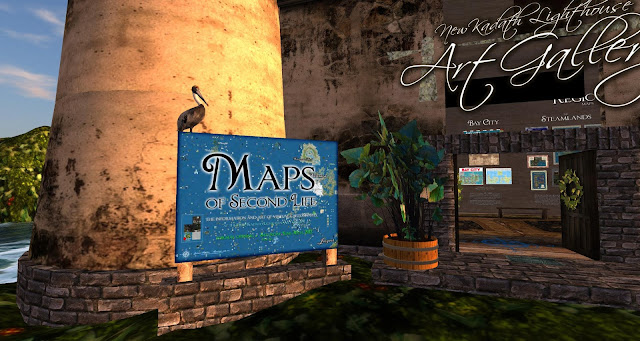 I love maps of Second Life-- maps of the first sims, maps of Linden Roads and train routes, maps!

Sweetie and I recently visited the New Kadath Lighthouse. It's an art gallery, and currently on display is the best collection of Second Life maps I've ever seen.

It's a wonderful exhibit. You should visit.

Examples are below the fold.


A month or so ago Sweetie and I visited one of our favorite places (JD Mechanical Toy Factory) to see what was new. We found the place turned upside-down. A lot of the goods for sale looked like the work of  the toy factory's Jeanne Dibou, but were unfamiliar. We were perplexed. Only now, as I write this, when I teleported to the toy factory to get its coordinates for the SLURL in the link above, did I realize we went someplace else entirely and not to the toy factory at all. The toy factory is still there, and now the entire sim has been developed. I can't wait to explore this weekend! 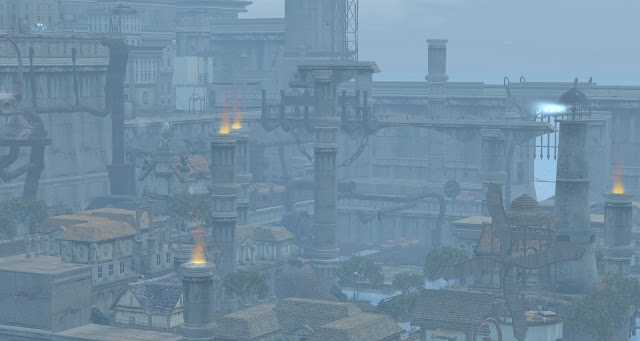 So anyway, do NOT miss the toy factory, but that's not what I wanted to write about. Last week Sweetie and I visited Annon, one of the Fallen Gods sims. We found a lot to like there; in fact, in many ways it reminded us of our sim Whimsy Kaboom. 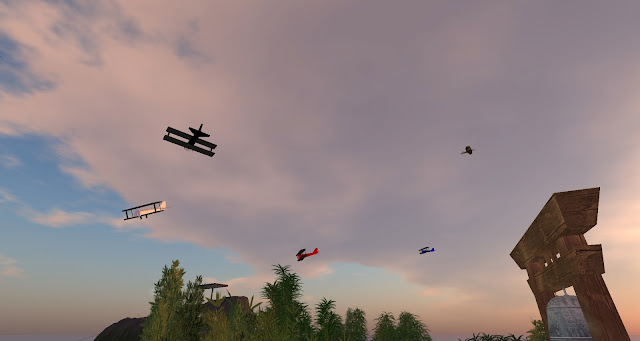 Sweetie had been conspicuously absent all afternoon, so I went on a search for her. I found her in the upper gardens rezzing and crashing biplanes created by Twisted Laws' full-perm runway plane generator I had given her. She was training for her new job as an air traffic controller.

"Don't interrupt me!" she said. "I have forty-two Stearmans in the air!"

"And a dozen or so in flames on the ground," I commented. "And that one about to hit the torii. 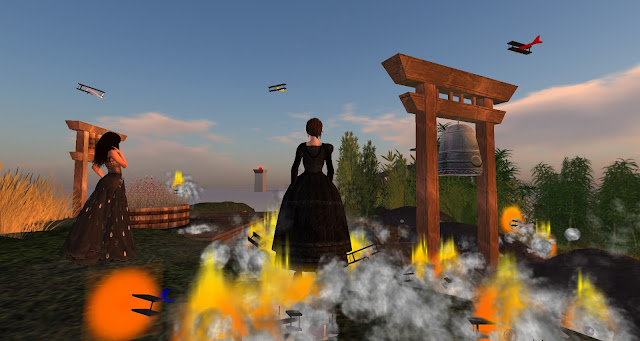 If you keep up with news in the real world you probably know commercial flights have been stacked up for the past few days due to a shortage of air traffic controllers. And why is there a shortage? Because the controllers are being required to take mandatory no-pay furlough days because of the sequester-- you know, the delayed government cutbacks forced on Obama by the Republicans during his first term. We are now post delay and all sorts of government services are being scaled back. Don't even think about who's not inspecting your drinking water or the beef you had for dinner last night. Just be happy Sweetie will soon be on the job with the FAA.

"You didn't really get a job as an air traffic controller, did you?" I asked.

"Of course not," Sweetie said. "They would have red-flagged me for any number of reasons."

"Or wearing my katana during the job interview," she said.

"Or all those wanted posters," I said.

"I'm just going to show up in uniform and lockpick my way into the control tower," she said." "But I'll need to know what I'm doing, so I'm practicing."

"That runway is a bit crowded," I said. 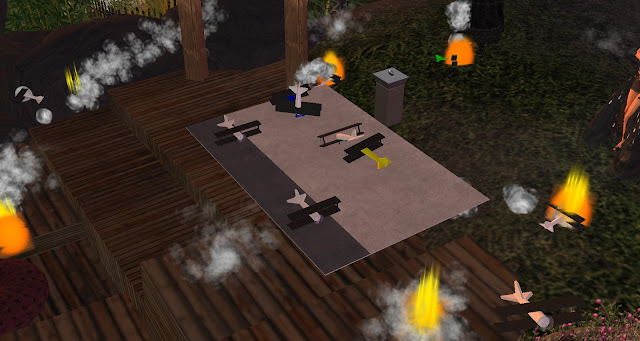 "You should have seen it before I lost those twenty-four planes," she said. "And look straight down! The airplanes make a perfect image of John Lennon."

"Exactly," she said. "Straight lines are so boring."

"Sweetie," I said, "you can't lose any planes to art in real life."

She gave me a pitying look. "That's why I'm practicing."