On 24 February Linden Lab announced a new policy for third party viewers. These sections are new:


The first section means viewers will no longer be able to show online status of avatars who have elected not to have their status known. This week the Lindens will break the llRequestAgentData scripting command that gets such status, breaking many scripted items. (the command will report only the status of the script creator and current owner).

The second section will break the ability of viewers like Phoenix to indicate the viewers used by other avatars.

The fourth section is the most problematic. Why? Because it changes a policy in operation since 2007 and because the Lindens are being cagey about just what does and doesn't break the new policy.

For sure it will break things like the secondary attachment points of some viewers, which allow avatars to wear two or more objects at the same position. Linden viewers don't do this and show secondary attachments hanging randomly in space near the avatar.

Essentially the last section cripples third party viewers, limiting them to the state of the art of Linden Lab's viewers-- and we all know how super cool the Linden viewers are!

I have to wonder-- back in the days when the Linden viewers 1.x were showing my hair and shoes stuck up my butt after teleport, would they have jacked Nicholaz Beresford, who fixed the problem in his viewer?

Also consider-- Nicholaz gave his fix to the Lindens, and it still took them the better part of a year before they fixed the bug in their viewer.

Back in 2007 the Lab, at CEO Philip Rosedale's urging, made the viewer code freely available for use. Here's the first paragraph of the press release:

San Francisco, CA — January 8, 2007 — Linden Lab®, creator of 3D virtual world Second Life® (www.secondlife.com), is releasing the code of its Viewer application to the open source software development community. Developers can now access the source code to the Second Life end-user software in order to make modifications, enhancements and to add new features. The move marks Linden Lab's continued commitment to building the Second Life Grid as an open, extensible platform for development, rather than a closed proprietary system.

Hmm. Did you get that second sentence? Developers can make enhancements and add new features?

Clearly the lab is backtracking on Philip's vision.

"Open sourcing is the most important decision we've made in seven years of Second Life development. While it is clearly a bold step for us to proactively decide to open source our code, it is entirely in keeping with the community-creation approach of Second Life," said Cory Ondrejka, CTO of Linden Lab. "Second Life has the most creative and talented group of users ever assembled and it is time to allow them to contribute to the Viewer's development. We will still continue Viewer development ourselves, but now the community can add its contributions, insights, and experiences as well. We don't know exactly which projects will emerge - but this is part of the vibrancy that makes Second Life so compelling."


Now is the time the Lab was supposed to opensource the server software-- not backtrack on a bold and smart decision it made five years ago!

Linden Lab has shown itself perpetually incapable of incorporating third-party enhancements into its viewer. Are we to suppose this will change? I hardly think so.

I've been using third-party viewers since they first became available-- first Nicholaz', then Emerald, now Phoenix, and I have Firestorm in the wings, awaiting the day when I'll have no choice but to migrate. My experiences in the world have been wonderfully enhanced, from the days when my hair and shoes stayed in place after teleports to Phoenix' built in radar and AO and flexible preferences. I cannot IMAGINE going back to a Linden viewer.

Which leads me to wonder-- since Phoenix changes my viewer experience by getting rid of that horrible fricking bar on the right side of my screen, is it in violation of the new policies?

Linden Lab, you are once again, as usual and as always, showing contempt for the innovation and hard work of the the community, throwing away thousands and thousands of hours of labor done to make Second Life better.

That said, the least you can do is to clearly spell out what does and does not violate the new policies.

Sometimes I Forget Just How Ugly Second Life Can Be 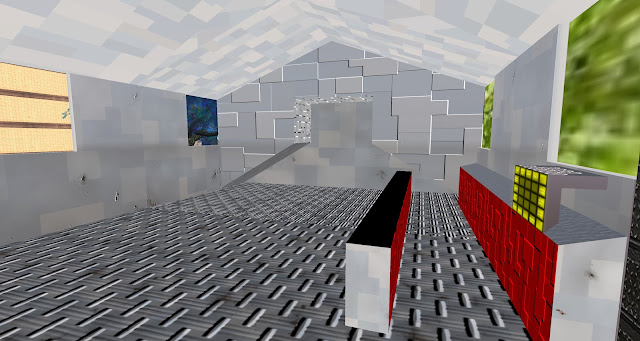 For a long time now I've not heard sounds made by objects in Second Life.

I've not been in world much because I'm catching up with five-and-a-half years of neglect to my property. I've spent the past weeks raking leaves, pulling ivy, removing crud from my decks, and washing the house. I've been doing little projects on my Miata, too.

So mostly I've been logging into SL to check prims on my sims.

The problem, by the way, was specific to Phoenix. I was able to hear sounds in Firefox and in V. 1.23.

After checking my audio settings, I thought the problem was most likely a corrupted file, so I uninstalled and reinstalled Phoenix.

I sent a message to the Phoenix Viewer people, and got a reply telling me I should zap the hidden files on my hard drive. I turned on the ability to see the hidden folders that contained those files and deleted them (after uninstalling Phoenix). When I reinstalled the viewer, I was still deaf.

I was getting frustrated-- especially since I had managed to delete five years of chat logs (fortunately I have them recently backed up on an external drive).

I took a last look at preferences and noticed Phoenix allowed me to set the location for sound files.

I vaguely remembered setting that, thinking object sounds might play faster if cached.

Nothing happened, but when I relogged, I was no longer deaf.

It's so nice to be able to hear again!

Posted by Cheyenne Palisades at 2:45 AM 0 comments 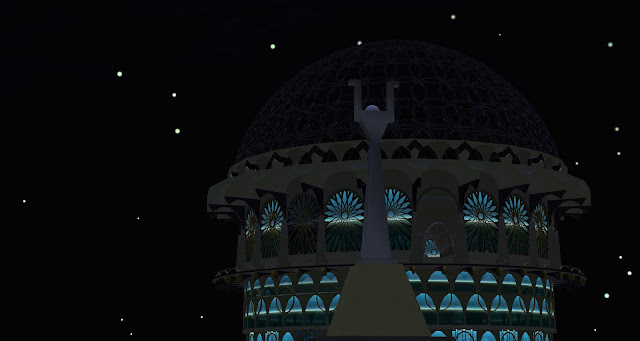 A couple of weeks ago a link on New World Notes let me to this post on Serendipity Haven's blog.

Serendipity has been researching the ancient artifacts of Second Life and went on a quest to view the Man statue, which stands here on the Natoma sim, not far from the Ivory Tower of Prim (That's the Tower in the background, above).

The Man is one of the oldest objects and perhaps even the oldest in Second Life. With a creation date of 19 July, 2002, it predates Second Life itself. 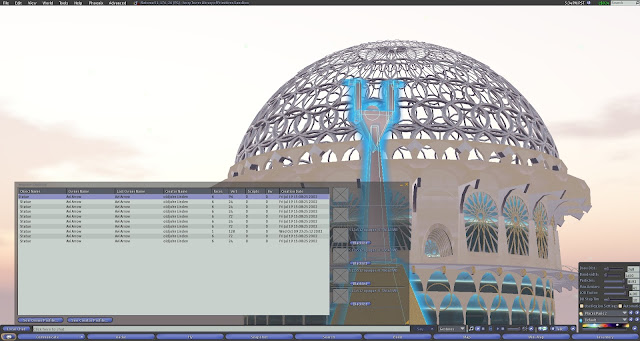 Please read Serendipity's post for a properly reverential discussion of the statue. 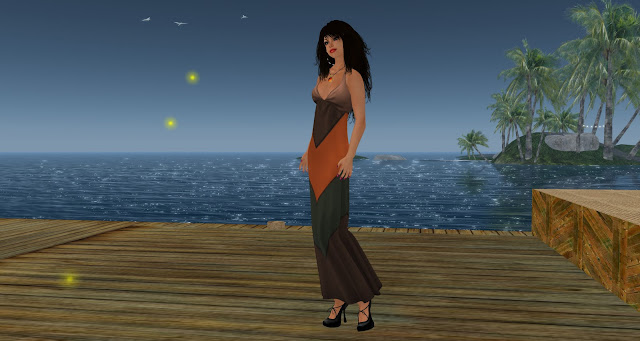 Where was I before I got distracted by all those avatars at coldLogic?

So... I bought three outfits.

The first was the dress at top. It's called Chase, in autumn.

Notice how the dress conforms to my stance: 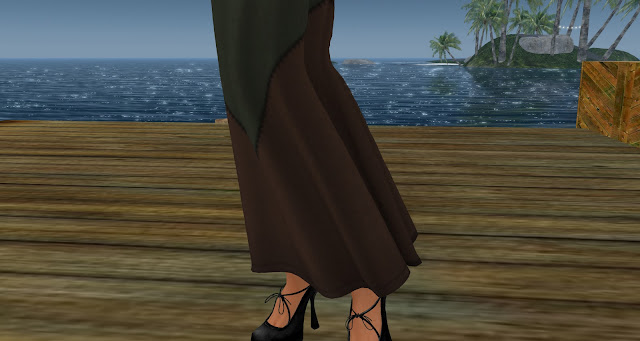 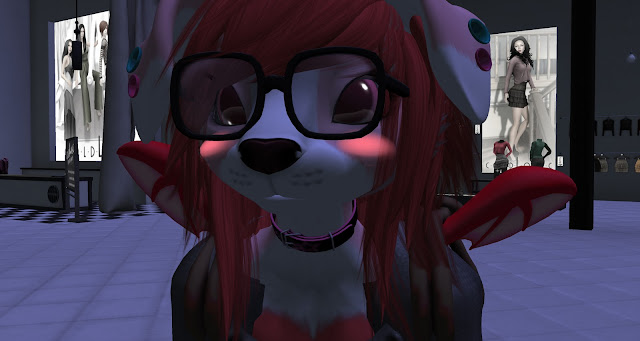 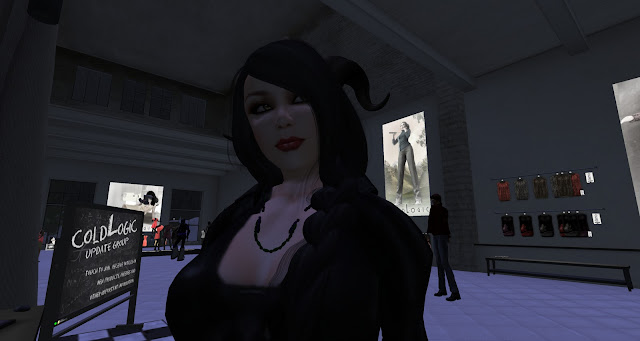 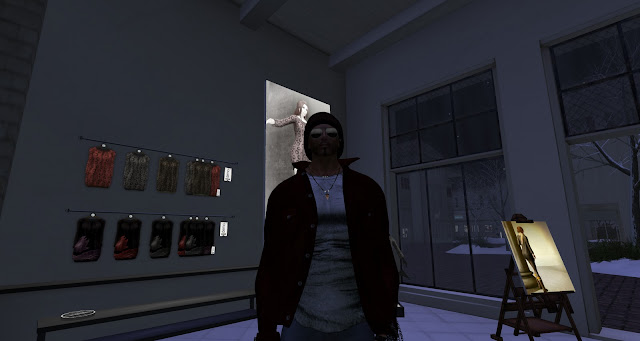 And thank you, all your groundhog avatars, for making winter six weeks shorter!

You DID make winter shorter, didn't you?

Cause if you didn't I'm gonna go all Punxutawney Phil on you!

So, since virtually everyone on the grid can now see mesh, and since designers have had a few months to learn what they're doing, and since this is a non-fashion blog, I decided last night I needed to have a couple of mesh outfits.

I admit I was unduly influenced by this post by Iris Ophelia.

So last night I took myself and my 1400 Lindens to coldLogic to shop.

I had in mind this Kelley coat, which Iris had talked up: 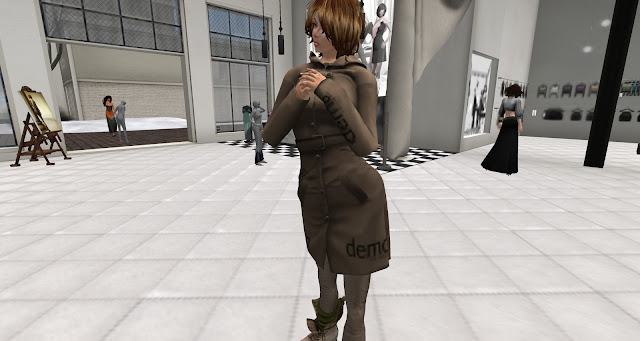 Well, I just happened to catch an avi trying it on. Iris' photo is every so much better: 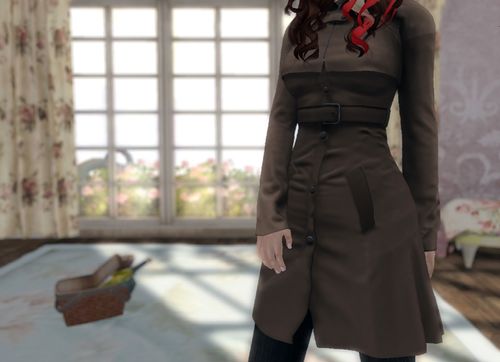 Kelley wasn't a cheap date, however. Or I didn't think so. I blush to tell you that last night I read the price at $1600 Lindens.

Today, when I revisited the store to get photos, I realized I had priced the fat pack. The coat costs only $400 Lindens. And now, after making two purchases last night, I have only $L338! Horrors!

Damn, i want that coat! And in the taupe color, too!

Posted by Cheyenne Palisades at 9:58 AM 2 comments