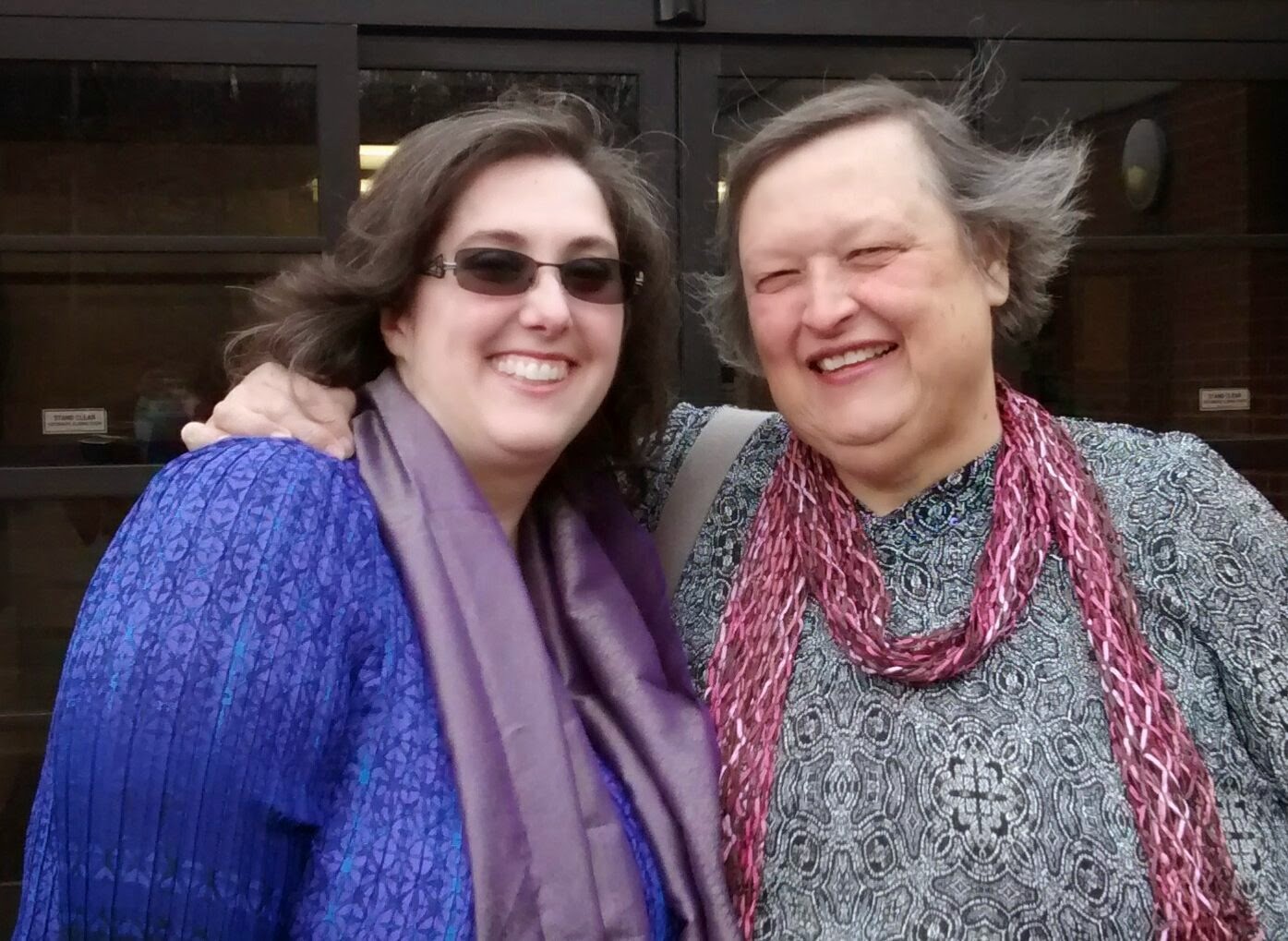 On Thursday, April 23, the humans behind the avatars Cheyenne Palisades and (the ever elusive) Sweetie tied the knot in Rockland County, New York. That's me on the right.

My sister and Sweetie's parents were in attendance and served as witnesses.

I'm now catching up, writing about what's been going on with us and why we've not been in world much.

In more than 2000 posts on this blog I have been extraordinarily careful with Sweetie's real life name and even her avatar's name (although anyone can find out the latter just by looking at my avie's profile). I am breaking with tradition just this once to let people know Second Life can be transformative of our first lives.
Posted by Cheyenne Palisades at 5:37 AM 8 comments

So, what transpired during my period of absence from this blog? Lots, cumulating with my marriage.
Days after I arrived in New Jersey, winter set in in earnest. The jet stream veered to the south and the resulting front dumped a foot-and-a-half of snow on us. Temperatures plummeted and stayed below freezing for some six weeks. Occasionally it would venture above freezing in the middle of the day, but there was little melt-off and it would snow every few days. Thankfully, though, after getting slammed that first time the heaviest snow would hit toward the north or south or west.

Snow staying on the ground was something out of my experience. In the warmer climes where I had always lived roads would be bad for only a day or two and the snow would be gone not long after that. Now there was perpetual snow.

It took hours to shovel ourselves out after each snow, even with the help of the electric snow blower we had just purchased. We spread salt liberally and even though we had salt delivered, we had to frequently venture to Home Depot for more.

A huge ice dam formed on the eaves near the front door. A ton or more of ice threatened to bring down the gutters and there was risk of the house flooding when it melted. I hadn't even known what an ice dam was!

Road crews did a great job of keeping our street passable, but shoveling snow and chipping ice was a daily chore. Our cars were repeatedly covered with ice, but thanks to a Christmas present from Sweetie's parents, our windshields were kept clear-- so long as we remembered to attach the plastic screen they had given us. We weren't lacking for food or warmth and were snowbound only infrequently and for short times, but everything was inconvenient. The mud room at the front of the house was a mess, fill with shovels, brooms, snow blower, salt, boots, wet mats, and broadcast spreader, and we were unable to dry it out. The layers cardboard we had put down on the walkways during the load-in was frozen to the concrete-- nor could we keep the stoop clear of ice. Stepping outside was a perpetual adventure.

It was a full six weeks before the weather began to improve, and only since the first of May has it begun to look like spring here.

Posted by Cheyenne Palisades at 4:02 AM 0 comments 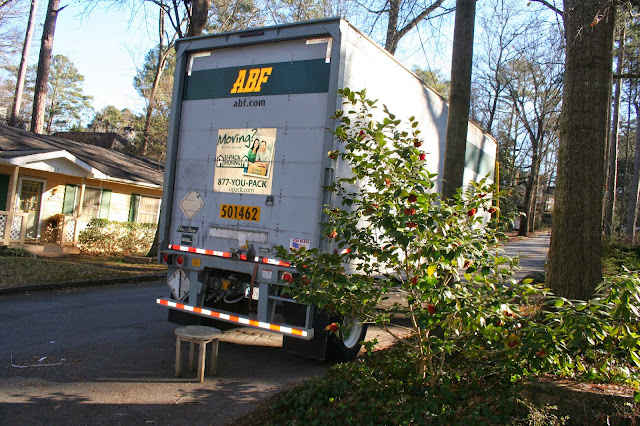 Moving these days is not a trivial undertaking. That's because the carload of belongings from college days has somehow multiplied into a load sized for a moving van. It no longer fits into even the largest U-Haul truck. If I moved via U-Haul, I discovered, I would have to drive north in a 26-foot truck, fly back to Atlanta, head north in a second truck, and fly back again to get my car. Not great.

Rather than a full service moving company I opted for You-Pack. I rented a 26-foot trailer, loaded it, and rented about a third of a second trailer for the remainder of my stuff. Professional drivers would take them north.

I hired loaders through U-Haul's Moving Help subsidiary. They did a great job on the many boxes I had packed, but turned into animals when it came to the furniture. They refused to disassemble my metal desk and waterbed pedestal (which has 12 drawers) and moved them still together, and worse, in their effort to show everything would fit on the first trailer, loaded it so full they were unable to put U-Pack's load-holding partition into place. I let that stand because the trailer was packed so tight I figured the load would ride just fine.

I couldn't have been more wrong.

The second trailer, which was filled with boxes I had in storage, made the trip just fine. The first trailer, however, was a hot mess.

I'm not certain just what happened on the trip, but I can only assume the driver unhooked the trailer and rolled it down every hill between Georgia and New Jersey. The entire load was upside down. My antique tiger oak Stickley-style library table was smashed do kindling, my desk, which I had used since 1978, was twisted like a pretzel, and all my furniture had taken damage to the wood. The gas tank from my cute little 1971 Honda CL70, which had been pristine, wound up upside-down inside its box with the beautiful silver metallic paint ruined by gasoline. The entire load, and consequently our house, smelled of house for weeks until we had tracked down and removed the boxes that had absorbed the odor.

I had had to suck it up about the damage-- mainly because of the partition not being in place. Still, an ABF driver somewhere deserves and ass-kicking,and I hope he or she gets it. The driving had to be rough beyond imagining for so much havoc to have been wreaked.

The Honda's gas tank has been repainted and I'm due to pick it up. I found a library table exactly like mine on eBay at a great price and purchased it. I'll use it for a desk when we get my home office set up. 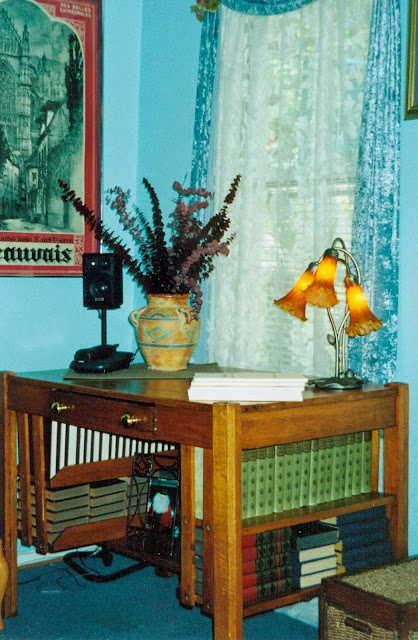 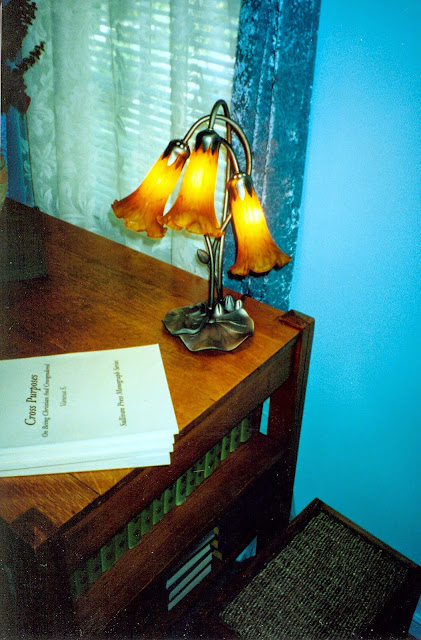 The house was a jumble of boxes and broken things which Sweetie and I have been slowly returning to order.
Posted by Cheyenne Palisades at 5:34 AM 1 comments

My household belongings arrived in the middle of the harsh weather-- after dark and in a trailer so tall it knocked down a neighbor's cable line and I got to meet the police. The trailer was forbidden to return and I had to rent a U-Haul truck and pay movers to transfer and then unload and carry in my stuff. Several hundred trips in and out on a slushy day made a mess of the floors. Fortunately, Sweetie had researched floor protection and we installed layers of 3M sheet plastic and stiff paper on the floor in the days before the move, so there was no damage to the house.

My belongings were another story.
Posted by Cheyenne Palisades at 4:43 AM 0 comments