"Fortunately," Sweetie said," waggling her katana to emphasize her point, "we know some things about our amateur bobnappers."

"We do?" I asked, thinking I should perhaps duck.

"Certainly, she said. "We know, for instance, they carefully scouted the locations for the snapshots of Bob. They went to Splo, for instance."

"Right," I said. "Where else would one find such a mass of drinking birds?"

"Considering the horrid state of search in Second Life," continued Sweetie, "our amateurs must have made a concerted effort to find the only place in Second Life with more drinking birds than Whimsy. That suggests Deduction One: discipline and attention to detail."

"Attention to detail, check," I said.

"Our bobnappers also have a deep reverence, almost a fetish, for old-fashioned technologies. That's Deduction Two."

To which Sweetie replied, "I mean FILM, for goddess' sake? FILM!"

"The bobnappers also sent postcards of a rural setting and an old Ferris wheel at Paris 1900."

"So that's what that was!" I said. "The coffee stains made it difficult to tell."

"And what else to go with pastries," Sweetie exclaimed brightly, "than coffee? [Editor's comment-- Unless you're British, of course.]  If I had been reading your blog more closely I would have solved the case when that photo first went up!"

"We do?" I asked. "I was starting to get annoyed playing Watson to Sweetie's Sherlock.

"We do," she said. "Please don't get annoyed playing Watson to my Sherlock!"

Hmmm, maybe she was reading my blog after all! 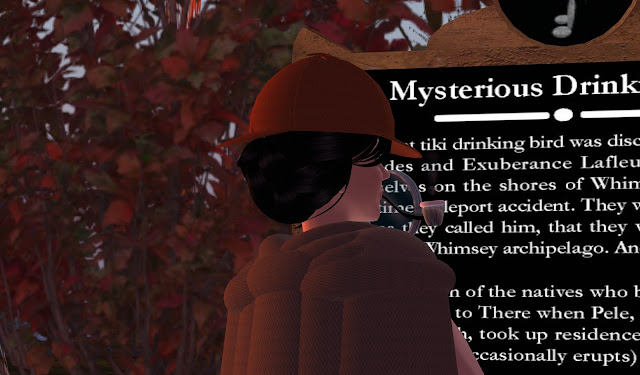 Sweetie said, "We know this why? We know this because it's no small feat to shove a reluctant, 3000-year-old, deified 20-ton drinking bird into a chapel barely big enough to hold his head or lure him to the high decks of the Eiffel Tower. Both sims are, you will note, no build-- and Paris 1900 is no-fly. Definitely, these bobnappers have tricks up their sleeves."

"You keep saying they," I said. "Maybe there's just one Bobnapper."

"No, no," said Sweetie. "Which brings me to Deduction Four: The fingerprint and saliva DNA on the cards have two distinct UUIDs, meaning they come from two separate avatars."

It took me a moment to digest this.

"Deduction Five: It's clear the Bobnappers knew us well enough to think we would pay to get Bob back, but not well enough to know we would track them to the ends of the Metaverse. Or they thought we weren't capable of hunting them."

She continued. "My preferred theory is this: an arrogant personality is taunting us, daring us to figure out who she and her cohorts are."

"Look at the postcards," she said. "See the writing. I told you the ink was a clue. Have you guessed why?"

"No," I said. "I've been so busy typing this I've had no time to think. The ink is made from confections?"

"Precisely! And the finest of confections! Glaze. Raspberry jam. And darkest chocolate. Here's Deduction Six:: The chief Bobnapper wanted to point the sticky-sweet finger of guilt at not just any confectioner, but at our good friend BonBon Michelin. But that sticky finger points to only one person-- the most arrogant, heartless, donut-grid-connected villain in the history of binary!"

"Oh, you're so close!" said Sweetie, in her excitement cleaving a prim in two with her sword. "The SEVERED HEAD of ImSoNotADiva Bartless is the mastermind of this crime!"

Posted by Cheyenne Palisades at 10:55 PM