Goats and Stuff at Firestorm Island 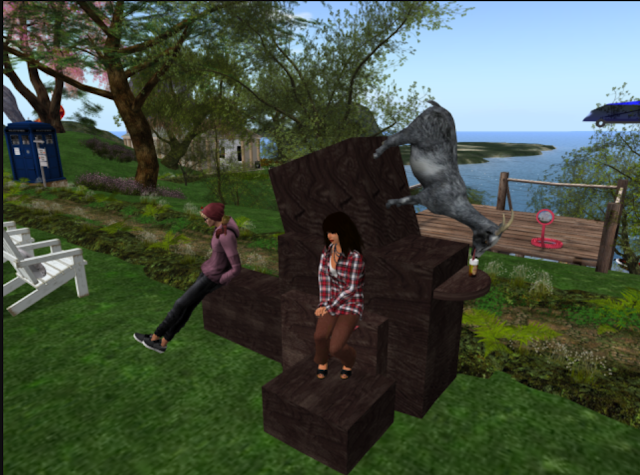 When the Lindens decided newbie me was sufficiently trained to walk, they sent me to the mainland. I arrived in the midst of blooming, buzzing confusion of Ahern, one of the old-school Second-Life welcome areas. It could just have easily been Hanja, Violet, Waterhead, Plum, Nova Albion, Moose Beach, or one of the many others, but it was Ahern, and my home was set there.

Ahern abutted three other regions, and the welcome pavilions were on the sims corners, so it could be a crowded place--and it was chaotic beyond belief. New chums were constantly rezzing, looking bewildered, and disappearing, some, and probably most, never to return. People who had been around for a while would hand out and torment the new and vulnerable. There was no end of rude gestures, verbal abuse, bizarre avatars, spur-of-the-moment friendship requests, and nudity. It was polyglot bedlam, no place to get dumped on your very first day in world.

I thought then and I think now the Lindens were shooting themselves in the foot, for who knows how many tens or hundreds of thousands of avatars were scared away by the very places that had been designed to nurture them.

"I didn't. It was loud and chaotic and crowded and ugly. I got called all sorts of names and all I was doing was standing there."

I came into world in 2006, when Second Life was being heralded in the press as the future of everything. I'm sure the Welcome Areas played a prime role in putting an end to that speculation. So, too, did Second Life, itself, or at least the mainland, with its profusion of full-bright, badly textured objects, cows and cars floating upside-down in the air, and general emptiness.

My second life truly began when I weaned myself from Ahern, but I confess a strange fondness for the place, bizarre as it was. I confess to making the rounds every few years to Ahern and the other welcome areas, just to see if they're still there and to help new and confused residents. The welcome area all seem to still be here with the same prims and the same spaces. They're mostly empty, but people still hang out in them still in small numbers.

For some years now most new residents find themselves in monitored, privately-owned welcome area like New London or Caledon or New Citizens--which is a good thing. There seem to be a lot fewer new folks these days, and it's good to know there's less of a chance they'll be scared off by batshit crazy vampires and domestic drama and giant penis bikes. Monitors do a good job of keeping things under control, and new people are far more likely to get assistance.

Today I took myself to Firestorm Social Island, a nice place.

There were a dozen or so people present, mostly new folks. The monitor (who I won't mention by name because I didn't ask his permission) greeted those arriving and offered suggestions to several avatars asking for help. After a while he rezzed a prim and stretched it out and sat on it. There being room, I sat on it, too.

There wasn't a lot of conversation. Two avatars were talking in French about Second Life being a place with a lot of bodily males controlling female avatars. It seemed to bother them, which I suspect amused the monitor, whose profile identified him as gender fluid. The rest of the conversations consisted of "I'm confused!" and me getting hit on by an avatar called Yogi, who insisted via semi-literate IM that I teleport to him.

"Men have entirely too high an opinion of themselves," I replied, feeling entirely for a moment like Laura Wilder in one of the Little House books.


I had been been working for several days on an exasperating scripting problem and was in need of interacting with others. And not Yogi.

Then the monitor, who had refashioned the beam on which we were sitting into a pair of couches, rezzed a goat.

Just what I needed! A prop!

I started making comments about the goat. "Make the goat stop eating my hair!" Then I noticed there was a bottle of Guinness near the goat and accused Lester of being drunk. Yes, I named the goat Lester.

It wasn't much, but it brightened my day--and, I hope, the monitor's.