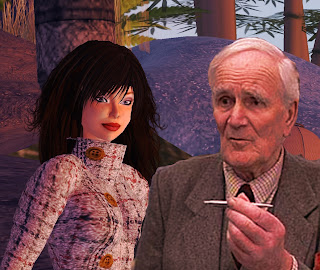 Not long ago my bald hair base went rogue. Every time I put it on I unrezzed-- turned into a cloud of smoke. I saw me as a ghost and others saw me as a ghost. It drove me crazy until I figured it out, and figuring it out wasn't easy. I mean, you can't detach or unwear bald bases; you can only replace them. And who ever does that? One baldy is as good as another.

So I was a foggy ghost, appropriate enough for Halloween. To further disguise myself, I was using a hated display name. The name I had chosen was Sarah Palin. I selected it because I was pretty sure Diva identified with Palin's sociopathy. You betcha.

I had talked AlexHayden Jumponapila into getting me an audience with Q at MI-6 headquarters. Q had liked it when I arrived with a screen full of HUDS. I was wearing a Mystitool that would allow me to cage or trap Diva, and a HUD that would search the area for any prim named Bob. A purchased compass HUD and an altimeter HUD of my own devising would keep me oriented, and the built-in radar of the Mystitool would give me notice of nearby avatars.


I was immediately attracted to Q's watermelon gun. Watermelons are large and bulky and have a great deal of inertia, making them effective weapons in any area with push turned on. Q tried his best to talk me out of the watermelon gun.

"It's still in development," he said. "Highly unreliable. Can I interest you in this shoe dagger?"

"How about a garrote watch?"

"Sweetie will be taking care of the explosives," I said.

"Second Life already has one of  those. Does your suck as much?"

"No one smokes these days."

"Those watermelon guns are tricky," Q said. "Seed shrapnel, you know. How about a nice Aston-Martin with revolving license plates and villain-catching bumper?"

"It has leather seats."

"There are machine guns concealed behind the headlights."

"It also has the infamous oil slick feature."

"It's on your head, then," Q said. "I won't be responsible if that watermelon gun gets you into trouble."

Posted by Cheyenne Palisades at 2:34 PM

Charlotte old thing, it's me!

Been away for a bit (top secret I'm afraid, hush hush, need to know basis) so only just catching up with your hunt for Bill the bobbing bird. Glad to hear Q was of some help (although he offered up my Aston? the cheeky swine!!) Does that mean I'm off the suspect list now? Because I so know that you know that I so know I'm so not Imsonotadiva Bartlett..)

Looking forward to seeing how you wrap this one up....

Perhaps I should have taken Q up on his offer of the Aston-Martin.