Reworking the Temple to the Volcano Goddess


It's great to again be working on a computer that has the horsepower to handle Second Life. I've been working on my laptop, which renders SL just fine but which won't let me cam or build, so I've had little to blog about. Now I'm at Sweetie's house, on her desktop and can more or less operate.

A long time ago I set myself the task of reworking the erupt mode of Whimsy's resident volcano, Pele. After all, when one hosts Second Life's best volcano one must be eternally vigilant lest some mesh volcano come along and steal one's thunder.

Pele has four states: Extinct, Dormant, Active, and Erupting. I made scripts to coordinate the lava flows and the rocks in the caldera; now they, too, reflect the volcano's mood.

Off to Work I Go

When I logged into Second Life Thursday morning, all of Sweetie's dwarfins had turned to stone.

I say Sweetie's dwarfins because I had only one on the land. Sweetie is determined to get a mutation, so she has three or four mated pairs. So far, no mutations, even though she keeps them busy reading and mining.

The little creatures had turned to stone because of starvation. They ran out of food while she was away. So too, nearly, did her cats, who helped themselves prodigiously to kibbles and bits during her five-day absence.

The coding for the dwarfins is just amazing. They engage in dozens of activities, and produce implements for each purpose-- weapons, hoes, books, steins for holding ale, adzes, hammers, planes-- you name it. Apparently a single prim is repurposed for each activity. That means the script sets the size, shape, and texture of the tool, moves it to the proper orientation, and causes the dwarfin to move its body in a way that causes it to use the tools.

Dwarfins creator Judy was kind enough to give me a hut and a couple of garden plots. When I set out the hut it consisted on piles of straw, wood, and stones. Over a period of perhaps a week the dwarfins would consult blueprints, measure, hammer, cut, and chisel, and soon there was a completed building with a fireplace. It is clever, clever work!

To use the gardens one buys seeds, waters them, and grows them to maturity. They resulting fruit, berries, and vegetables are then harvested and can be turned into dishes ranging from salads to pies. It's a little less expensive to feed them from the garden than it is to keep supplying them with ham.

Yes, the dwarfins, like all breedables, require a continued investment to keep them fed.

That said, they're heads and shoulders above any other breedable I've seen in Second Life.

Hours and Hours on the Road

A week ago Sweetie flew to Georgia for a visit with me-- and a wedding of a co-worker. On Monday we set out for her home in New York in my 1996 Mazda Miata.

I love my Miata, but it's perhaps not the best car for touring. Space is, shall we say, limited. I FedExed most of my clothing, but even so we were packed to the gills. You should have seen Sweetie's face when, somewhere along the road, I emerged from a mini-mart with a 24-pack of Crystal Geyser bottled water. "It was just $2.99," I explained. We stuffed 18 of the bottles here and there and drank them on the road. I have a bottle beside me as I type this.

Because of limited room in the cabin, we decided to stop every thirty minutes for a brief stretch. We did just that, but more often than not the stretch breaks became bathroom-and-snack breaks, and, as we tired, bathroom-and-snack-and-nap breaks. Before we knew it we'd been on the road 24 hours and were only halfway to our destination.

We pulled into Sweetie's driveway more than 32 hours after leaving my house, with 1024 miles on the tripmeter. The trip should have been 889 miles and 13 hours-- that's according to Google, which apparently thinks you should average 68.5 mph on the road. Maybe the Google car is equipped with a potty and a good radar detector. Eighteen hours is a more reasonable estimate (50 mph average).

Anyway, we arrived in New York Tuesday, just before midnight. On Wednesday, poor Sweetie had to go to work; I was able to spend most of the day in bed, recuperating.

Posted by Cheyenne Palisades at 6:01 AM 0 comments

Sweetie and I have been wanting to see Jason Springarn-Koff's 2009 Second Life-based documentary Life 2.0 since forever. Tonight we found it available to stream on Netflix and immediately watched it.

I'd been looking forward to seeing the film. I didn't remember anyone panning it, so I began watching in anticipation. The first hint that something was amiss was the mournful cello playing.

Now I love to hear a cello. I fell in love with the instrument not via Tchaikovsky or Mozart, but on the title track of the Bee Gees' album Odessa. That cello is haunting. Tonight's cello seemed to be playing a dirge.

It was a logical choice for the soundtrack. The movie was, as Sweetie wrote in an online review immediately after seeing it, relentlessly negative.

Springarn-Koff's film follows four Second Life avatars over a period of a year or so, with periodic head shots of SL founder Philip Rosedale, an appearance of the real-life financee of one of the avatars and, occasionally and briefly, the filmmaker's avatar. In the tradition of Frederic Wiseman, there is no voiceover. 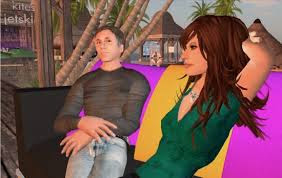 The movie opens with avatars and online lovers Amie Goode and Bluntly Berblinger. Berblinger describes their behavior as emotional adultery; the film maker immediately cuts to the two, who live thousands of miles from one another, meeting in real life. Emotional my ass!

Berblinger and Goode are tracked as their SL relationships end their marriages and Berblinger leaves Alberta for Goode's home in Westchester, NY. Not surprisingly, things immediately fall apart and Berblinger, after a scene in which he shows his abusive side, heads back home.


A second arc follows 11-year-old female avatar Aaya Aabye, who is compulsively played by a young man whose visage is initially obscured by shadows. Eventually he is shown full-face, which made Sweetie and I wonder if, as the filming progressed, Springarn-Koff was pressuring him to increase his exposure. Aabye is eventually killed off (account closed) by her maker with his engagement still intact, but an ensuing discussion results in his financee leaving. The unnamed young man then creates a young male avatar and comes to consciously acknowledge that he had been sexually abused by his father when he was a child. As a mental health professional I'm often skeptical about such recovered memories, so it's entirely possible it's something he cooked up in his head. It's also entirely possible that it happened. I hope he is seeing a therapist to sort himself out.

A third arc follows designer Asri Falcone, who was doing quite well as a fashion designer and creator of luxury homes in Second Life until a content thief made her creations widely available in world. As she had given up her real-life position to work 15-18 hours a day with prims, her finances were thrown into crisis.

Both Sweetie and I were expecting a balanced or even positive film about Second Life-- that because of what we had heard when the film was released. We didn't get that. From the funereal score to an opening shot which cuts from two married-in-real-life avatars cheating in real life to a scene in which a man with a face obscured by darkness talked about his 11-year-old female avatar to a purposefully filmed shot showing the flaws of the house in which Asri Falcone's human lives in (yes!) her parents' basement, Life 2.0 is meant to show Second Life's creepy side. The cinematography accentuates this by focusing on parts of the faces of the humans in the film. You know what, fuck Jason Springarn-Koff. He's an ass who set out to trash Second Life and he managed not to get caught in it, at least by some reviewers (the New York Times got it, though!).


There’s no excuse, though, for one reprehensible sequence in which the camera descends into the basement of a Detroit home, while a cello saws ominously on the soundtrack, and creeps up behind a large, pajama-clad woman at a computer, primarily to shock us with the visual contrast between her Second Life avatar and her actual body. It’s enough to make you want to escape the real world.

Of all the avatars, I felt sorry only for Asri. Here was a talented, hard-working, positive woman who lost a business she worked for years to build to a scuzzbag who copied and sold her wares because of a bug Second Life should have damn well fixed and who was compensated only a few hundred dollars when she went to court.

Asri is no longer in Second Life; she deleted her account due to thievery and griefing (her account was hacked, large sums of money stolen, and her inventory deleted, most likely by the sumbitch who she took to court. Today she operates with a new avatar and has rebuilt her business. God bless her for her courage and stamina. Most people would have left the the world for good.

There are lots of great films about Second Life. Jason Springarn-Koff didn't make any of them.
Posted by Cheyenne Palisades at 12:04 AM 4 comments

If I've not been writing here much, it's not because I don't want to. It's because my laptop has been acting screwy in Second Life. My desktop is dead and every time I think I'll have funds for a new motherboard, processor, and memory, something expensive in my house or on my car breaks. I also got an opportunity to put much-needed new floors in my kitchen and bathroom (my ex-roommate Christine did a marvelous job putting tile in the bath and sheet vinyl in my 1940s kitchen). Chris gave me a huge break on price, but it was still expensive.

On the way home after taking a friend to the airport my Miata's brake pedal went to the floor. By using engine braking and the parking brake I was, skillful driver that I am, able to stop before I hit the car stopped ahead of me at the intersection. The Miata is in the shop getting new brake lines now. Let me just say having AAA lose my car instead of taking it to my mechanic as they were supposed to was a freak out.

Since I can't really build or use my Second Life camera, I'm not doing much in world. I miss blogging here, and will continue to write as things happen. It's just that not much is happening!