Welcome to our beautiful (and dangerous) home!

Whimsy is parkland, open to visitors. With Whimsy Kaboom to the west and Whimcentricity and Eccentricity to the south, and all sorts of ridiculous builds in the sky, there's much to see.

There's much to read, too. Whimsy's extensive signage tells the sim's tragic yet humorous entirely bogus history (see below).

Even the hummingbirds are a menace! 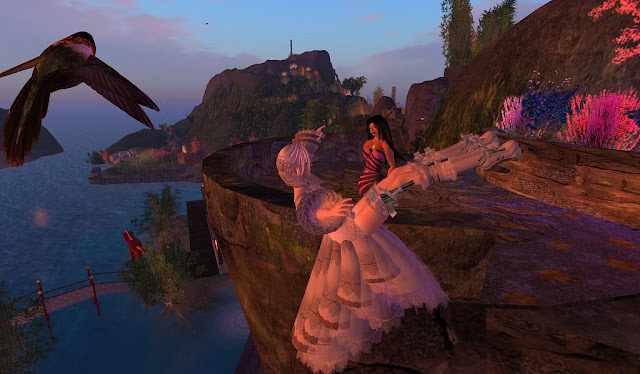 There's lots for visitors to do at Whimsy. Our guests can:

Whimsy is a tropical volcanic island, formed from lava and sand. The original inhabitants departed after the volcano goddess Pele lost her temper; a cataclysmic explosion sent ash and molten lava onto the land below and blew out a side of Pele's classical conical caldera. The natives immediately departed in search of a more boring simulator. So, too, did Japanese and Chinese merchants who had long engaged in trade here. Remnants of all three cultures are evident in the form of tikis, garden structures, and houses.

Whimsy was rediscovered by Cheyenne and Exuberance when they found themselves on its shores after a freak “routine downtime” Second Life teleportation accident. Fascinated by the Paleolithic drinking bird they found on the shore, they claimed the land and declared Whimsy an independent nation-state.