I wrote this post in response to Strawberry Singh's Second Life Challenge about love and dating in Second Life. I usually don't respond to blog challenges, but this one spoke to me.

1. Do you date in Second Life?

I have not dated in Second Life, and dated only a couple of times in real life, I take romance and love when it comes my way, and that never happens when I'm looking for it. I learned that quickly after a couple of dates as a teenager. It put me off. The girl was expected to defend her virtue, and the boy was expected to do whatever he could to violate it. It was sickening.

I did not come into Second Life for romance. It wasn't on my mind, but I immediately found it. I was in world less than a month when I chanced across an avatar with whom I quickly and deeply fell in love. Today, ten years later, I am just as deeply in love. Happily, she is as much in love with me.

2. Share some locations in Second Life that you think are ideal to go to on a date.

Second Life is full of romantic spots. My love and I never went to them; instead we went exploring for the ridiculous and the sublime in Second Life. Nowadays we hang out at our regions Whimsy and Whimsy Kaboom, which were influenced in many ways by the no longer extant region Privateer Space.

3. Share a story of one of your favorite dates/proposals you’ve experienced in Second Life, or something someone has done for you that meant a lot.

I wouldn't call it a date, as we were just hanging out, but one of my best times in Second Life was an evening with Jesse Prior, who had a habit of suddenly and instantaneously turning into an accordian-playing robot gorilla. Our time together began with me showing him a garden, progressed to Jesse pulling out an assortment of free vehicles, all of which crashed and left me stranded, and ended with me falling out of the sky onto the doomed ocean liner Titanic. You can read about that night right  here.

4. Have you ever fallen in love in Second Life?

Oh, yes, quickly and deeply. I was in world less than a month. I saw her building a fountain on a hill in Dreamland Asia and said hello. She wound up building a custom house for me for the absurdly low price of five hundred lindens. When her property disappeared because her no-account boyfriend didn't pay the tier, she came to my property to finish the house. By the time it was completed, boyfriend had vanished and I was head over heels. I think the moment I flipped was when I learned how badly her aged Mac laptop was rendering the world and how she had built a beautiful house she could barely see.

5. Have you ever gotten partnered or married in Second Life?

Said avatar and I have been inseparable since November 2006. It was awkward at first when we began to use voice. She was recovering from an abusive marriage and reluctant to become attached, and I had been divorced for several decades and wasn't looking to get hitched, so our romance progressed slowly. It was several years before we were partnered in Second Life.

We were 850 miles apart in the real world (fortunately, we were in the same time zone), and there was an age difference, but we clicked together on many levels. We met in real life in March or April of 2007 and I was soon traveling to New York from my home in Georgia for long visits. Fortunately, I had lots of vacation time.

Meanwhile, back in Second Life, we bought a region and named it Whimsy. We worked on all sorts of projects. We learned much about one another in Second Life, and when we were apart SL gave us a way to be together.

I retired in 2009 and our visits in real life became more frequent. We looked in vain for a house we could afford. Eventually we found one that met our requirements and we bought it in the fall of 2014. I sold my house in Georgia in January of the next year and moved lock stock and barrel to the frozen Northeast. We were married in April.

Over the years I have blogged in deliberately exaggerated ways about the mysterious Sweetie, who is of course, now my real life spouse. This began because she was protective not only of her real identify, but of her virtual one, and continued because it was so much more fun to have a Second Life mate who never shows her face for photographs.

We have been happily married in real life for three years. We have been out of Second Life for those three years because we were busy with other things and because our laptops were aging and didn't do well in world and because, well, we were together. I'm in Second Life regularly now, creating more absurd builds on Whimsy, and Sweetie, who now has an Alienware laptop, joins me on occasion. I will always be grateful to Phil Linden for leading me to her.
Posted by Cheyenne Palisades at 4:06 AM 1 comments 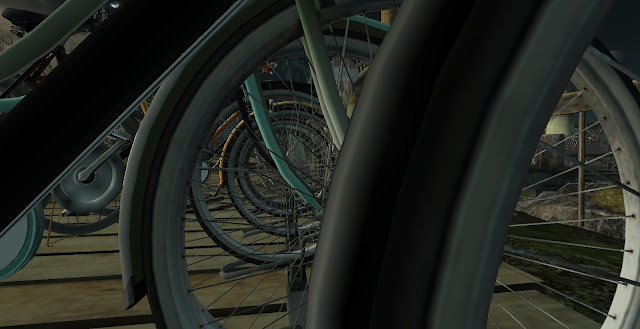