The economy of Second Life is based upon the prim-- or land impact unit, as it were. Ever region comes with an allowance of 15,000-- which is a lot, and yet isn't a lot. That's how many prims you get; you can use them or not, but you can never have even 15,001.

Sim owners often "sell" parcels of land which carry their own prim limits, or rent land and prims. They use the income this generates to help pay their fees to Linden Lab, which charges them $295 USD monthly tier per private sim (the purchase itself costs $1000 USD). They hope sales of their items and donations from visitors will get them closer to that $295 nut.

Many sim owners hope they can bring in more money than they spend-- and some do. Estate owners have found ways to make this work and buy many regions, but most sim owners hemmorhage money every month.

Owners of full regions-- and only owners of full regions-- can purchase homestead regions, which come with 3750 prims, and openspace regions, which come with 750 prims; both, like full regions, are 66,536 square meters in size. Homesteads support enough prims to allow beautiful builds and are great for private living space; many estate owners rent them for that purpose. Openspaces are used mostly to create open ocean. They have prims enough for a few boats and some land mass with trees, but it would be difficult to live on one. Homesteads cost $125 USD per month and openspaces cost $75 USD.

At about two cents per month per prim or 1/2 cent per square meter per month, Linden Lab's pricing for full regions is high indeed-- but short of leaving Second Life and going to one of the Opensim grids, there's no other recourse. The price has been stable for quite a while now-- since at least 2006, when I came to Second Life.

Over the years server software has become less expensive and immensely more powerful. Every server now supports many regions, and with style. Nothing I've thrown at my sim Whimsy or my homestead Whimsy Kaboom have caused even a hiccup.In the past overloaded sims ran slowly; now they just keep humming along even when abused.

No, I'm not saying you can't grind a sim to a halt. I'm saying it's difficult to do so without actively trying.

Linden Lab hasn't passed on its lower prices to its customers. Regions still cost the same. And surprise-- the grid, which was growing rapidly back in 2006, is slowly getting smaller as sim owners give up and abandon their regions.

If the Lab were to drop the monthly tier for sims, I'm convinced there would once again be runaway growth in Second Life. I do, however, understand how doing so might be a scary proposition for a company whose primary source of income is rental of virtual land.

So here's a thought, Linden Lab: why not give us more prims? Why not go from 15,000 per full region to 25,000 or even 30,000? After all, thre's no 15k prim limit in some Openspace regions? Sim owners would be able to cut rental prices and still  make their sims more intricate and more lavish and thereby more attractive. They would be able to accommodate more tenants and give those tenants more prims than they can now.

Upping the prim allowance might make the servers work a little harder, but there seems to be power to spare. There would be little risk for the Lab, and, potentially, much to gain.

It's a mystery to me why Linden Lab hasn't already done this.
Posted by Cheyenne Palisades at 11:52 PM 0 comments 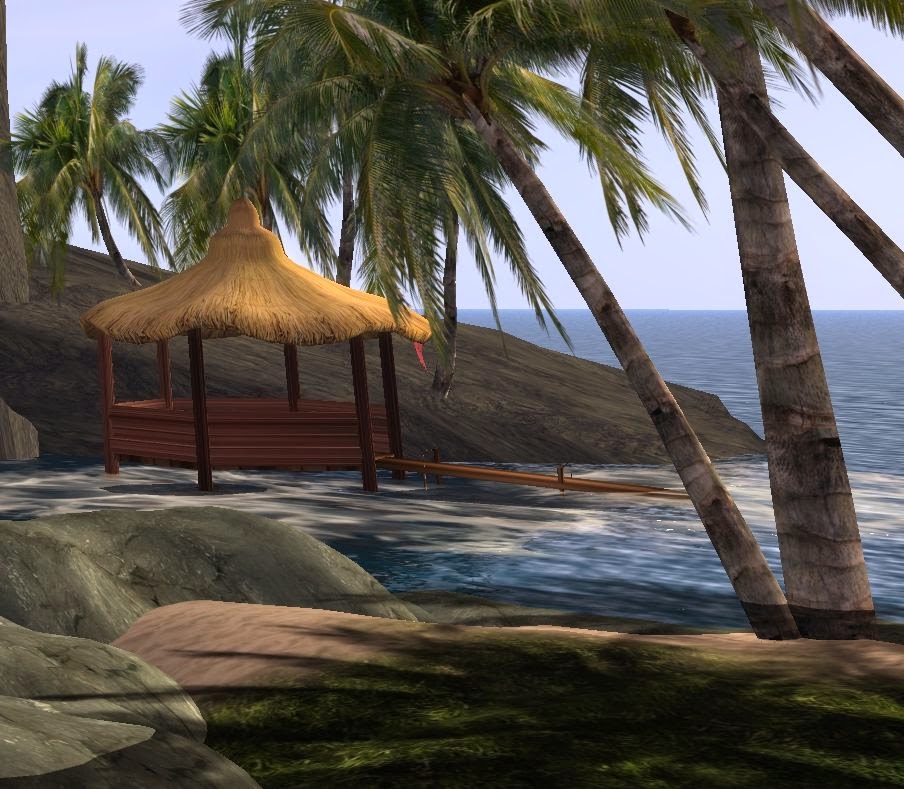 Awhile back I reworked this space on Whimsy Kaboom. 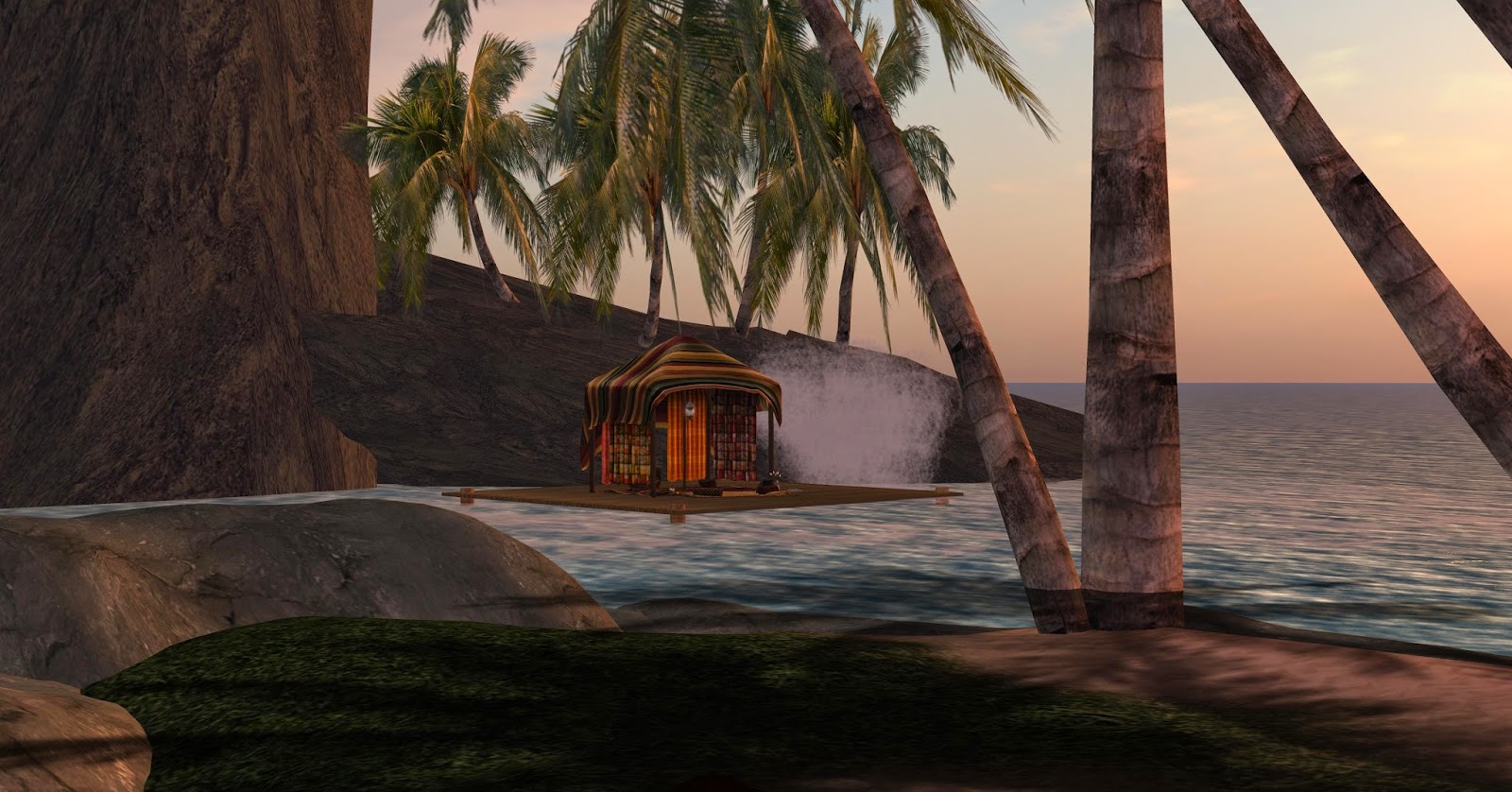 The original cabana was some stupid low number of prims-- four, perhaps. It looked okay, but seating was strange.

Now a  little mesh (?) tent sits in the same space. 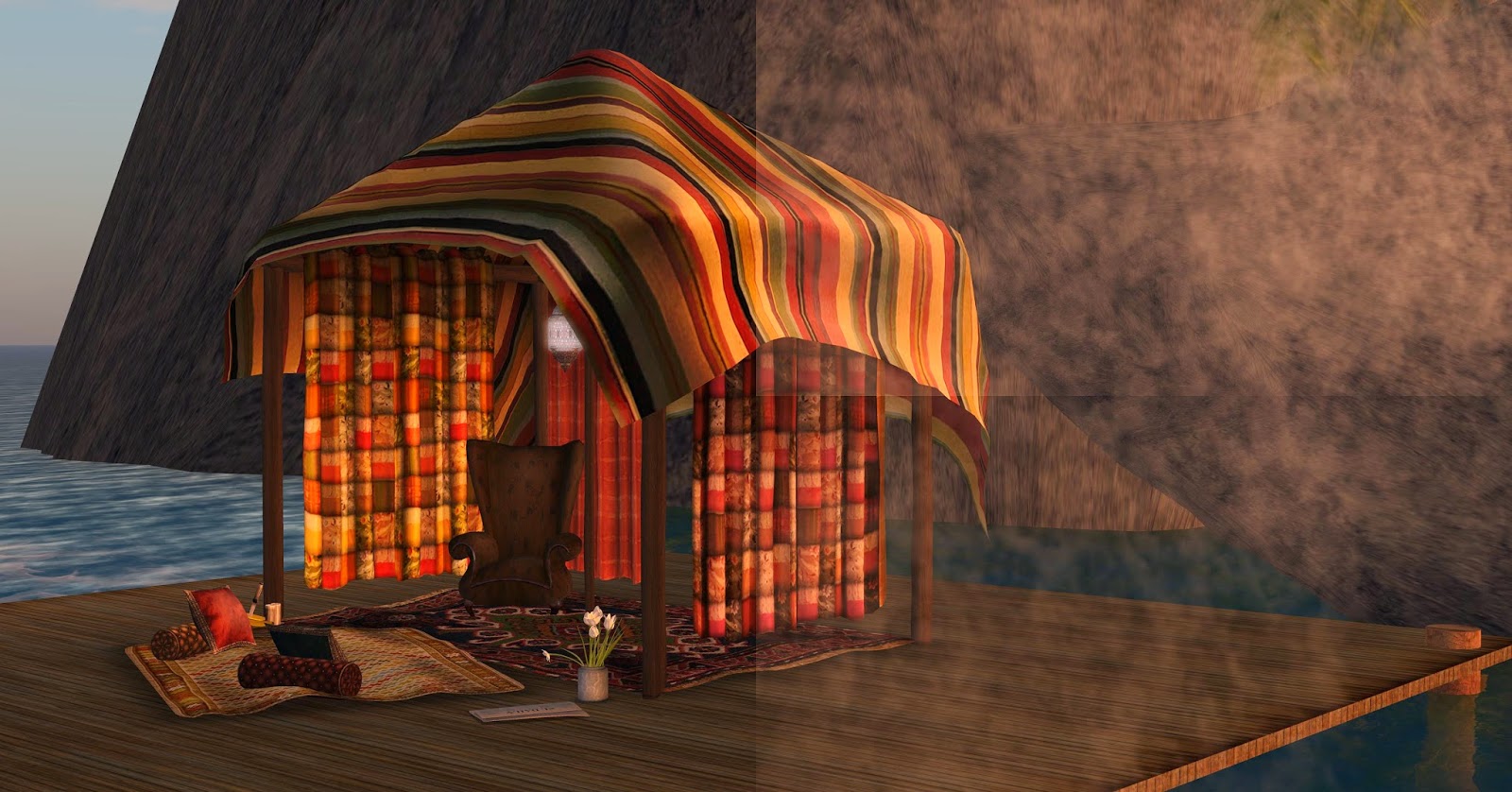 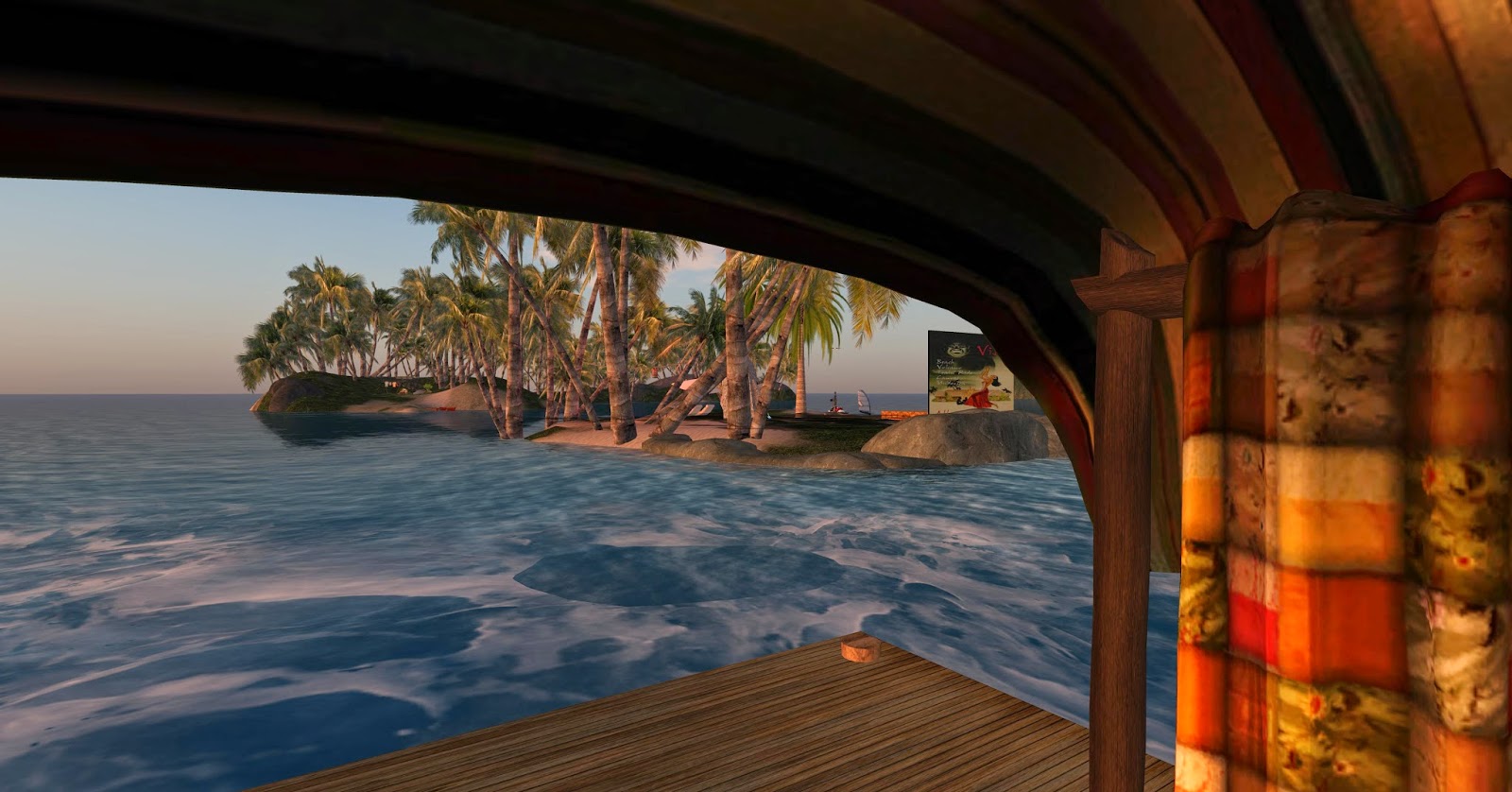 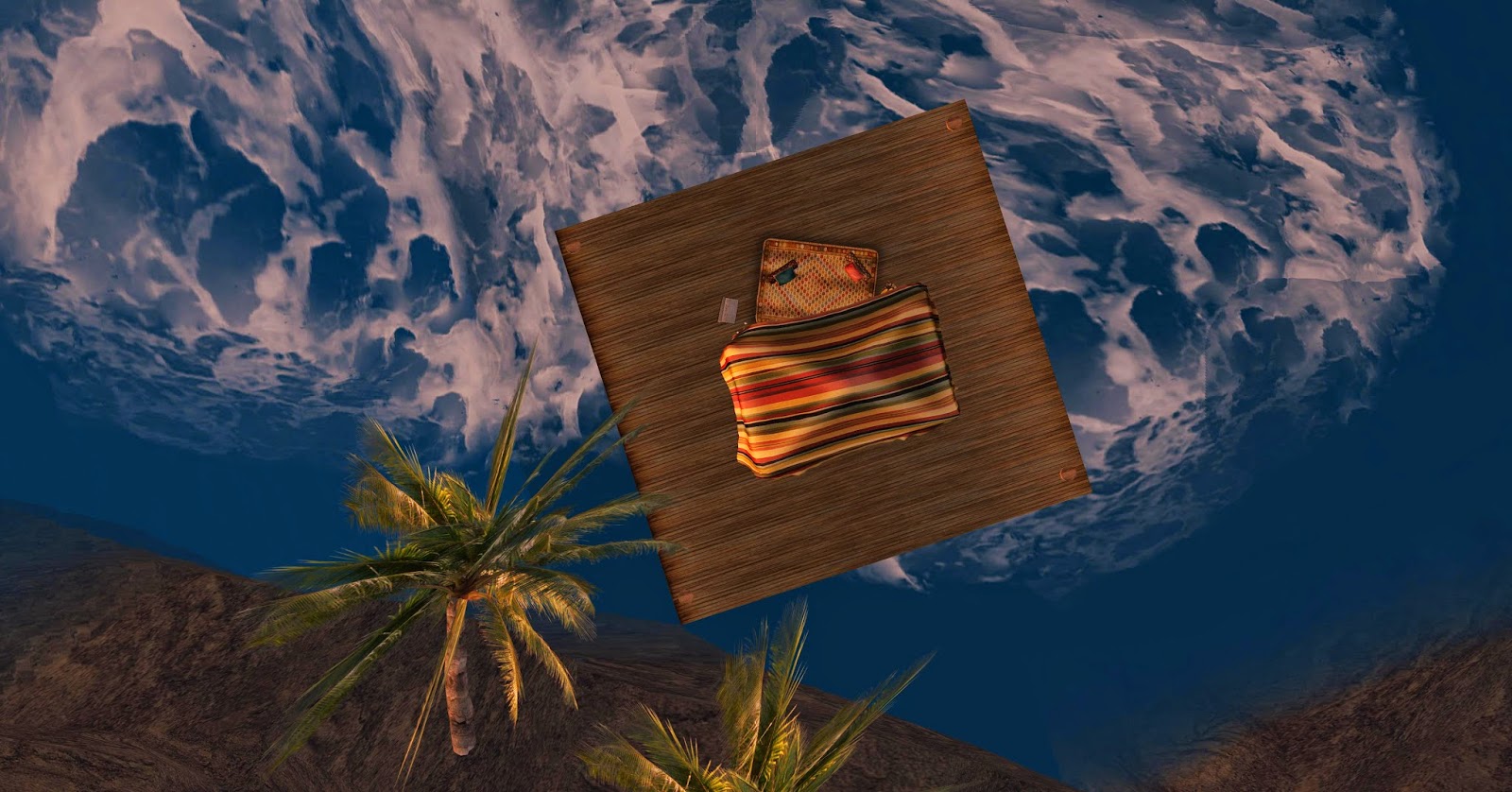 The seating is much better, and there are snacks! 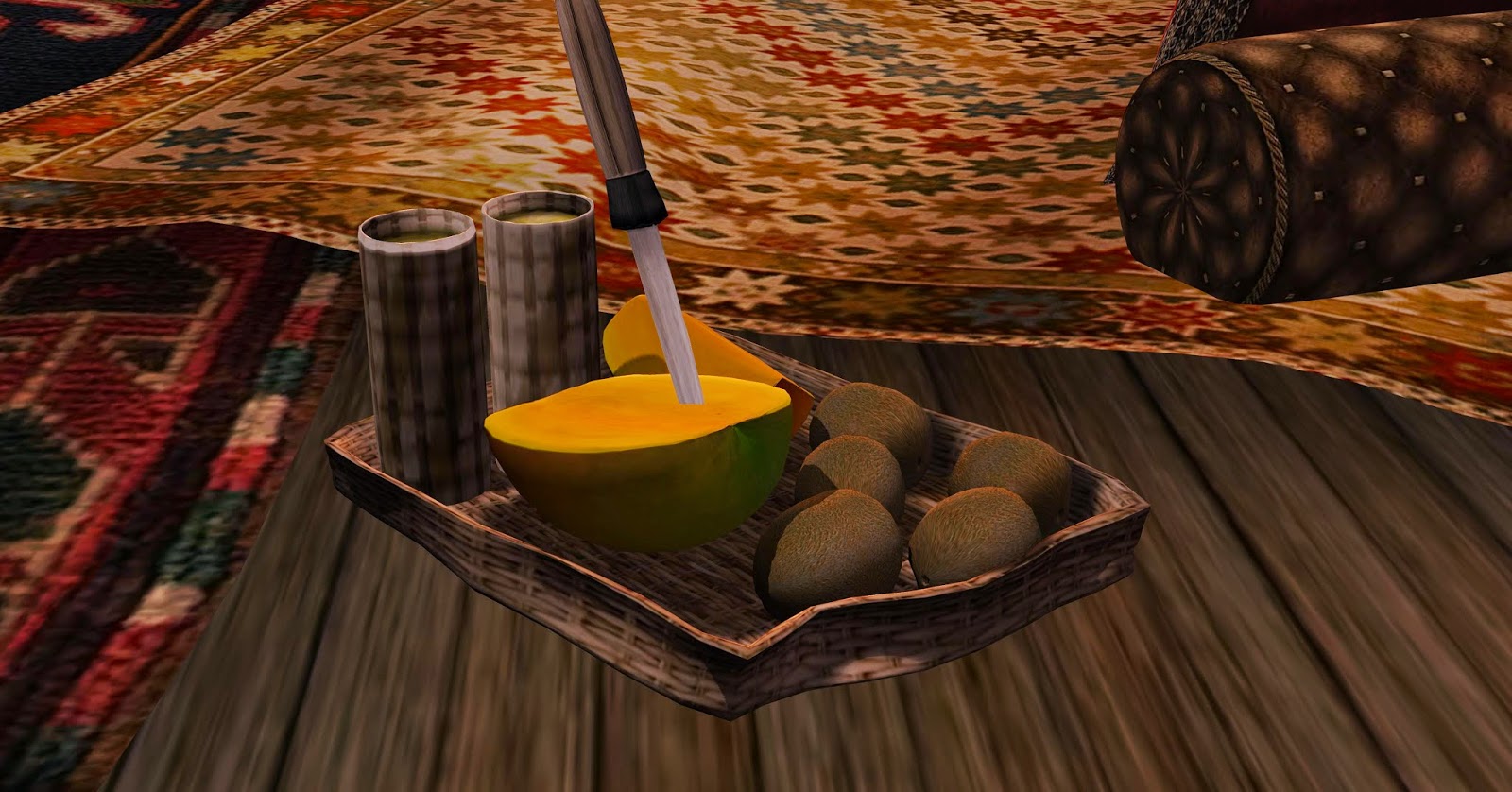 
Posted by Cheyenne Palisades at 8:19 AM 0 comments

House on a Rock


Long ago Sweetie placed a ridiculously huge prim (in the form of a giant rock) on the border of Whimsy Kaboom and Mischief.

When the deed was done she pronounced it good, but then said, "No, wait!" and tilted it a bit. "Now it's finished," she said.

Awhile back I perched a little Japanese structure at the summit, which is on Mischief. It didn't matter that there was no discernible way up there. It's Second Life, after all. We can fly.

I took the house down after a while, but my sim neighbor Leaf Shermer must have liked it. The other day I noticed she had placed a Japanese tea house of her own in the same spot. Of course, I just had to tweak it. 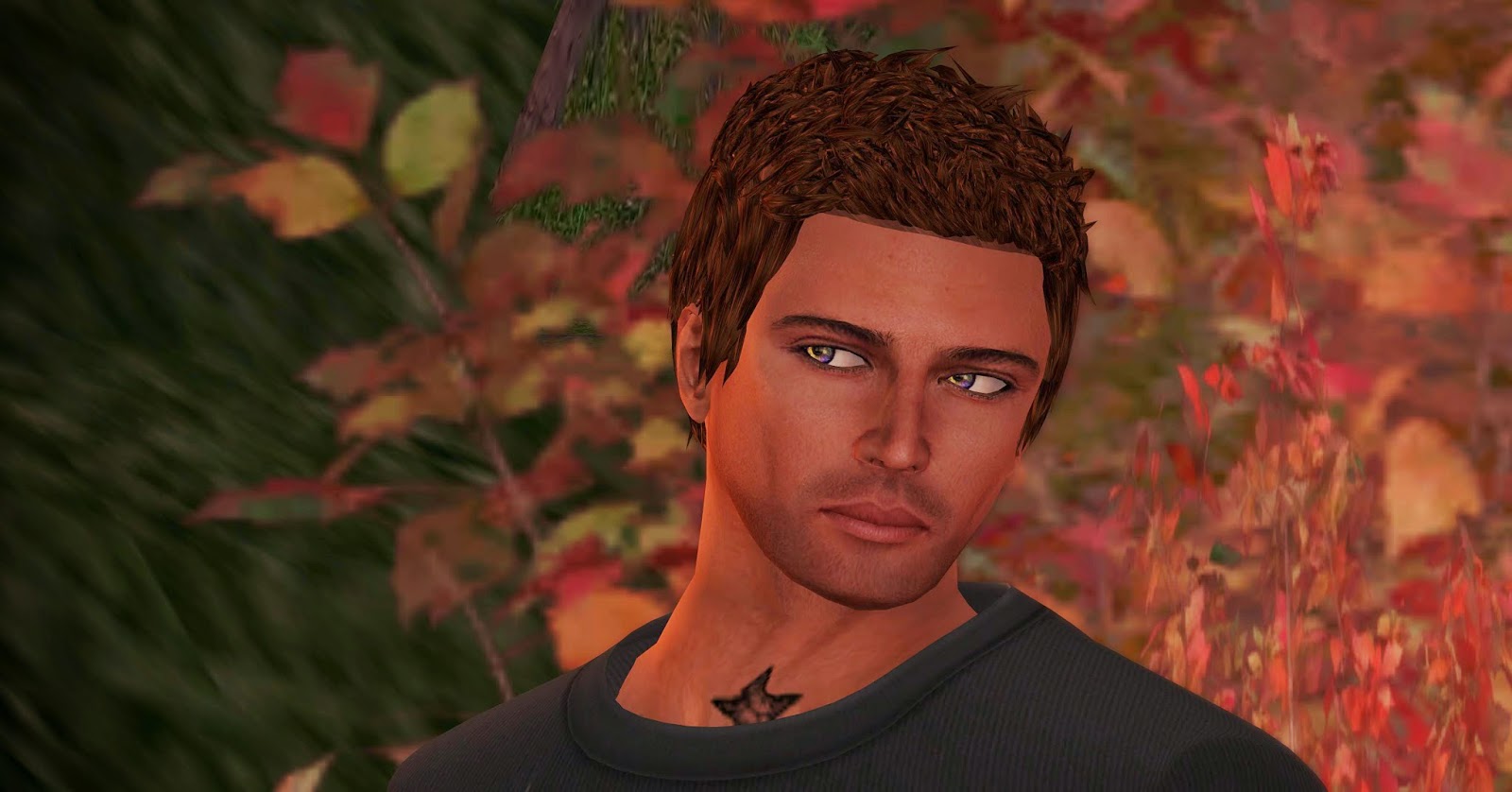 Yesterday I got an IM from someone who said he read in this blog that I make profile pictures for folks. Goddess only knows how old that post is! He asked how much I would charge to make one for him. I told him I wouldn't charge him at all.

I had been on my way up our suborbital asteroid retreat and typed gth 4000 (which, if you're using Firestorm, will take you to 4000 meters instantly, unless the sim you are in is set to prevent that). Unfortunately, I typed it into the IM box instead of chat.

I asked him if he would prefer a natural background or something formal, and he said natural. I teleported him to Whimsy, zoomed in on him (CTRL-0), and in a couple of minutes showed him my first attempt (above). He was thrilled with it, thanked me, and we were done.


Posted by Cheyenne Palisades at 10:17 AM 0 comments

Not the Right Question to Put to Bob


Sweetie thinks we should revitalize Whimsy by judiciously removing some of our older prims and replacing them with objects that take advantage of new developments like mesh and materials. I don't disagree, but I think we should take care to preserve our ancient six-year-old heritage.

Actually, our heritage goes further back than that, perhaps as far back as 1993. We found Whimsy, you see, much as it is today, it having been abandoned by its indigenous peoples when the volcano goddess Pele erupted once too often.

On of the things Sweetie and I found when we arrived on Whimsy (having gotten there by a freak teleport accident) was Bob, our giant granite Paleolithic slightly-deified drinking bird. Bob is an icon on Whimsy and has served faithfully, moving mindlessly up and down since Whimsy was a newborn sim.

In keeping with our renovation program, I asked Bob how he would feel about an update.

Bob, you see, is made of old-fashioned prims. When he was created there was no mesh; in fact sculpted prims were yet to be introduced. I wondered how Bob would feel about an all-mesh body.

For the first time in six years, Bob stopped moving.

This spelled disaster for Whimsy, of course. Bob, by his motion, pumps not only our fresh water, but petroleum to power our assorted vehicles and  molten rock to keep the volcano Pele supplied with lava. Not only that, we transform his kinetic motion into electricity to bring you, among other things, the paper upon which this blog is written. A motionless Bob was not good news.

I mentioned that Bob is slightly deified. He was worshipped by Whimsy's original inhabitants and Sweetie and I find him more than a bit godlike. I realized how badly I had offended him by suggesting he be made of mesh.

"Please Bob, bob!" I pleaded. But he wouldn't move. Not unless he was paid tribute in the form of a sacrifice.

"How about a Linden palm tree?"

"My best outfit? The one I'm wearing? It's from Paper Couture!"

"No, you can't have Sweetie! Sweetie is mine! And not me, either."

We settled on a group of flat prim fish I had purchased by mistake. Like the flat prim robin I threw in for good measure, Bob is once again bob-bob-bobbing along.

We call him Bob because he does.
Posted by Cheyenne Palisades at 12:50 PM 0 comments

Peacock Hunt Fails! or A Good Peacock is Hard to Find


I'm back from an exhausting grid-wide hunt for peacocks.


What I didn't find was a peacock to rival Julia Hathor's. Her beautiful peacock wins a reprieve on Whimsy!
Posted by Cheyenne Palisades at 8:13 AM 0 comments

Oh, Valiant Peacock! How Well You Have Served! 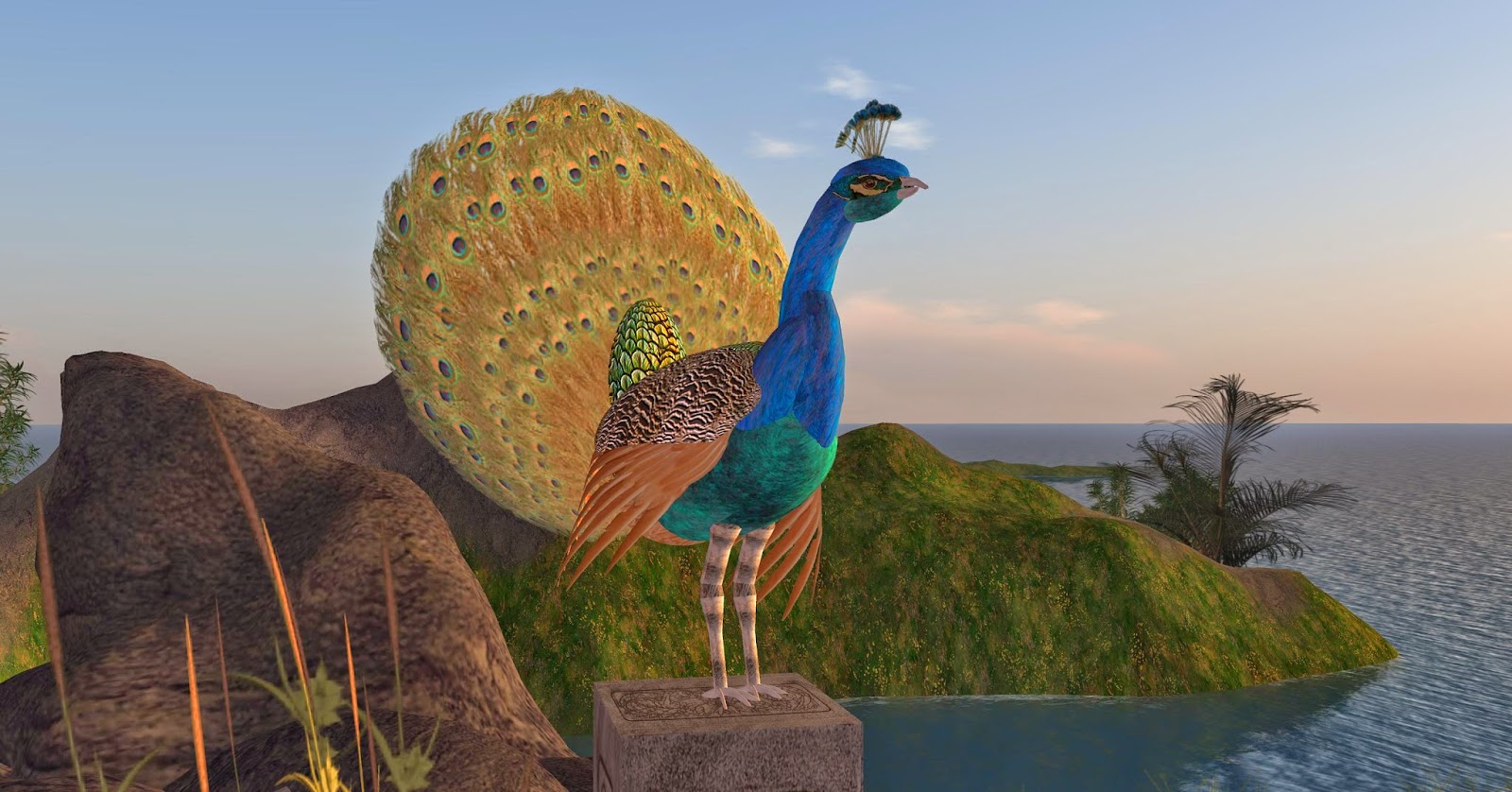 This beautiful peacock, which was created by Julia Hathor, was given to me in early 2007 by my friend Melissa Yeuxdoux. It valiantly stood guard at our former home, Pele, on the now-defunct Forsaken sim, and, for five years now, has stood on a post on Whimsy.
Posted by Cheyenne Palisades at 7:21 AM 0 comments

I've not been in world much for the past couple of weeks (I've been preparing a paper I'll be presenting at a conference in a couple of weeks), but Whimsy's little train sends me an instant message whenever someone drives it, and the messages goes to e-mail, so I knew a lot of people had been riding.

At first I thought someone had told their friends about it or mentioned it in group chat, but my friend Petronella told me she saw Whimsy featured on the startup screen of the Singularity viewer. Imagine that!

The ride is lovely, partially in the air and partially under the sea, and the scenery is breathtaking. I have two carries out, each of which holds two people, so a total of five people can ride at one time.

You can ride the Whimsy train here. Just sit on the engine and touch the boiler.
Posted by Cheyenne Palisades at 9:05 AM 0 comments