This is What the Lost Gardens of Apollo Have Come To 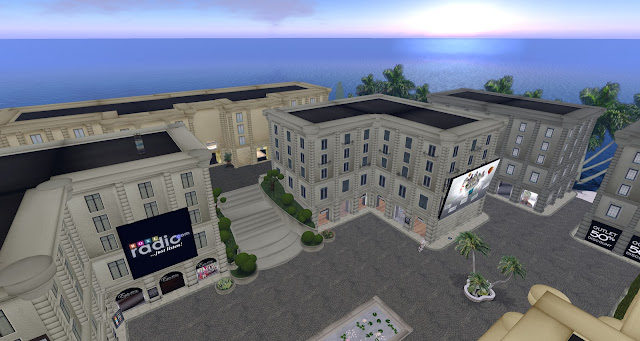 Written 18 March, 2012
This is What the Lost Gardens of Apollo Have Come To
For years the Lost Gardens of Apollo was a Second Life legend. Beautiful and serene, with a dance floor and more than a dozen hanging cupolas filled with cuddles, it was a favorite destination for both couples and singles.
I heard a while back the Gardens were in danger of disappearing because of lack of funding. And now they are gone. In their place is Da Dum! A shopping mall.
Of course it would be a shopping mall.
I had a folder of shots from the Gardens, but it seems to have disappeared. I have only this shot of Bob, Whimsy's giant granite drinking bird, on holiday there. 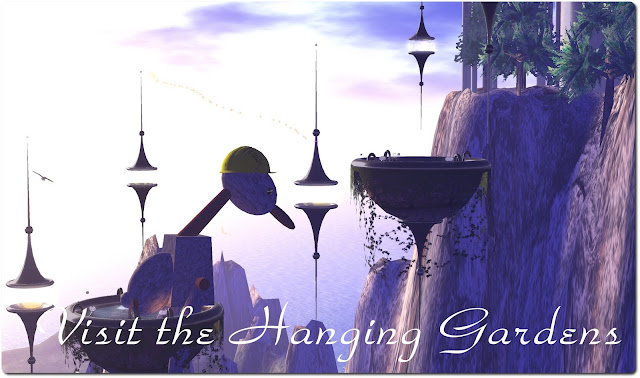 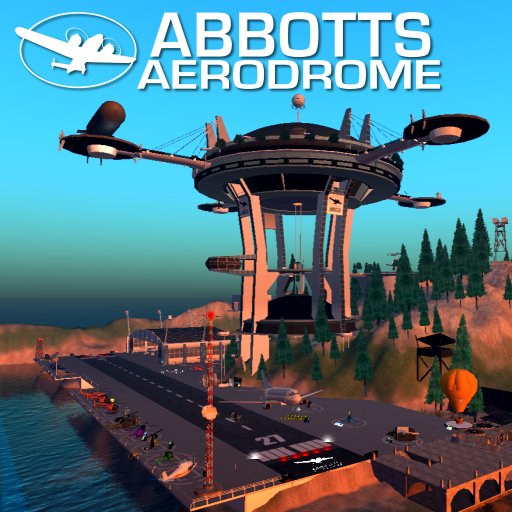 The other day I took myself to Salazar Jack's seaside village near the Forest of Kahruvel to get some photos for a blogpost. Afterward I flew to the adjacent sim to visit Abbott's Aerodrome, one of Second Life's legendary builds (it dates from 2004). Abbott's is where one went to buy parachutes, airplanes, and lighter-than air craft. There were helipads and skydiving platforms on on side, and, on the ground, a runway for aircraft.

I say went, because although the structure was still there, the merchandise was gone. Abbott's was eerily empty. 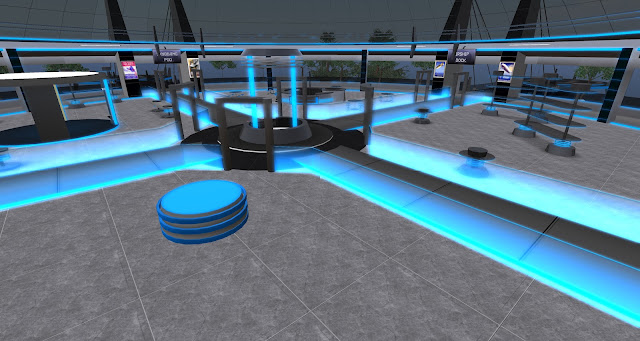 The airport was virtually empty as well.

I checked the Second Life Marketplace and some of Cubey Terra's builds were for sale, but only a fraction of his inventory was represented.

I hung around for a while talking about old timers with a couple of other ca 2006 avatars, but we only succeeded in making ourselves depressed.

It's sad to see another great old Second Life feature about to (presumably) disappear.

When I started this blog in November 2006 I wasn't really sure what a blog was. It was only when my friend Melissa Yeuxdoux told me she had written about me than I saw my first blogpost. I decided what the hell and opened an account on Blogger.

I was new to Second Life and unsure what I would write about, or how often. I just knew I wanted to document my second life.

And so I wrote about my initial experiences, my first land purchase, and of course my deepening Second Life and real life relationships with the enigmatic Sweetie.

As time went on I wrote about my purchase of the Whimsy sim, my experiences as a creator of content, and on the all-too-frequent boneheaded moves of Linden Lab.

In mid-2000 a glance at the Blogger dashboard told me I had written more than 1800 posts. I decided I would write a blogpost of celebration when I reached 2000-- but despite several hundred posts I seemed to be stuck in the 1800s.

I'm not sure how many posts I've written, and I'm not about to count them, but I'm declaring this my 2000th blogpost. 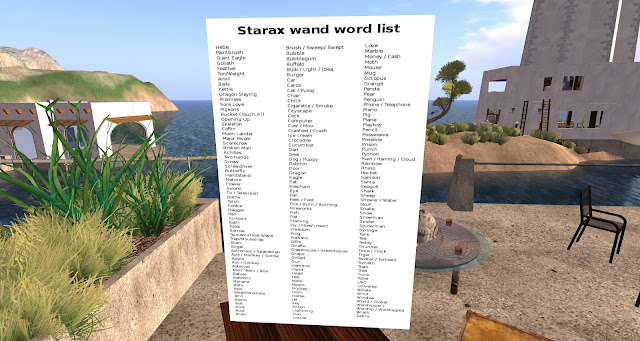 When I first came to Second Life back in 2006 one of the first things I heard about was Starax' magic wand. Even then, it wasn't available.

Starax' wand, which was expensive at a time when few things in Second Life cost more than a few hundred Lindens, would rez 150 or so items by voice command of the owner.

I wasn't lucky enough to find the wand, but I did chance across the above list of commands. I found it at the Seaside Village by the Forest of Kahruvel. 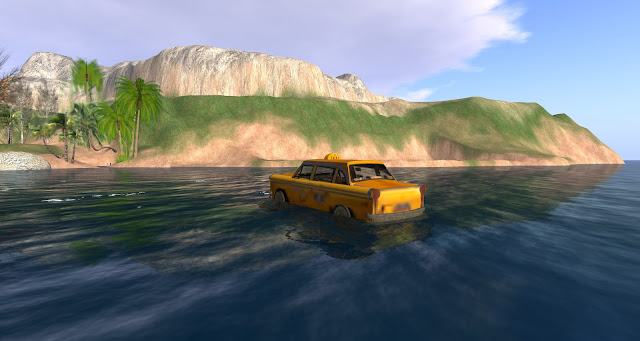 A couple of weeks ago Sweetie and I were visiting the seaside village by the Forest of Kahruvel, on the Cowell sim. As we were exploring I glanced out to sea and saw this unoccupied yellow cab sedately cruising by. 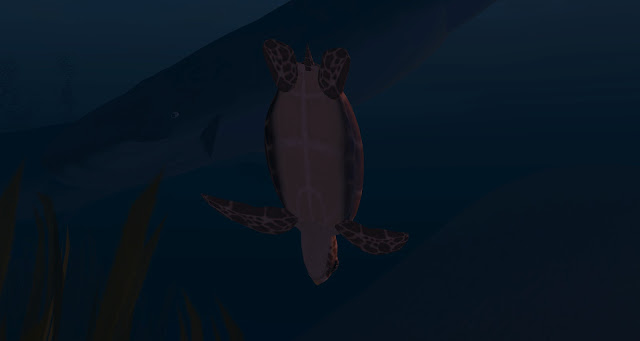 I love to stand on the sea platforms on Whimsy Kaboom and listen to Hawaiian music while I watch the whales.

I took these photos today. 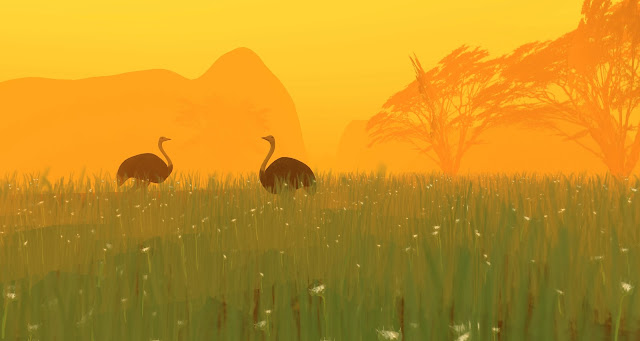 Here are some photos from Artiste Pointe's new Africa sim.

After several years without an update, Mystical Cookie has sent owners of her Mystitool gadget a new version.

The Mystitool, for those who might not be aware of it, is a multipurpose gadget that's like a Second Life Swiss army knife. See my reviews from 2007 here and here.

The Mystitool is way cool. I regularly use its radar, flight assist, platform rezzer, teleport history, face light, color calculator, and avatar location functions. I can scan Whimsy and see everyone on the sim and I can keep track of Sweetie when she is darting about. And when I fly, I make colorful little poofies.

The new version has lowered already low script time for the multiple scripts and contains more than 100 tweaks of existing features, all designed to make them faster, more powerful, and easier to use. A few features, most notably the URL catcher and anti-idle, have been removed, since viewers now have this functionality. Seldom-used  features are now plug-ins. There is one new function-- Mystitool owners now have the ability to recognize avatars with resource-hogging scripts.

Five-and-a-half years after buying a Mystitool for Sweetie (and one for myself), I still use mine daily. In fact, I feel naked without it.

An hour or so ago, while browsing the Second Life Marketplace, I saw for sale a playable pinball machine.

Now, that's something both Sweetie and I have been looking for for a long time, so I searched the creator and from his picks I teleported to his store.

I saw no displays, but the owner was AFK on the floor above me, so I sent him an IM asking if he would rez a copy for me.

While I was waiting I was looking around and spotted the pinball machine standing on the grass in the sim above the underwater store. I tried to teleport there, but the sim had damage enabled, and I was killed and teleported home.

I teleported back but the pinball didn't seem to be where I had spotted it. Nor could I get back to the store.

I assumed there was a locked-down parcel between me and the store, but then I got an IM from jrenslow saying if I kept it up he would report me.

I explained why I was there and what I wanted. No response. I realized I had been banned from his parcel and probably muted.

I rezzed my trusty and seldom-used alt Dakota and IMed jren and asked him what Chey had done to be banned. He accused me of lying and called me Mister Dance Island. He said I (meaning Mister Dance Island) had been harassing him for weeks and the next step he would take would be with the Lindens. Then he stopped responding, meaning, probably, Dakota had been banned and muted.

My friend Bonneville Nightfire has been horribly harassed in world by someone who somehow got his real-life identity, so if jrenslow is upset, it's understandable. But he is, however, clearly batshit crazy and needs to check himself into our robot sanatorium where he can get his poor overtired brain replaced with a nice mostly sane positronic one.

The incident made me curious about Mister Dance Island. Sounds like he and his army of alts are even more in need of help than Mr. bach. 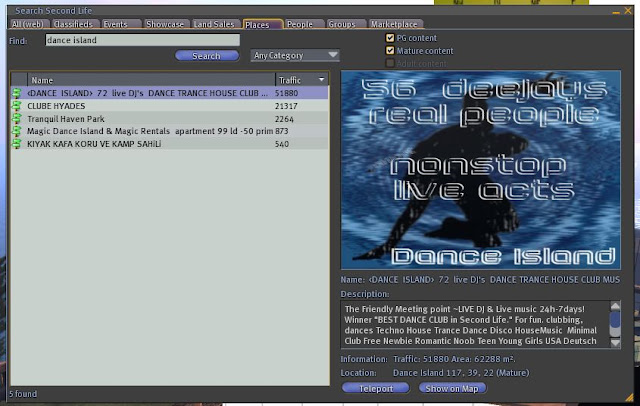 I can only imagine how jren ran afoul of Mr. Dance Island. It couldn't have been pretty. I have to say though, I do hope jren gets Mr. Dance Island off his back.
Posted by Cheyenne Palisades at 10:42 PM 3 comments