I've been meaning for a while to make a sign that tells how many times the little steam train at Whimsy has been ridden. Tonight I did it. It took about an hour.

Using Google images, I found an icon of a steam locomotive and, with the free program GIMP created a sign that read "...Train Rides Since April, 2006." Whimsy was born in April, 2006.

I used the free XY Text scripts as the counter. One script transformed a cube into an almost-flat prim that can display six numbers, then deleted itself. A second script sends text to a third script, which changes the visible message--in this case a number between 0 and 999,999 that displays against the image of the locomotive, like so: 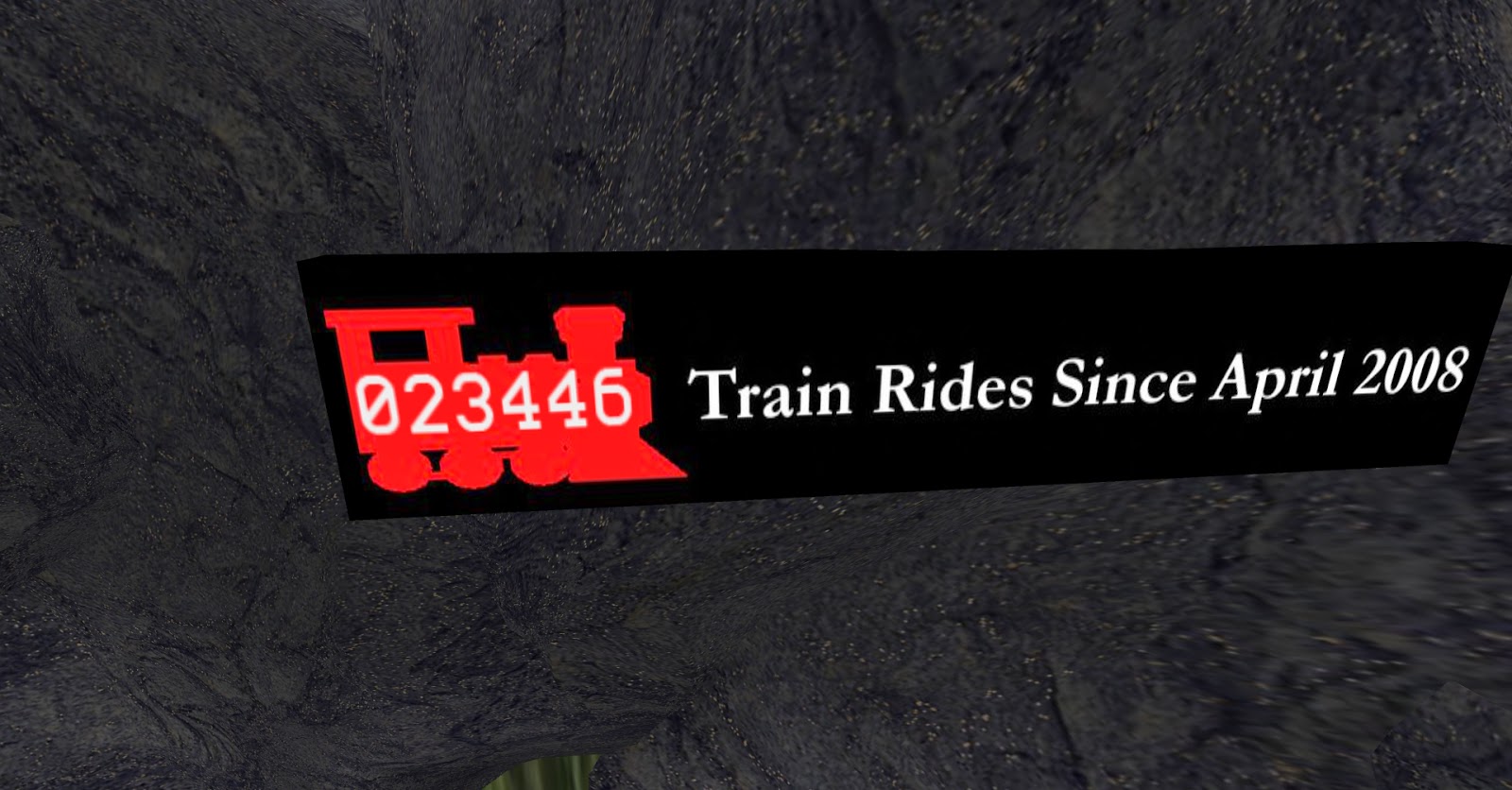 I'd used the scripts before in my altimeter, so it was easy to modify them for use as a counter.

Because Kitto Flora's train is now phantom, I was unable to use a collision event, so I recycled the same scanner I used earlier to trigger messages for train riders. A script checks every three seconds to see if  one of Kitto's engines is close by; if it detects an engine, it tells the sign to add one to the number of rides. I set the appropriate XY Text script to listen for and respond to the message, and all was well. Every time the train passes, the number increases by one. 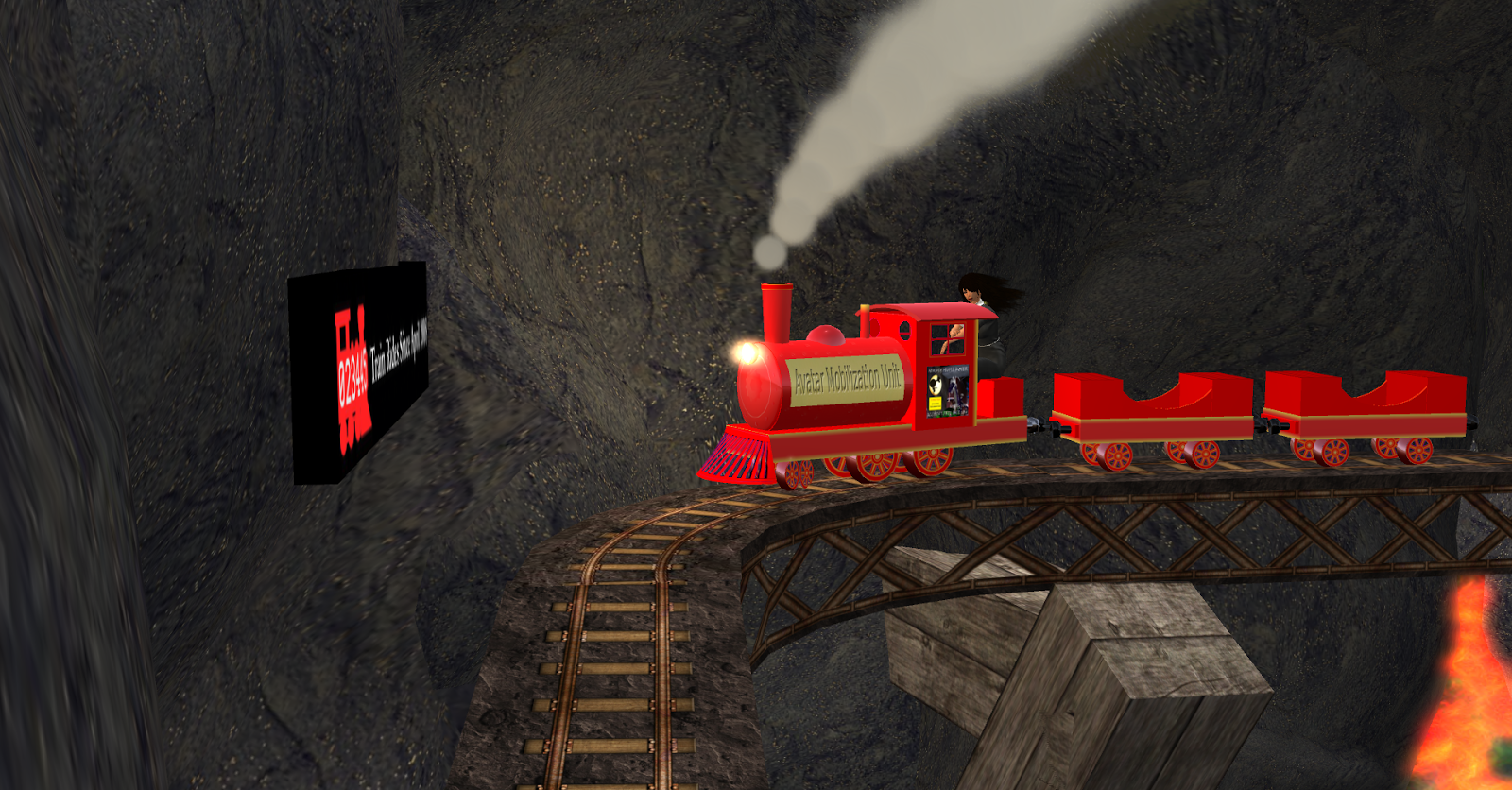 I've been saving messages from the train and did a tabulation, extrapolating back to 2006. I set the script to start with 23,400 rides. That's almost certainly an underestimate, but I'm certain it's reasonably close to the actual number of trips. For most trips, more than one avatar is riding (sometimes as many as five!), so the number of people served is more like 40,000 - 50,000. I might in the near future revise the script to count avatars rather than respond to the engine, but for now I'm satisfied. 23,446 rides it is! 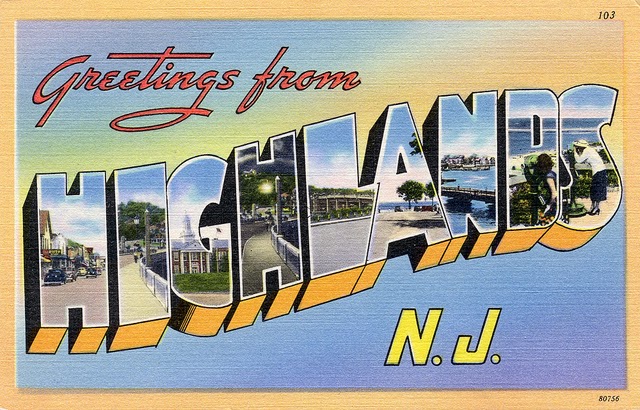 I'm happy to say the offer Sweetie and I made on a house in the highlands of New Jersey was accepted today. The high taxes and high sale price scare the shit out of us, but at long last the relationship that began when, in 2006, I saw an avatar building a fountain on a hillside, has reached its logical conclusion. When the NJ house closes, my cute little lake house in Atlanta will go on the market. Some time before the end of the year we will be married in New York or New Jersey, since both states will recognize our marriage.

If anyone reading this is yearning to become a snow bird, I have a great cottage in a quirky little community. It's (literally) feet from the beach at the lake, yet only ten miles from downtown Atlanta. It rarely snows, and when it does it's almost always gone within five minutes, and summers are surprisingly moderate. Lows during the hot months range from 68 to 72 F and this year the hottest it got in my little community was 91 degrees.  When the weather gets hotter than that, it's because the entire eastern seaboard is having a heat wave. It's not uncommon for our highs to be lower than those in New York, which is 800 miles to the north.

You might be surprised to discover how little I'll be asking for my delightful little house. 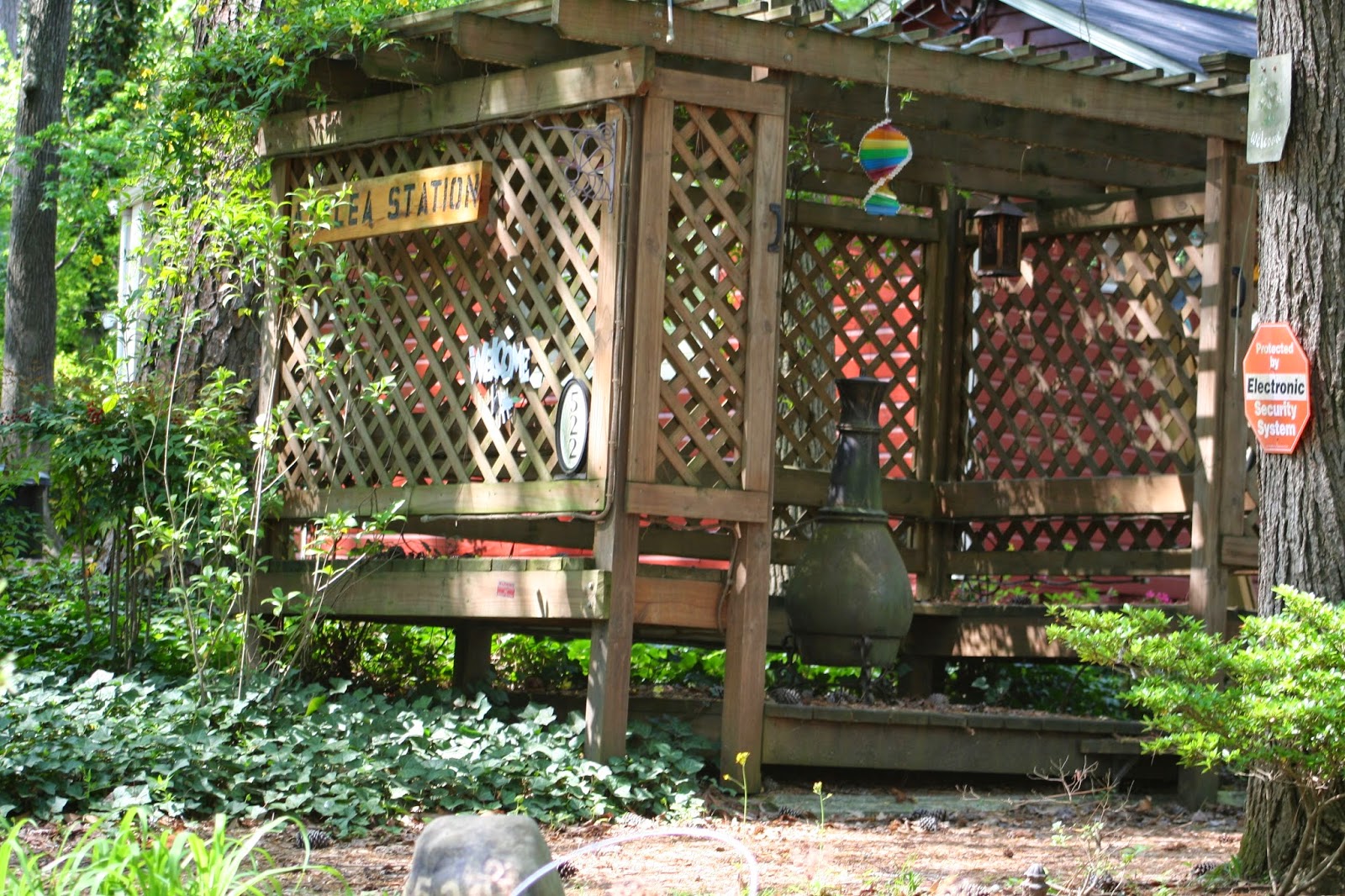 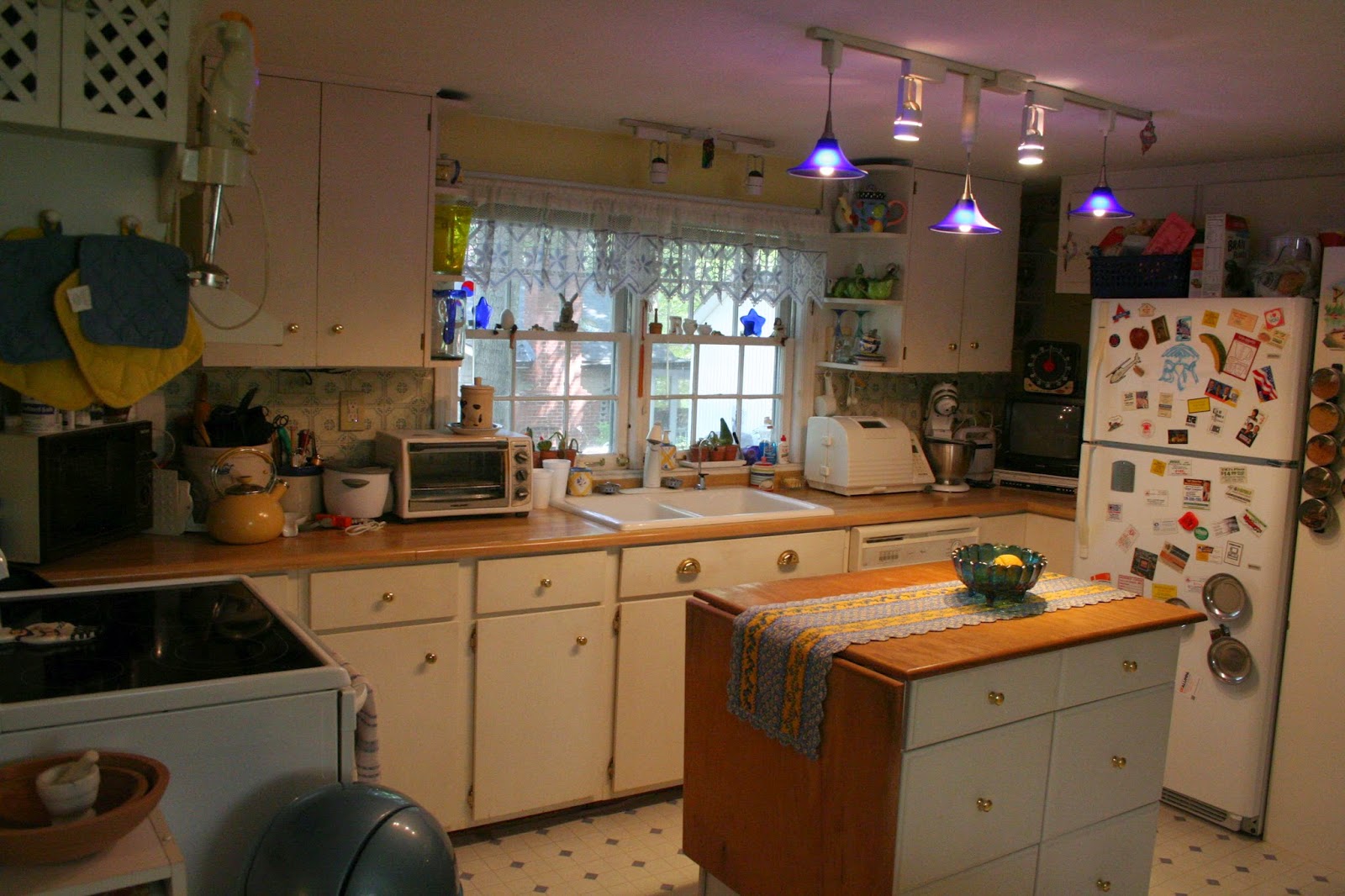 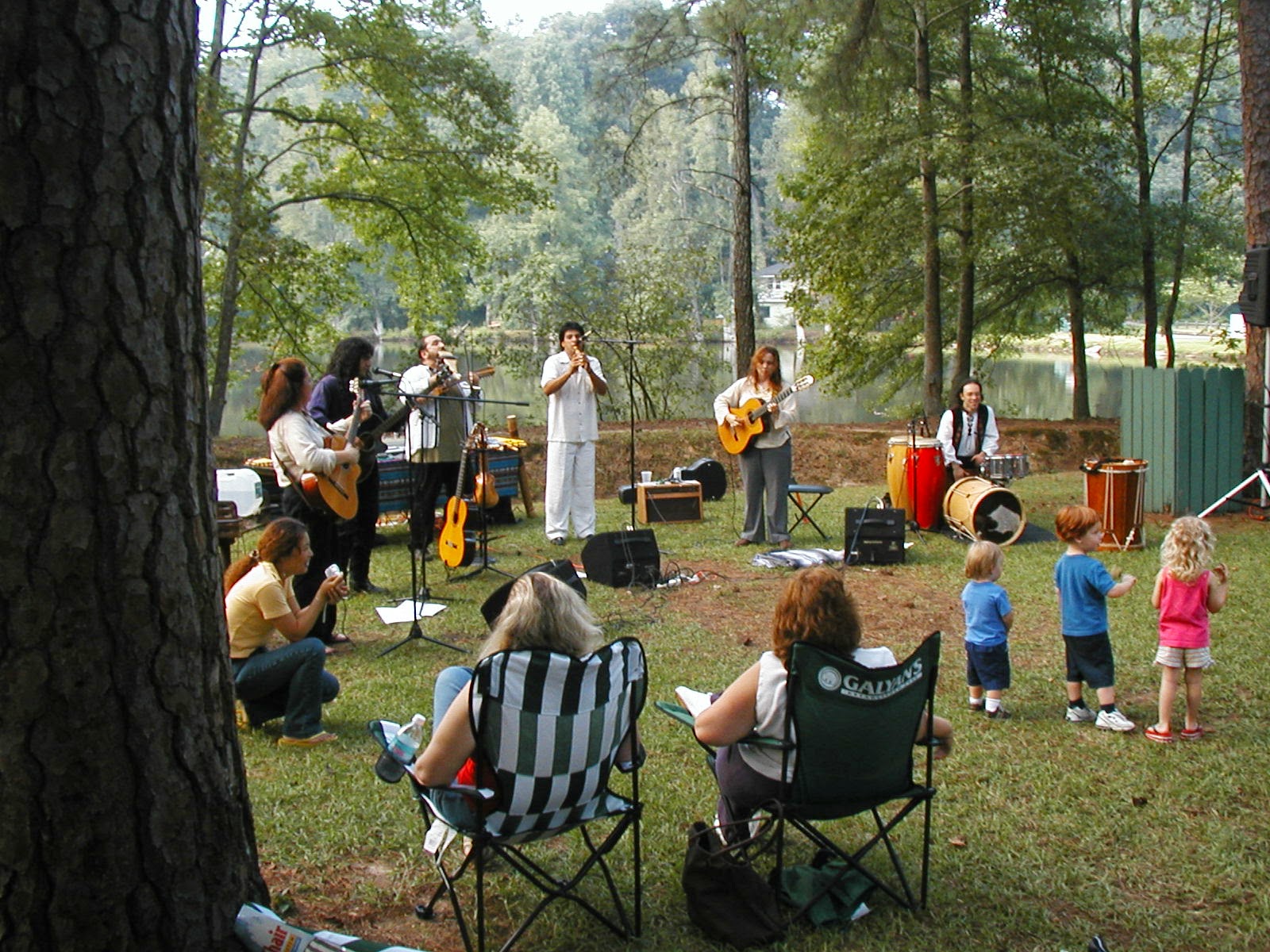 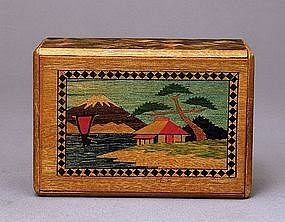 A long time ago my brother gave me a puzzle box he had picked up during his time in the U.S. Navy.

I loved that box. It was showing some wear when, in the early 2000s, a burglar broke it. Bastard.

The other day Sweetie came home with a puzzle box from Capalini Creations. 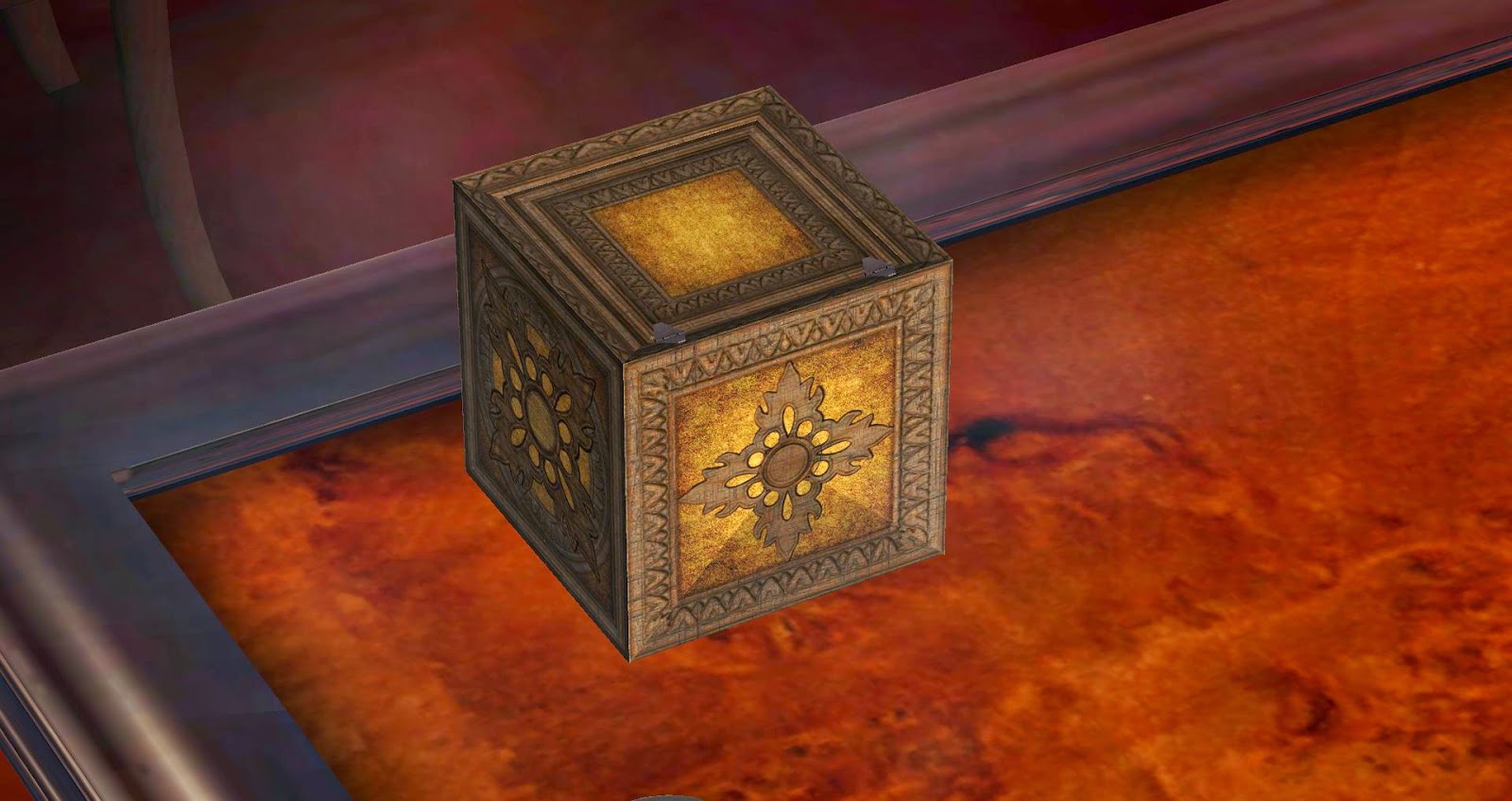 Like the box my brother gave me, the Capalini box requires multiple steps to open. Above, the box is closed. Below, it is six or seven steps toward being opened. 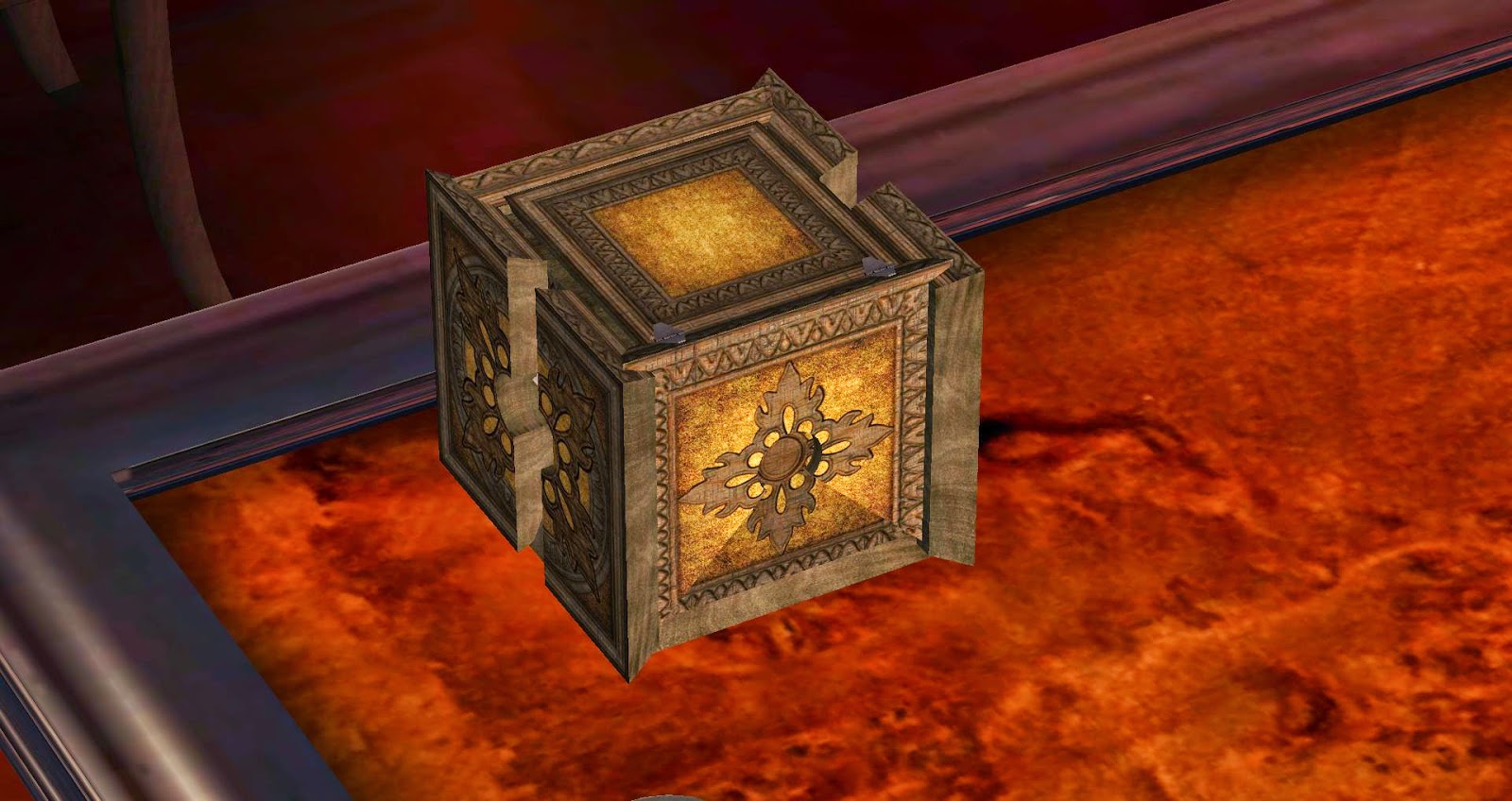 After rezzing the box at our PG Den of Iniquity, Sweetie logged off, leaving it to me to figure out how to open the box.

Instead, I decided to play the Crossword game-- but I kept hearing spooky noises. It sounded rather like Gollum and Smeagol arguing in loud whispers:


I kept looking around to see what was making the periodic sounds, but was unable to find a likely suspect. Until-- unless-- could it be the box!

Yes, it was Sweetie's puzzle box! 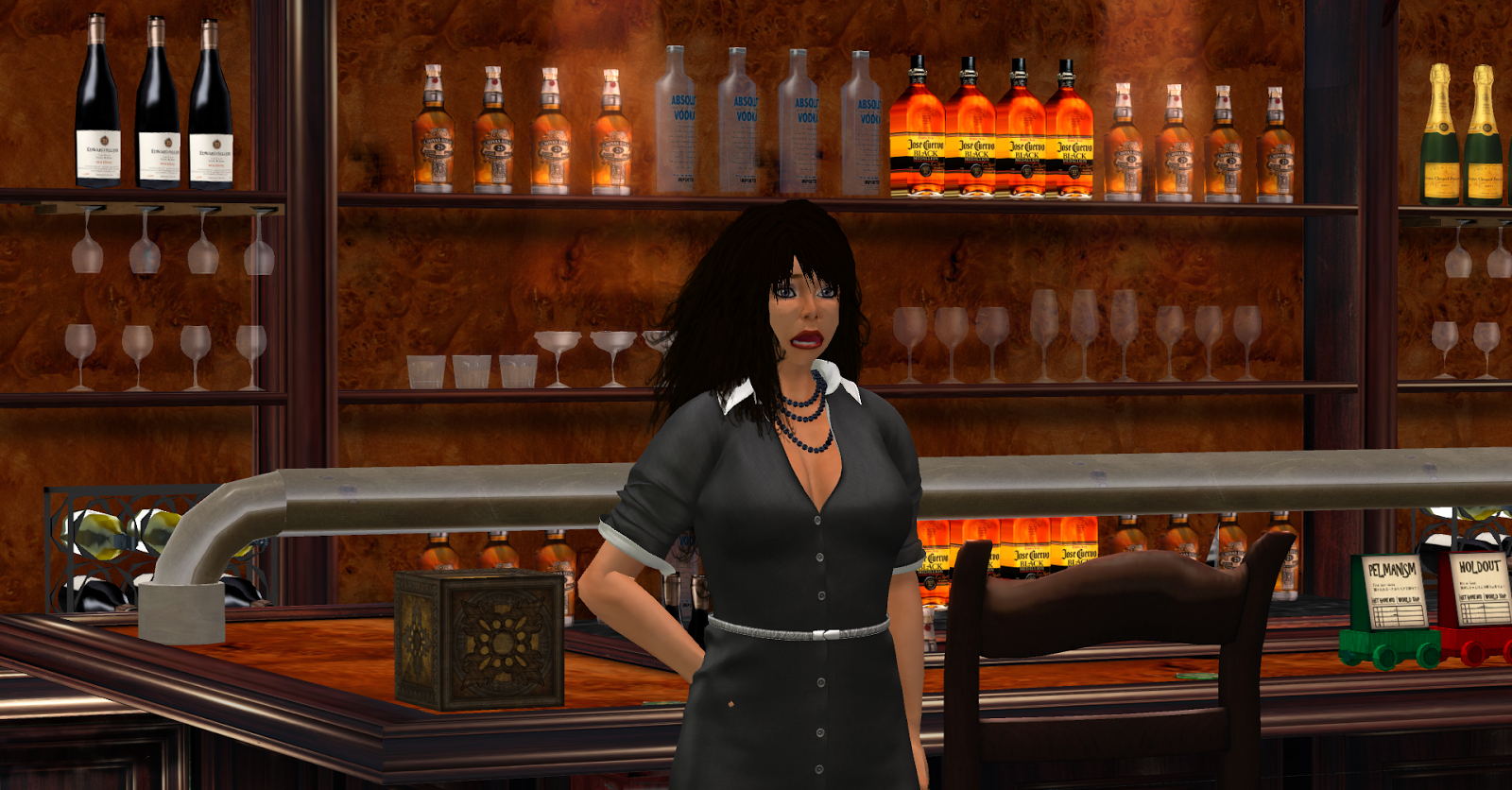 Posted by Cheyenne Palisades at 8:51 AM 0 comments 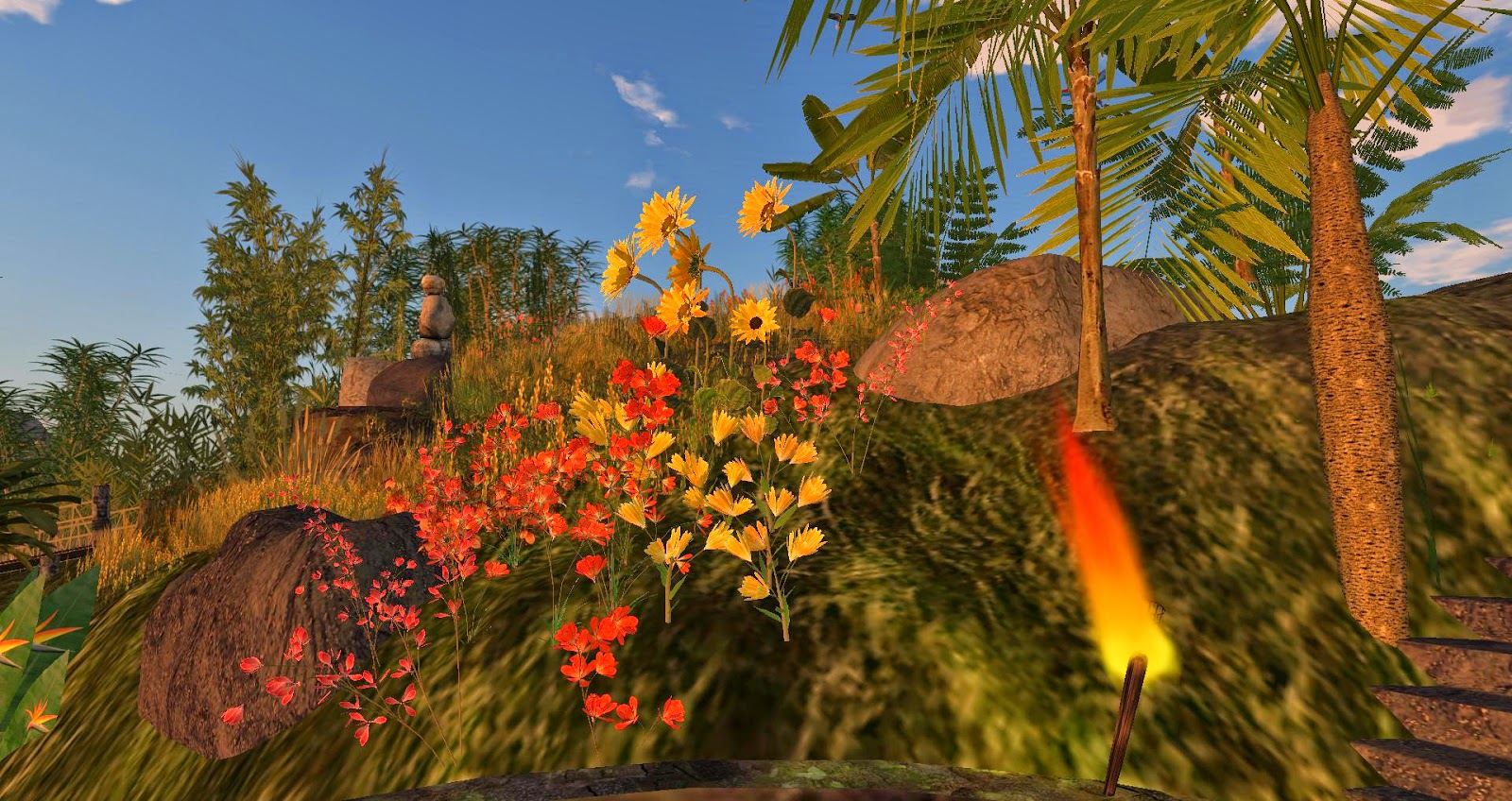 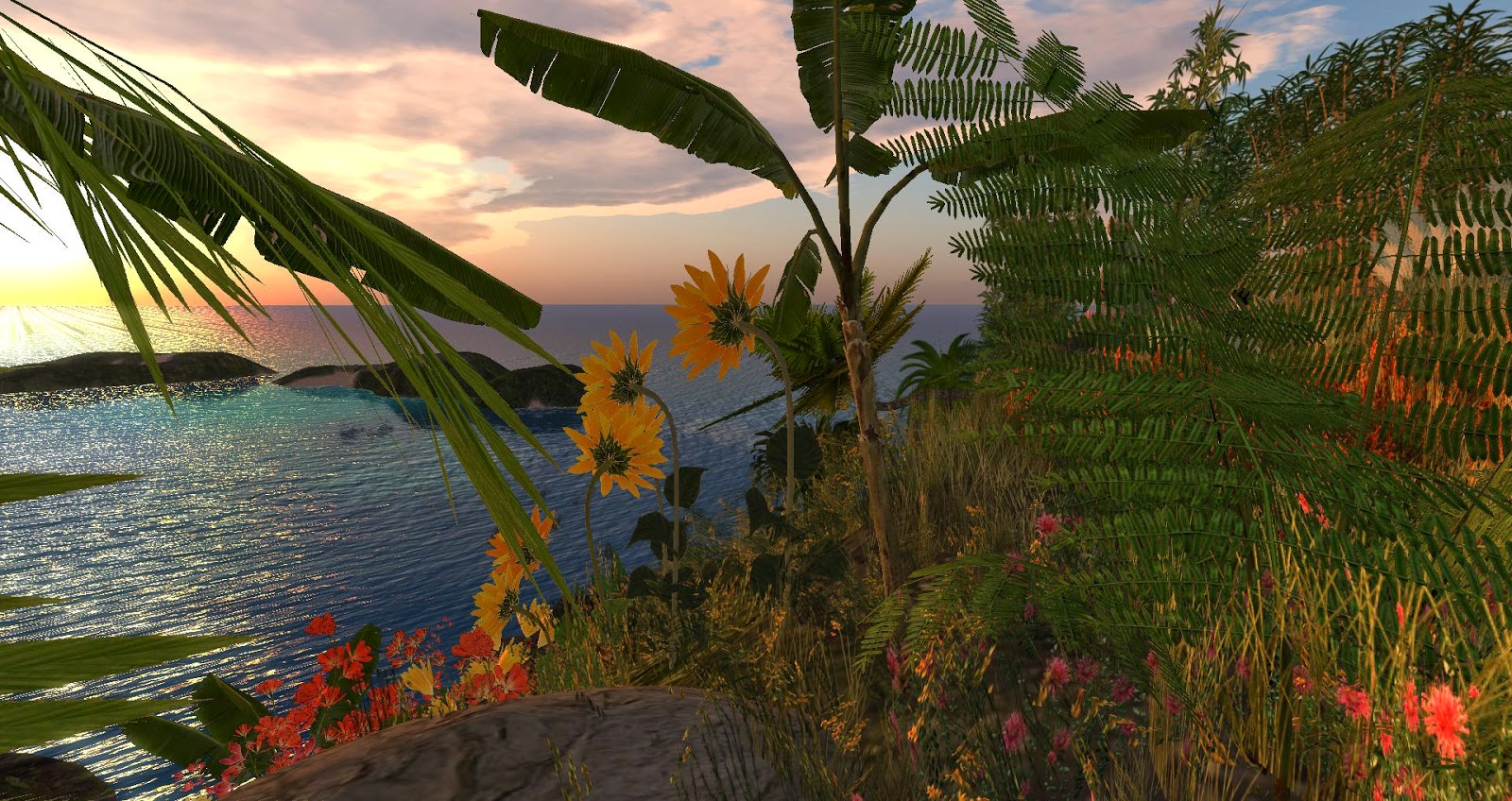 Sweetie continues her mission to bring mesh flower beauty to the grid.

Above, sunflowers, yellow and orange flowers, and a couple of mesh palms improve the upper gardens on Whimsy. 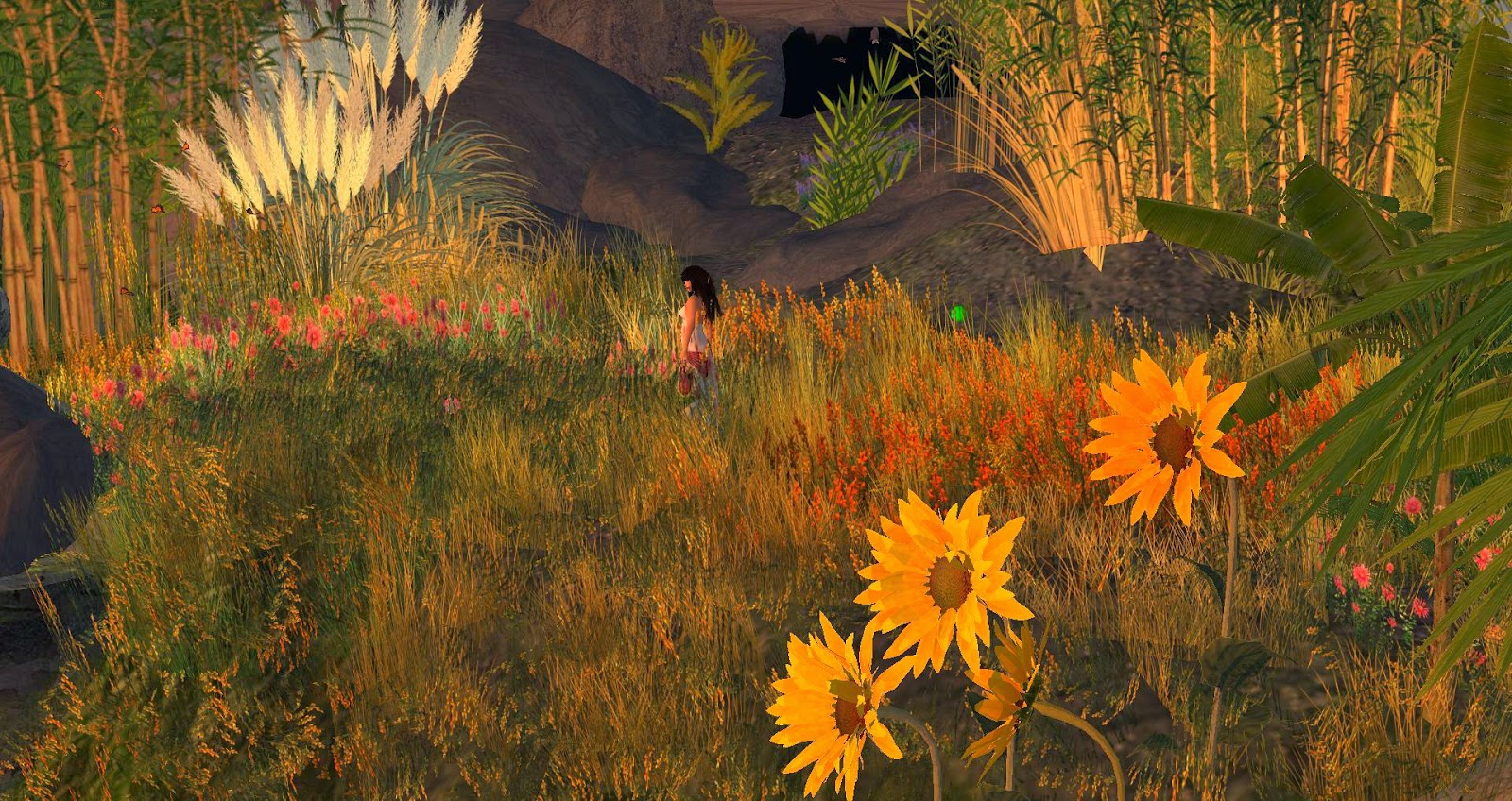 This stone figure isn't mesh, but adds drama to the landscape. Readers of this blog will already know Sweetie is all about drama. 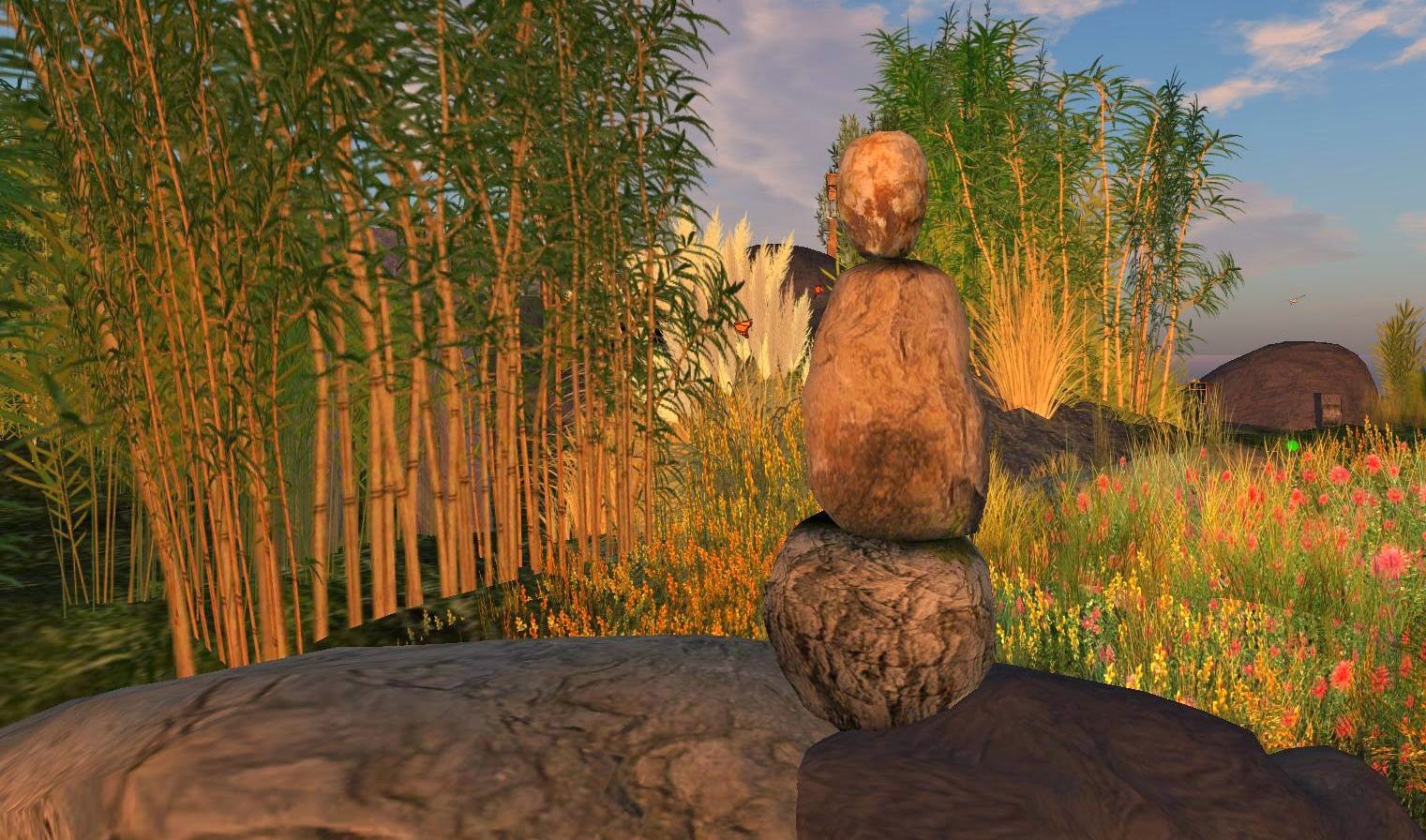 Posted by Cheyenne Palisades at 8:22 AM 0 comments 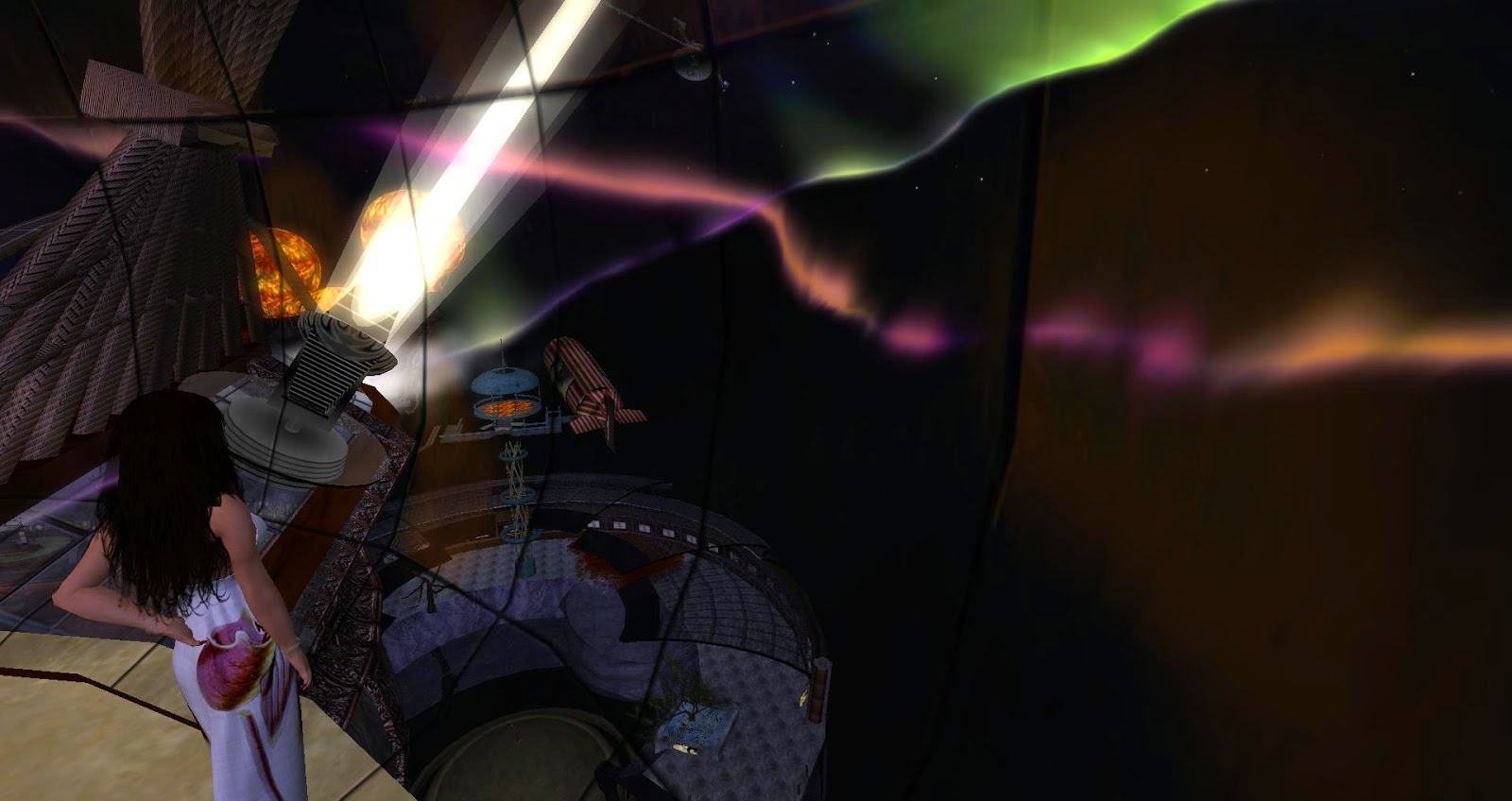 Sweetie and I were struck tonight with just how lovely the auroras are at 4000 meters.

Even when the photos are clicked to enlarge them, they don't do the auoraras justice. 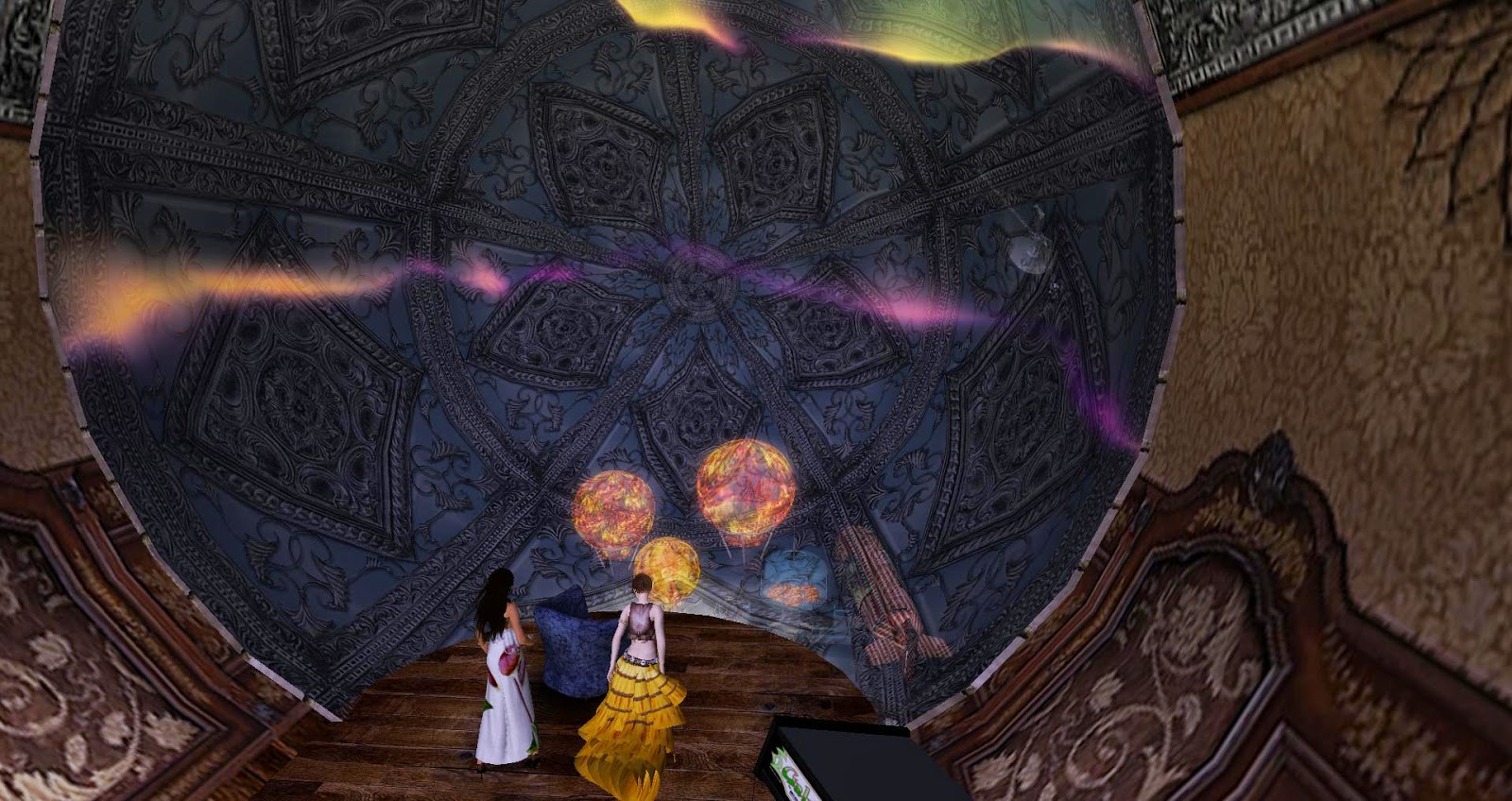 Posted by Cheyenne Palisades at 2:23 AM 0 comments

Yesterday Sweetie came back from shopping at Capalini Designs.

"What's that behind your back?" I said.

"Now show me both of your hands at the same time."

That one perplexed her.

"Sweetie," I said, "you might have gotten away with it if you hadn't dragged the copy so large."

Sweetie, it seems, had come home with a black metal fan on a rotating brass gimbal.

There are now four of them creating a sense of drama at our sub-orbital asteroid retreat. Teleport here to see them.

The auroras are visible only during Whimsy's night cycle. 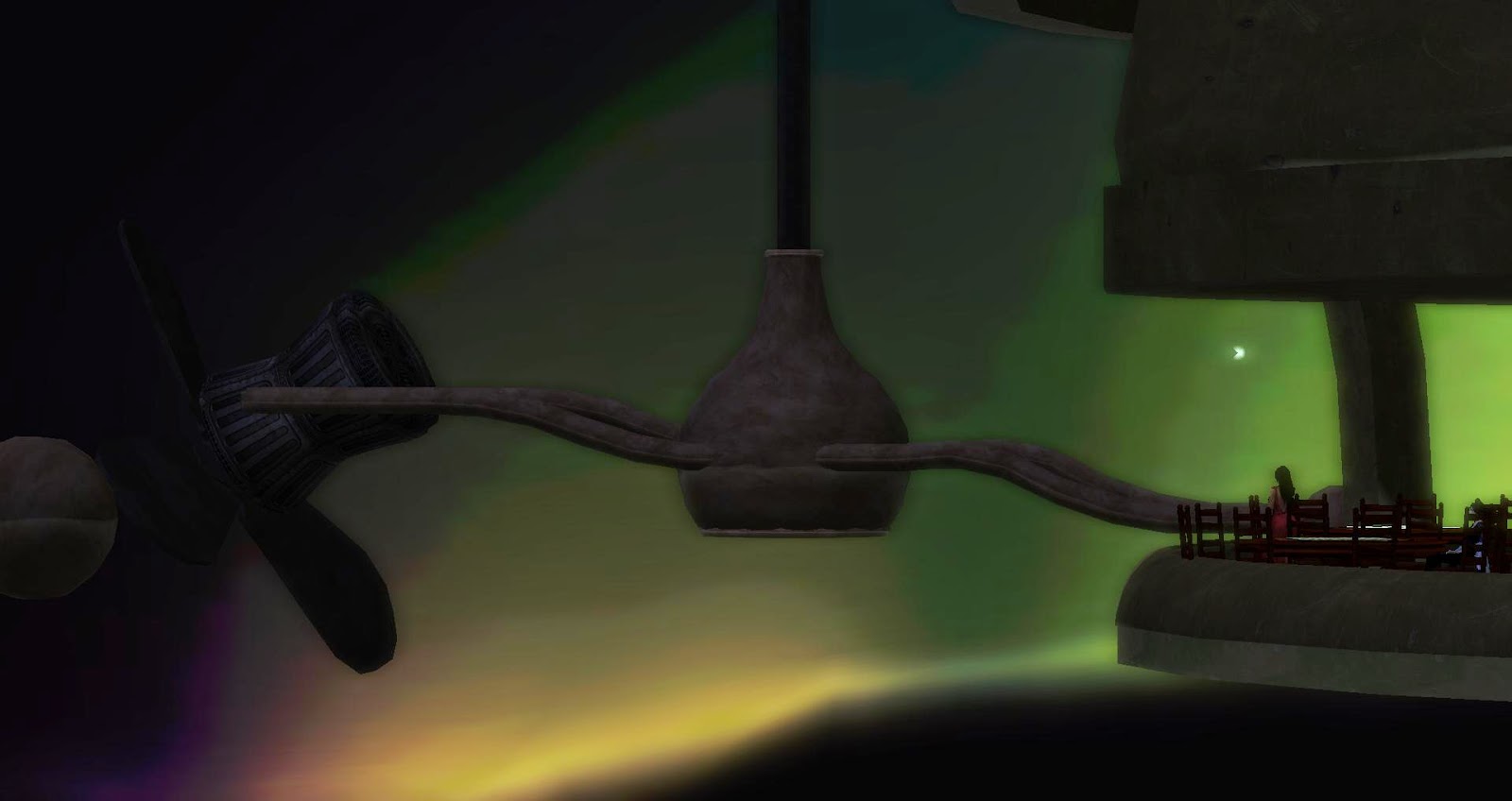 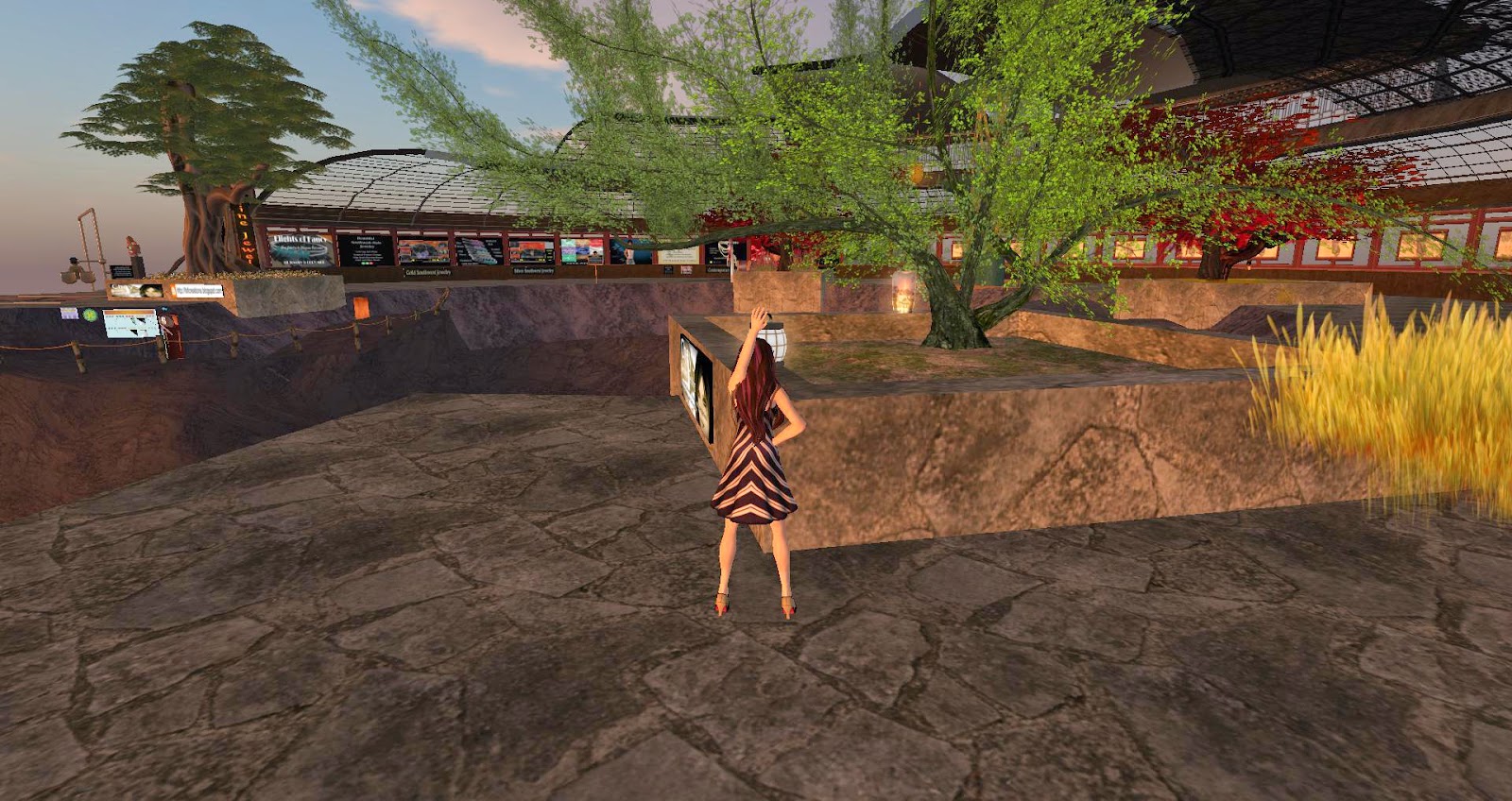 If you click on the photo to enlarge, you'll see Sweetie seems to be holding a lantern. It' s a trick of perspective. The lantern is sitting on the wall. Sweetie's arm is up because she is tweaking a tree she just installed at our suborbital asteroid retreat. 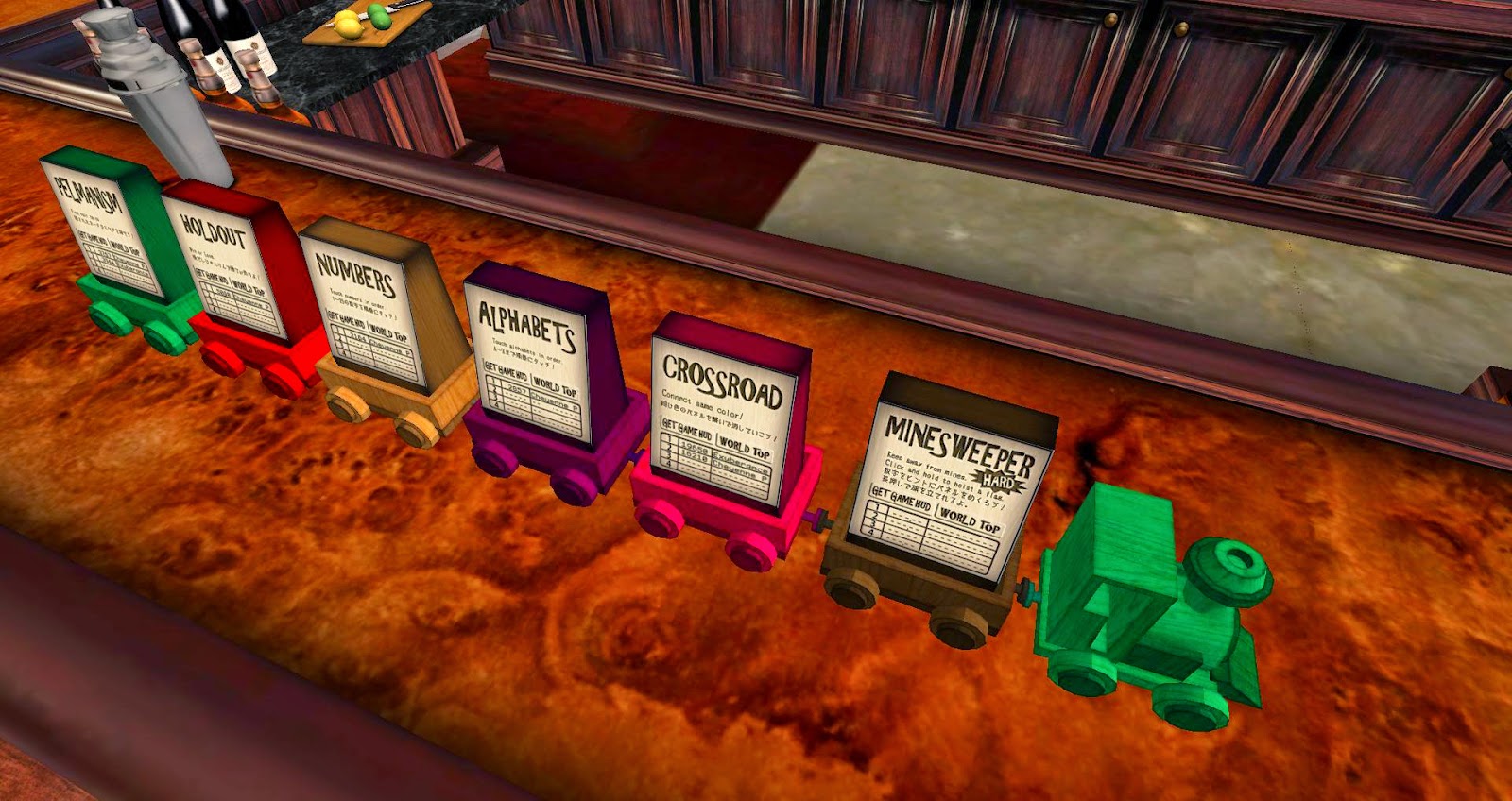 A month or so ago Sweetie and I went on a hunt for more games for our PG Den of Iniquity.

We found several we liked and tracked them down. Two creators were kind enough to give me copies, We found the store that sold the game Crossroad, which I liked a lot. Crossroad is a sort of match/connect the lines game.

The name of the store is Lizail, and they sell, among other things, fabulous wall (and one floor!) aquaria. 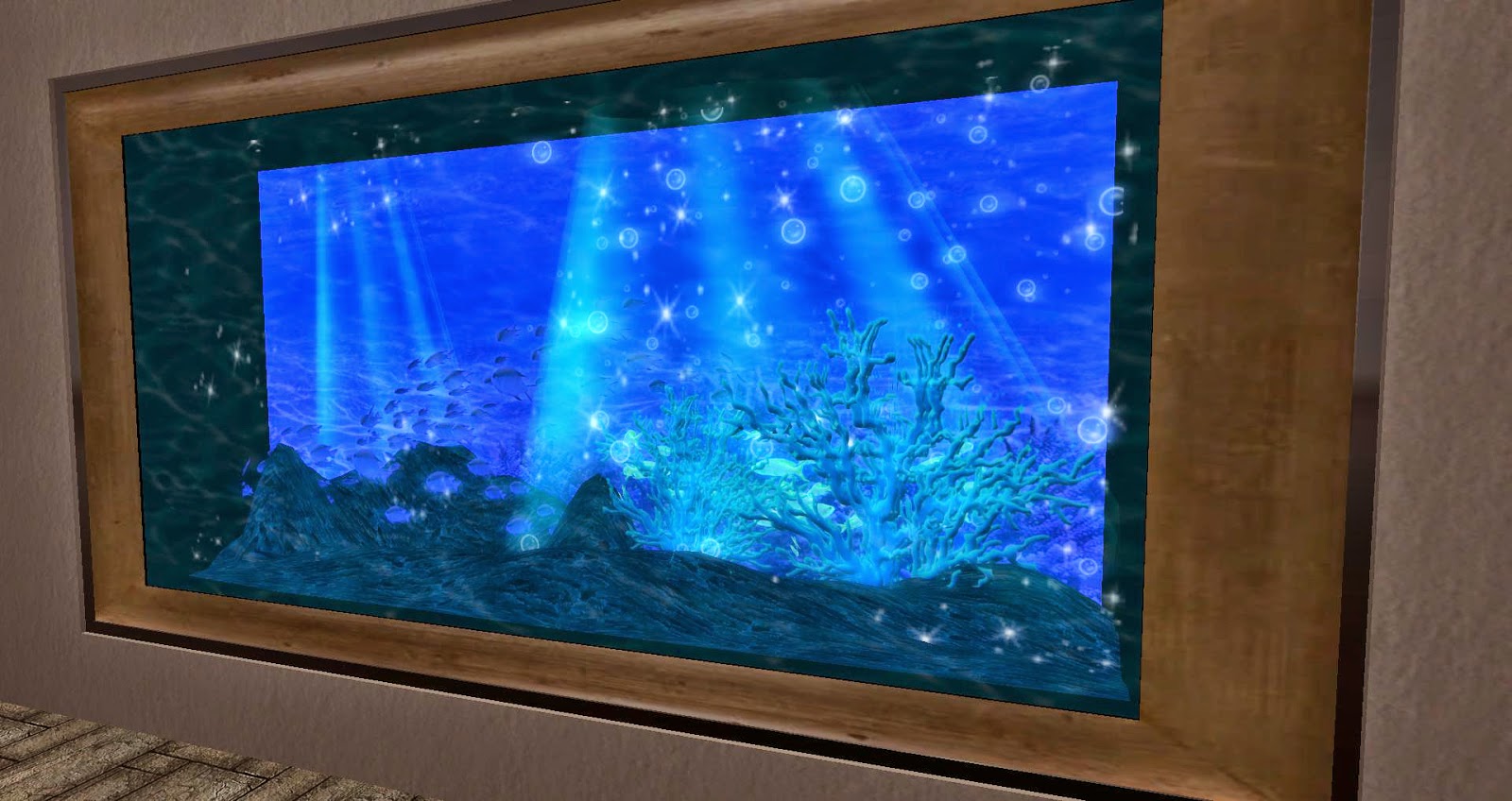 And games! Did I mention games?

Working on the Path to Pele 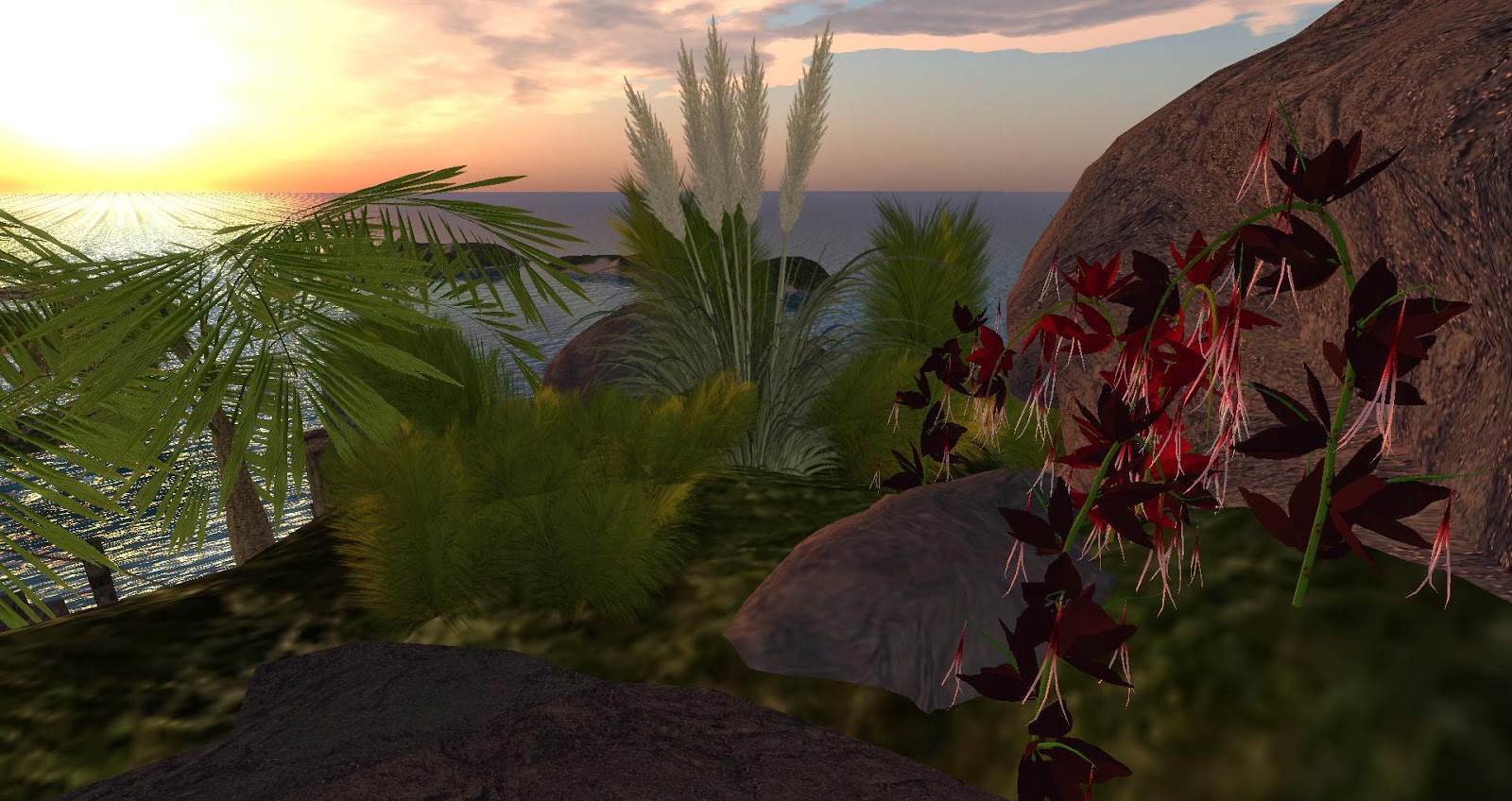 Sweetie and I have been tweaking the path that winds from Whimsy's entry to the volcano Pele.

We removed the Botanical sakura cherry tree that has bee in the above spot for years and she added these mesh plants...

... and this lava boulder, which helps define the path. 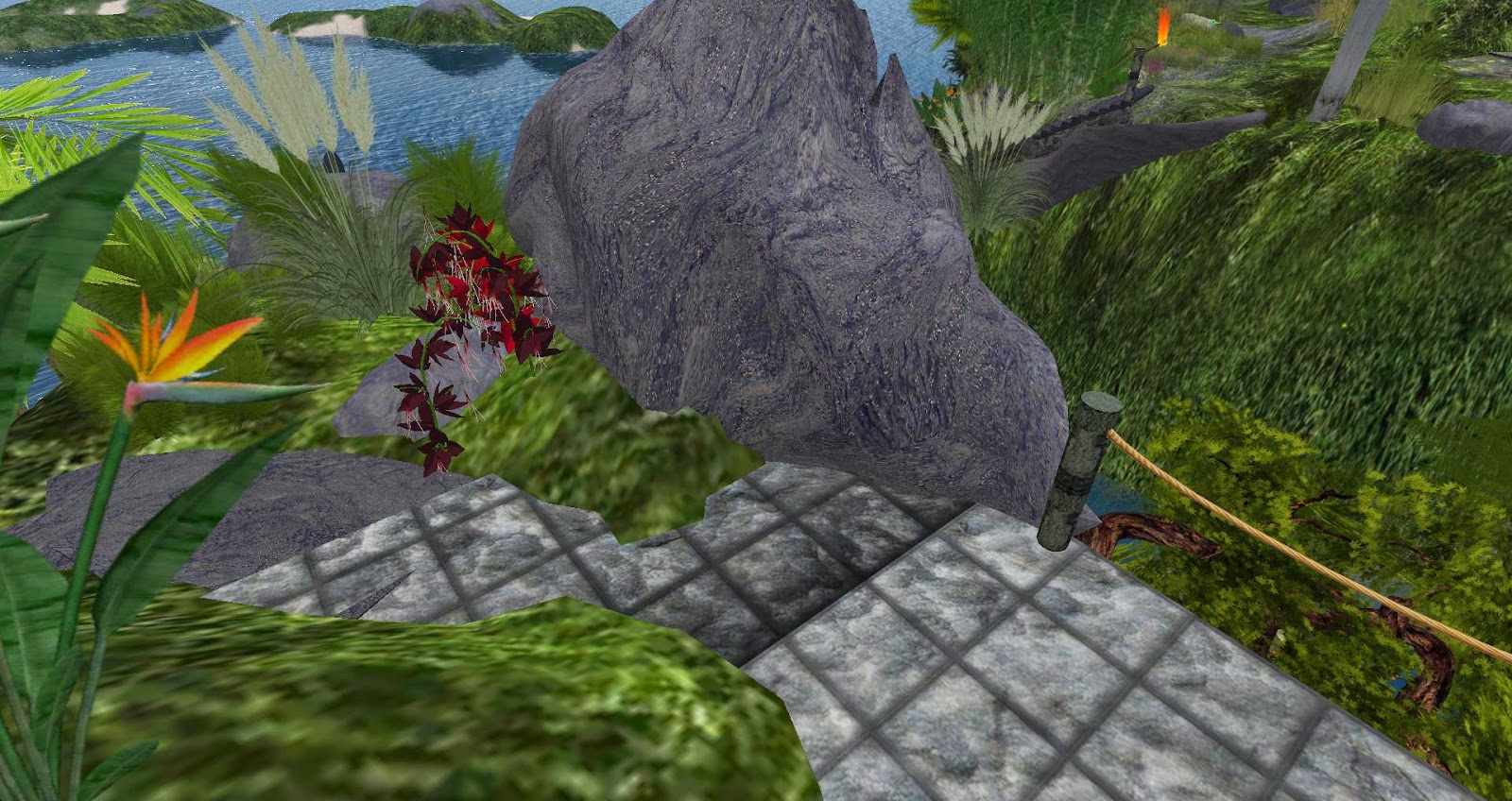 That gave me an idea.

This acute bend in the path was always awkward, but it added length to the path to the summit, which was desirable.

We Are Beta Testers for Second Life Experience Keys

Linden Lab has selected us as second round beta testers for Experience Keys.

Experience keys allow avatars to grant global permissions to an experience. This makes inter-sim teleportation possible, allows temporary attachment of HUDS and things like backpacks and weapons, and allows interaction without an avatar having to sit. At our robot sanatorium we could, for instance, cause an avatar to slip and slide when he or she steps in the pool of oil spilled on the main floor. Until how we have had to rely on blue menus-- which rather detracts from the experience.

Sweetie and I have been staying up night thinking of ways to use the experience keys.

Posted by Cheyenne Palisades at 2:09 AM 0 comments 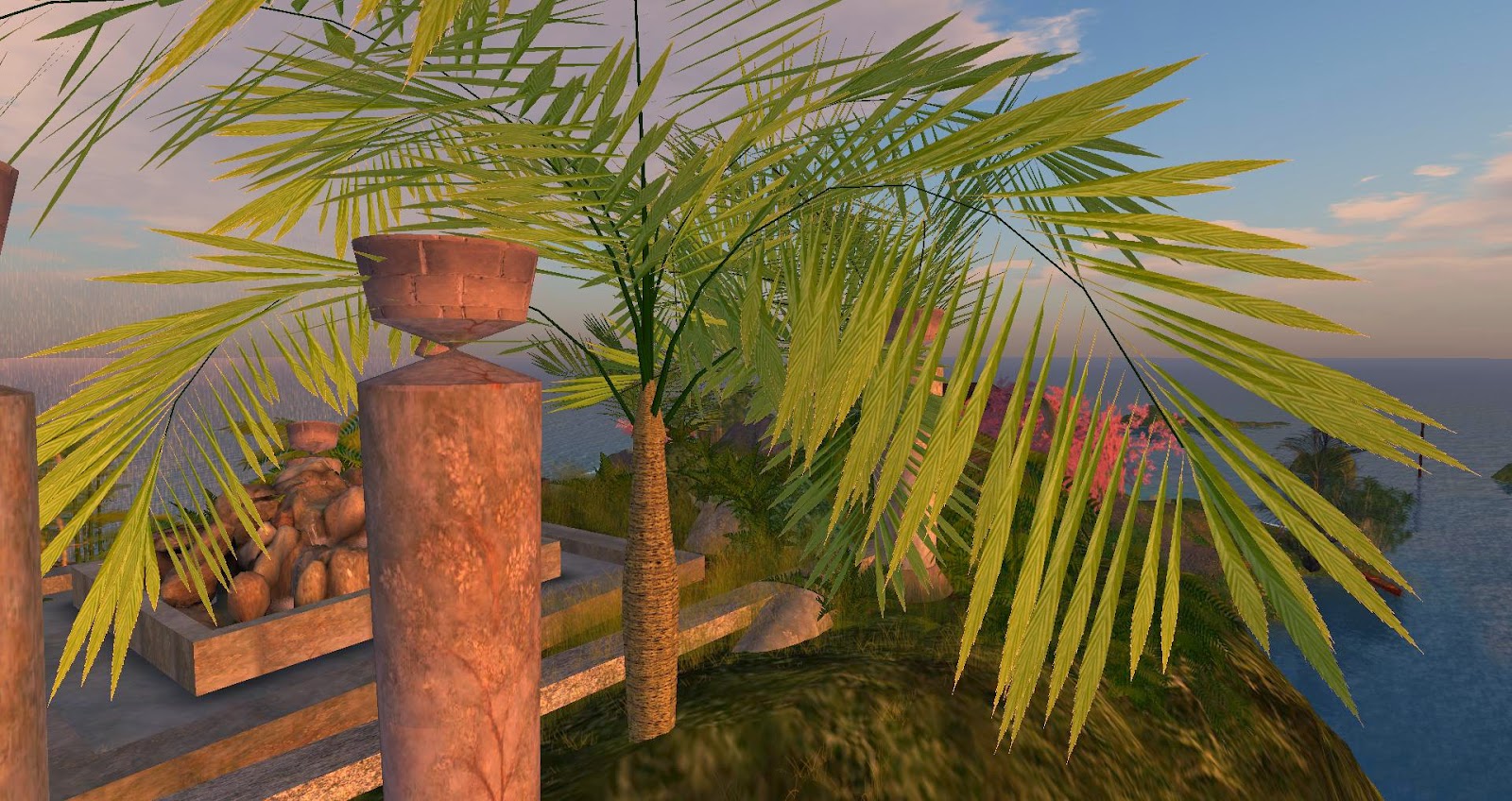 Sweetie is thrilled with the plants at Hayabusa Design. They're mesh, offer incredible detail at a low prim count, and many of them sway realistically in the Second Life wind. Better, they're copyable and modifiable, so she can have her way with them. She has stocked up on flowers, shrubs, and trees, changed the arcane names of many of them into something she can recognize, and has been slowly placing them on the land.

We've removed some three-prim flat plane plants, but we're keeping many, as well.

Here's how Whimsy is looking these days.