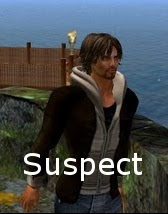 You know that annoying Calling Cards folder in your inventory? Well, Sweetie has one called Fingerprints. It's huge, pushing her inventory to more than 800,000 items, but there was no match. Nor was there one in the FBI's IAFIS.

"There's just one more place to look," she said. "That's the Torley-Ravenelle FLICKR files. Those are massive. DOWNLOADING... Nope, not there, either. Our UNSUB's prints aren't on file anywhere."

"No, no, his name's not AlexHeyThere JuneauAlaska; it's AlexHatPin Jambalaya," said Sweetie. "And no, it's not Alex. He's not the one."

"Drat!" I said."I'm still leaving him in my Suspects folder. Just in case."

"Don't put him in your suspects folder, Cheyenne," said Sweetie.

"Why not? Why isn't AlexHeyabusa JumpingJackFlash a suspect? He's suspicious."

"Exactly!" she said. "TOO suspicious. Therefore he isn't suspicious at all."

"I can sense it with my deeply ingrained espionage training," she said. "Alex is a spy. I'm just trying to figure out if he's the single, double, or triple latte type of spy."

"The sort of spy who is charming, suave, slick with a quick answer. He does Romeo assignments, primarily. He stays up too late too many nights, so he has to consume triple lattes all the time to stay awake while working his 'I'm obviously so not  a spy' cover."

Sweetie ignored me. "I suspect Alex instigated the hummingbird attack to make contact with us.He uses it as an excuse to comment on the blog. If you spoke better Italian you'd know he's talking in code to his handlers. His last message was a complex algorithm. The message was 'drink more milk' That's spy talk for 'Send more money or I'll have to switch to black coffee.' So you can drop him from your list. He's a known quantity-- although he might prove useful in the future.'"

"But who is he working for?" I asked.

"Hmm," Sweetie said. "Sometimes it gets so tangled up you don't really know who you're working for.  It could be anybody. Perhaps the Lindens. You ARE a known troublemaker, after all."

"Or he could be a hit man for the Goreans. They have reason to hate you."

"You did call it Those Motherfuckers From Gor," Sweetie said innocently.

"That I did," I said. "Considering how many people I've pissed off over the years, it could be anybody."

Sweetie smiled and preened for a moment, using the shiny edge of the blade of her ever-present katana. "So, back to the matter at hand.The person who left that fingerprint was most definitely not a professional."

"No," she said, thrusting her katana forward to emphasize her point. Sweetie is never subtle when making a point. "Because a pro wouldn't leave a print. This is the mark of a crazed amateur, I'm afraid."

"That's brilliant!" I said, backing away slowly-- because she DID have that katana in her hand. "An amateur! Ha! We'll have this wrapped up in no time!"

"No, she said. "The amateur part is easy. It's the crazed part that makes it difficult."

"You have that look of satisfaction on your face," I said. "There's something you're holding back."

"Yes," she said. "Remember I told you the lettering on the third postcard was written with slow-developing raspberry jam?"

"The second card was written with confectioner's glaze. And the first, the one with black ink? It wasn't black at all, just dark, dark brown. Because it was fine Belgian semi-sweet chocolate!"

She continued. "Next postcard, please bag the evidence so I can't get to it," I licked nearly all the writing off before I could analyze it. I am not responsible for my actions when sweets are present."

The mastermind behind Bob's abduction is taunting us," she said. "Taunting us!"

Posted by Cheyenne Palisades at 8:48 PM

Outrageous!..Penny, be a love and write up the following for me could you? And leave out any of my preamble and side comments this time...ready? right...

Miss Poultrysides,
It has come to my attention that in the latest instalment of the epic saga to recover Bob, you & the ever mysterious Sweepie have, either intentionally or unintentionally, cast an outrageous slur upon my good name and character.
I refer to the suggestion that I would drink a triple latte to keep myself awake. It is widely known on this side of the pond that any good englishman would make himself a fresh pot of tea and digest a chocolate hobnob to beat of the call of Morpheus. Or a snifter of port or brandy at a push.
I therefore ask that you post an immediate retraction to this extremely negative comment immediately and will leave it in your hands.

There! Send that immediately could you Penny? ...my, that felt good. Think I'll take a trip down to Buck House and watch the changing of the guard. Actually, old thing, could you check if the restraining order's been lifted yet?....You're not still typing ar....

Alex, thanks for being such a good sport about this.

Ms. Moneypenny is taking your dictation? Now we know you're with MI-6.

Clearly, being English, you're not drinking triple latte. We're so sorry for the slur in our blog!

Although I'm not so sure you're drinking tea. More likely you're at the pub downing stout!

Almost, but not quite..nowt like a lovely pint of Guinness over breakfast to get you started in the mornings... :)

As for my small part in the Bobnapped saga....fantastic! Best laugh I've had in ages!!I mean...AlexHeyabusa JumpingJackFlash...sheer genius. Now I'll have to download Viewer 2.whatever and play with the display names...

Although I am a tad disappointed I'm not the bad guy..I suspect I've been rumbled....

(Sweetie paces about muttering darkly to herself....)

WAs it a slip, an innocent guesture of homage to a favorite treat, or a coded message to his true backers that alex had made? A spy certainly but an agent of the doughnut grid?! I never would have imagined they would be so bold as to try to infiltrate whimsy itself.

I must warn Cheyenne , And get the guest room ready ...

Alex, RE your mention of the word donut...

I'm afraid you came to this blog after our great misadventure with the shadow donut government. The mere mention of that hallowed pastry sends Sweetie into paroxysms-- and I'm affected, too. Now I must reassess your innocence. I'm afraid you're back on the suspects list.