Posted by Cheyenne Palisades at 2:23 AM 0 comments

I have quite a few outfits from a store called Kungler's. I did a search and jumped there-- I thought.

Wait a minute! Kungler's is-- or at least was-- a clothing store. Now it seemed to sell only jewelry. And nice jewelry, at that. I bought a couple of pieces.

Back at home, I realized the names of the stores were subtly different: Kungler's (clothing) vs Kunglers (jewelry) I inspected an old Kungler's outfit and then a necklace. Onyx Leshelle sold the Kungler's clothing. If that name is familiar, it's because Onyx is the main force behind Maitreya.

The Kunglers (no apostrophe) line of jewelry is made by AvaGardner Kungler. Different person. Mystery solved.

My new jewelry makes use of materials and looks great.

The store looks great, too.You can find it here. 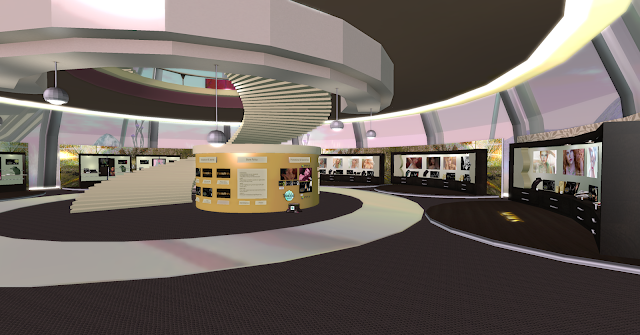 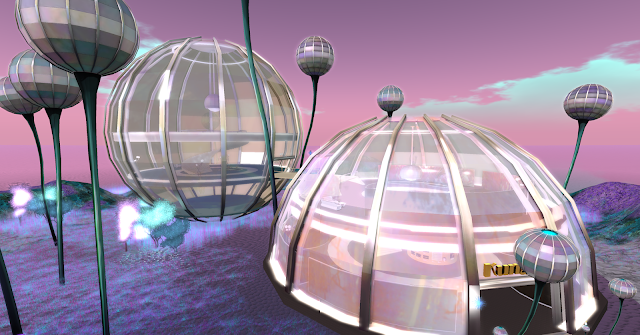 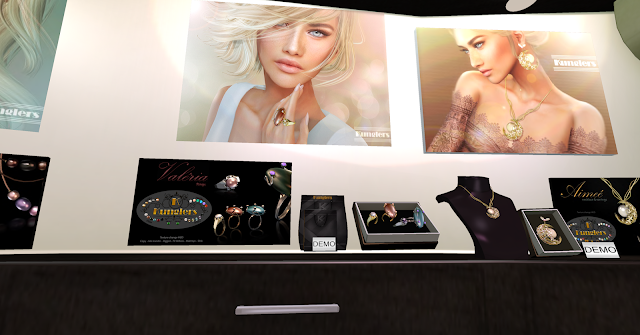 Posted by Cheyenne Palisades at 5:17 AM 1 comments

The House at the Old Firestorm Gateway 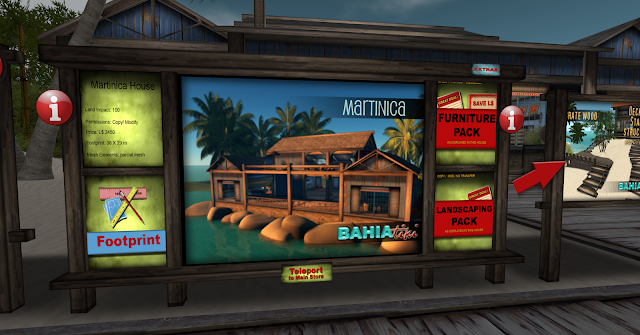 I'm glad I went back to the old build of Firestorm Social Island. Why? Because I not only took lots of great photos to share, I snagged the creator and name of the big blue house.

It's the Martinica, from Bahia Tiki. The FS folks made some modifications, taking out the front and rear doors and partitions between the rooms, adding a rear entry, and removing the fireplace and chimney, but otherwise it's the same house. It sells for $2450L.

Sweetie likes it, and so do I, and there's a chance we'll buy it for our own use. I'm unsure whether it will go on the ground or in the sky; if the latter, we'll need to find a nice  tropical landscape upon which to place it.

Here (below the fold) are a few photos of the house as it will look when purchased. Click on the images to view them in all their glory.

Working as a Volunteer for Firestorm: V. Last of the Photos of the Old FS Gateway 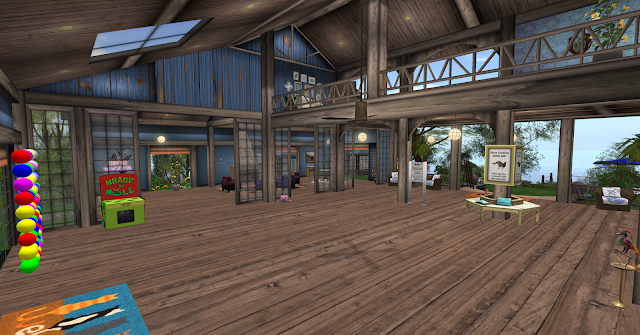 There are the last of my photos of the old Firestorm Social Island. Feel free to download and share them. Click on them for the best view.

Working as a Volunteer for Firestorm: IV. Still More Photos of the Old FS Gateway 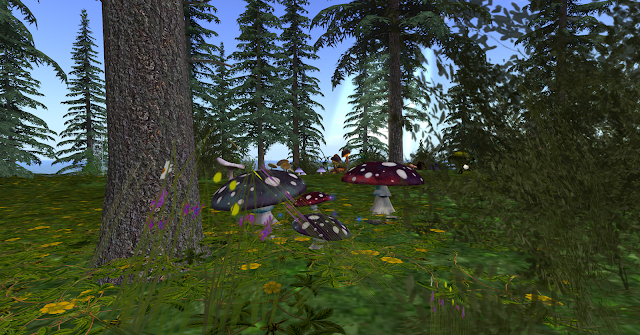 Working as a Volunteer for Firestorm: III. More Photos of the Old FS Gateway 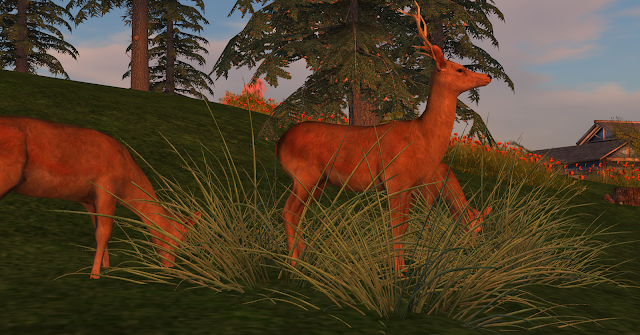 Working as a Volunteer for Firestorm: I. How It Happened

The Firestorm viewer is insanely popular in Second Life. It offers rock stable performance and a host of handy features missing from Linden Lab's official Second Life viewer. I and most of my friends use Firestorm.

The Firestorm team operates a block of island regions. The team holds its meetings there, but the purpose of the grids is to provide welcoming space for new residents. Volunteers greet new folks by name, answer questions, provide suggestions, and direct them to locations on and off the Firestorm islands. The intent is to encourage retention-- to provide a service that results in a larger percentage of new folks remaining in Second Life.

I found the old welcome areas like Olive, Plum, Hanja, Murray, and Governor Linden's mansion anything but welcoming. Older residents hung out there to socialize, and many came just to rag on or misdirect new folks. Some older residence, including myself, would visit to assist the new people, but we were distinctly in the minority.

A while back---I'm not sure just when, but certainly earlier than 2016, Linden Lab began cooperative ventures with Second Life organizations to shunt new accounts to them. Areas like New London and the Firestorm appeared, with content designed for new folks-- and the Lindens send new accounts to them upon their exit from Orientation Island.

I'm not sure if the Lindens provided regions for free or at reduced cost to these new ventures, but I suspect so and certainly hope so. Firestorm's seven regions at today's tier would cost about $2500 USD just for tier. That's a considerable expense! Bravo to Linden Lab if they're giving the welcome areas a financial break!

When, several months ago, I began spending more time in world, I took myself to some of the old welcome areas, and then to New London, and, finally, to Firestorm Social Island. After my absence many of my friends were gone. I had lost touch with many of those who remained. Even before my furlough from Second Life I had been spending almost all my time at Whimsy, building, scripting, tweaking. It was time to get out.

Purchase of my Maitreya Lara body provided some impetus for getting away from Whimsy. One reason for my low level of activity had to do with the Lindens breaking all my old school shoes. I was ambivalent about mesh bodies until Bakes on Mesh was announced. That proved a deal maker for me. Suddenly I was back in world and focused, for the first time in a long while, on something other than Whimsy.

It helped that Whimsy had been rolling along for some years with hardly a hiccup. It still looked and ran great, and every script I wrote back in 2009 was still running merrily along, doing whatever silly or absurd things I had designed it to do. So Whimsy would be fine while I looked into some avatar modification.

I liked Firestorm Social Island from the get-go. It was attractive, and there was a good mix of new and old folks. Best of all, no one hassled the newbies. When volunteers were absent, and sometimes when they were present, non-helpers, including myself, would chip in to assist.

Two important things happened from my visits. Well, make that three. First, I was having a good time. Second, I was making friends with some of the regulars. And three, Dorrie Bellman suggested I file an application to become an assistant. Dorrie is HR Manager for the Firestorm Gateway.

I thought about Dorrie's suggestion for a few days, and then filled out the form. After filling out a second form. two meetings with Dorrie in voice, and a two-hour group meeting to learn about procedures and tools, I became an assistant. A few weeks later I became a full-fledged assistant.

Helping others comes natural for me. That's what I did in real life, after all. I'm quite good at not letting others get me riled, which is handy when dealing with griefers or people who are just unpleasant, I'm good at banter, and I type 100 words per minute. Best of all, I know, from my long tenure in Second Life, the answer to many questions that routinely pop up, and when I don't know something, I generally know what to do to figure it out.

My time commitment is a very reasonable two hours a week. I wear the Firestorm Helper tag when going to the regions, check in via group chat when I arrive, and check out when I leave. I don't yet have the ability to rez objects or the HUD that will give me the ability to relocate people who refuse to follow Firestorm's fairly liberal rules. but that will happen in time.

Even a two hour weekly commitment is significant in Second Life, but I doubt it will be a problem for me. I can come and go as I please, just so long as I exceed two hours. That suits me just fine. I'm enjoying myself.

Next: II. Redesign of the Gateway 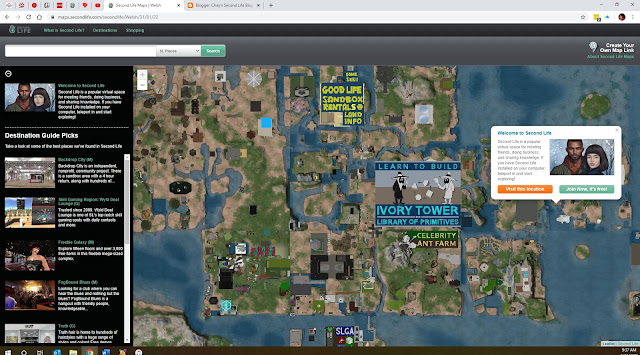 Quite a few regions in the older areas of the mainland display text or images on the world map. I'm not certain just how that happens.

Here's a snapshot of the map around Natoma, home of the ancient and well-known and awesome Ivory Tower of Prims. Check out the Mad Magazine Spy v. Spy cartoon on Natoma itself!

When Whimsy was new I put various textures on 256 x 256 meter prims and set them at various heights. I would wait a couple of days, and then pull up the map. None ever affected the map.

I'm not sure if there's a trick involved or whether, perhaps, the ability to manipulate the map in this way has been removed by the Lindens. I've no idea who I could talk to who would be able to tell me.

I do know I'm going to Natoma later today. I'll fly up to 4100 meters and fall all the way to the ground with mouselook on and invisibles highlighted. Perhaps before I go splat at 20 meters I will have solved the mystery.
Posted by Cheyenne Palisades at 3:26 AM 0 comments