I Rethink My Southwestern Jewelry 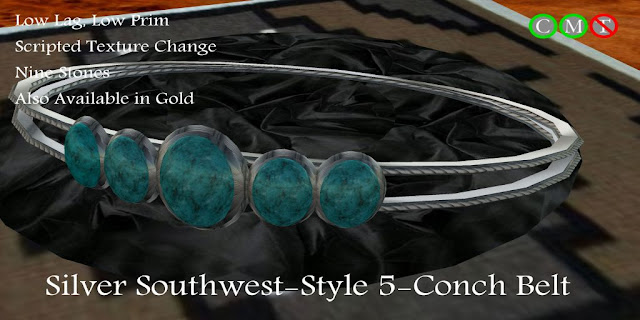 When I was about six months into Second Life I set out to find some Navajo-style turquoise jewelry. Why? Because I like it in real life. I found lots of high prim fancy bracelets and necklaces and armbands, but not what I wanted-- and so I set out out to create some.

I'd had a few months to learn the SL interface and building tooks, but I was still a novice. I didn't quite know what I was doing (in fact, one prim I came across this week is named "Gem-- Don't Know What I'm Doing," but somehow I accomplished my goal. I was soon wearing belt, necklace, bracelets, and earrings in silver turquoise.

People responded well to the jewelry and I set it for sale. I maintained a half-ass store area, but most of my sales were on the twin websites On Rez and XStreet-- and, when Linden Lab purchased them, on the Second Life Marketplace.

Not wanting to co-opt the Navajo Nation, I called my jewelry Southwestern. I had nine pieces (two belts, two bracelets, three necklaces, and two pairs of earrings) in nine stones, available in both silver and gold. That made (quick math exercise) 9 x 9 x 2 items, for a grand total of 162 products to build, photograph, package, and set for sale in three different places.

That pretty much shut me down in the sales department.

I don't know why I didn't figure this out in 2007, but it would have made more sense to have nine products with a script to change their textures.

When the Marketplace did away with magic boxes and I was faced with re-doing all those products, I belatedly realized I need to change my strategy.

And so I wrote a script that allows the owner to select from nine semi-precious stones. The script not only changes texture, but color, and sets the texture density.

I toyed with the idea of including a command to delete the script, but as each piece contains only a single touch script, and since the jewelry is modifiable, I decided against it. I also decided against having the script change the metal. 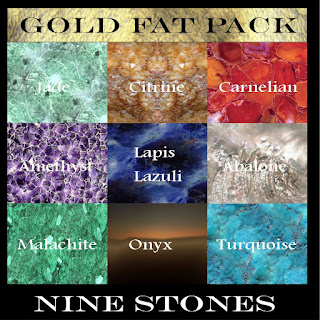 I now have gold and silver sets in vendors at my store space 4000 meters above Whimsy. Within a day or two they'll be available at the Marketplace.

I'm going to move forward with creating a real store. Flights of Fancy will be athe wonderful (and huge!) Sub-Orbital Asteroid Retreat here.

I've set the vendors to give a 25% discount to members of the Flights of Fancy group; I'll also be sending gifts to group members twice a month.

I'll be documenting all this on my Flights of Fancy blog. I'll only occasional post store-related material here-- mainly when I'm excited about something.

Photos of Jewelry are below the line. 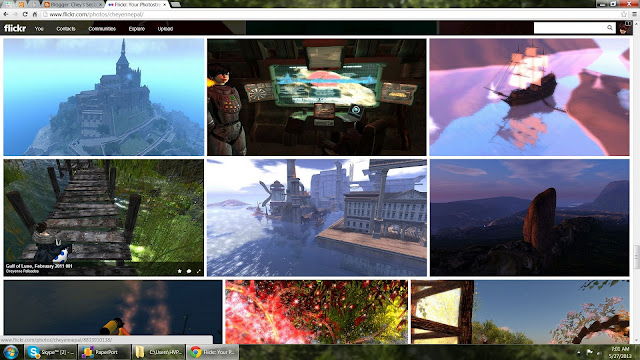 Yahoo owns the photo-sharing website FLICKR (and now TUMBLR). Last week the company rolled out a new and much-improved interface for FLICKR. Even better, the old limit of 200 photos for free accounts is gone. Now you get 1 TB of space (think a half million full-sized photos) and lots of space for videos. The 4-set limit is gone, too! Read about it here.

My FLICKR account has been mostly static since I used up all my slots years ago. No longer. I spent most of yesterday putting in photos I couldn't before. They look wonderful in the slideshow mode.


Posted by Cheyenne Palisades at 7:04 AM 0 comments

Last week Sweetie and I drove from her fortress of solitude in the Ramapo Mountains to Piscataway, New Jersey for the Steampunk World's Fair.

I Would Bend Over Backwards for You 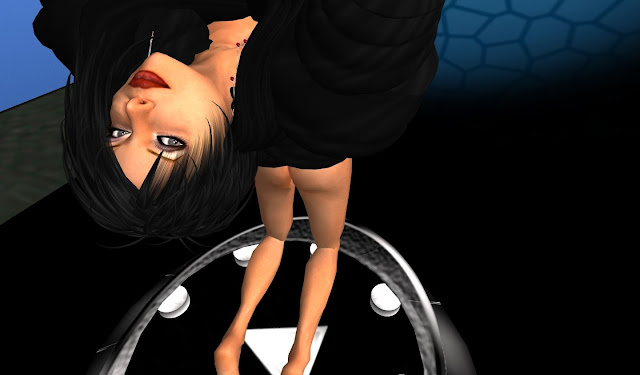 While browsing through my Second Life photos I came across this one of me, taken by the notorious Sweetie.

Posted by Cheyenne Palisades at 7:44 AM 0 comments 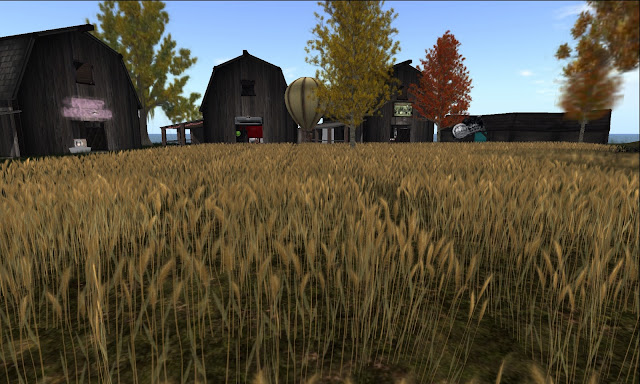 Posted by Cheyenne Palisades at 1:13 AM 0 comments

Posted by Cheyenne Palisades at 11:28 AM 0 comments