Tonight, in my e-mail in-box, I found an ad from Linden Lab: Decorate Your New Linden Home Today!

I cannot believe the ad features a child avatar!

I've made my feelings about child avies known in previous posts (see here and here). I will not discrminate against and and am opposed to those who do, but for most people, myself including, there's a definite creepiness factor.

Considering Linden Lab's previous shying away from controversy, it beats hell out of me why they would release an ad picturing a happy Second Life family with what appears to be a five-year-old child.

And not only a five-year-old child, but one that seems to be sexualized. I mean, those are clearly breasts. (Thanks to Sweetie's eagle eye for spotting that.) 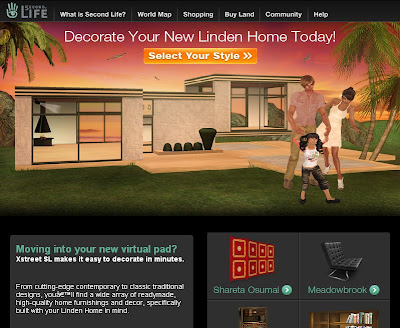 This morning, during our daily morning phone call on her drive to work, Sweetie asked me to write a blog today.

This post is not only FOR Sweetie, it's ABOUT Sweetie!

Second Life rainbows and tacky flat flowers
Clackety footwear, bad particle showers
Vampires who spam you and horrible bling
Those aren't some of her favorite things

Butt skirts and avatars who are smart asses
Walking through lag like one walks through molasses
Linden trees, camping, and cheap freebie wings
Those aren't some of her favorite things

Tribal tattooing and burly male avis
High A .R.C. and intrusive voice chatting
Copybots, griefers, and M, our new king
Those aren't some of her favorite things

Posted by Cheyenne Palisades at 9:33 AM 0 comments

M. Linden has had the stewardship of Linden Lab for a while now, and many residents-- myself included-- think they see the Lab heading in a disastrous direction.

And what direction would that be?

Well, toward a Second Life that comes as close to Facebook a possible.

Toward a Linden Lab without a quirky sense of humor-- and a Linden Lab with new employees in place of the passionate founding long timers, who have been and are leaving in disgust-- those who haven't been fired, that is.

There's no doubt M. was given a big job-- but more and more data points make it increasingly difficult to believe he has anything else in mind.

It remains to be seen whether Second Life will ever appeal to the Farmville addicts of the world and thus bring M.'s dream to fruition-- but I rather think not. Second Life, with its difficult (and yes, even 2.0) interface, its griefers, its chaotic and entreprenureal society, its lag, and its ongoing difficulties with running web content (still clunky and slow) just isn't going to cut it with more than a few of the Farmville folks. Let's face it, it will never be huge. If it were going to be huge, it would be already. And duh, it's not huge, not in terms of concurrent users, and frankly, the ability of the grid to scale beyond 80,000 or so online is questionable.

One thing is certain: if M. steers Second Life much further down the path he is taking it, the people who are passionate about Second Life-- and especially those, like me, who spend hundreds of dollars a month on sims not that much different than those on the OS Grid-- will no longer be here.

Perhaps M. envisions tens of thousands of sims blanketed with Linden starter homes and a populace content with 117 prims and spending lots of money on virtual fashion. I don't see it happening.

And why? Because most people eventually come to want more prims and more land and more privacy. They buy big swatches of land on the mainland or private islands and send their tier to Linden Lab monthly.

So what are you gonna do, M? Keep them in their 117 prim homes? Or sell them the private islands they'll want? And if the latter, what purpose does it serve to piss off and run off those already giving you $295 USD or more a month?

Maybe, M., you should consider taking a job at Blue Mars. It is, after all, the static, limited world which you seem to want Second Life to become. It would save you a lot of time and effort.

The Lindens have just announced the creation of a new entry experience for first-time avatars.

This isn't the first time the entry areas have been revamped. Does anyone remember the cityscape with the ubiquitous Segway? I don't think that lasted long.

The most recent iteration of the entry process was to shunt newcomers to various corporate-sponsored infohubs. I don't think that one ever got off the ground.

A few months ago the Lindens suddenly and without warning disbanded the long-established mentor program.

Last night (Thursday night), Sweetie and I took a trip to the publicly-accessible entry areas to check them out.

I have to say, the Lindens might have gotten it right this time.

Someone-- I disremember where I read it-- said the new Help Island looks like an Apple Store, and he or she was right. The new site is all white, and, surprisingly, well laid out.

There are a half-dozen rooms, each posting one simple challenge for the avatar. Room 1, for example (where the new avatar enters Second Life), features a simple diagram telling the newcomer how to move about with the arrow keys. Other rooms teach flying, sitting, and rudimentary camera control. You might remember the parrot from your own entry experience.

The graphics are well done. Whichever way avatars turn, the task at hand will be in front of them. 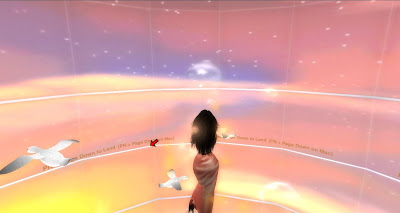 Note the instructions in the learn-how-to-fly room, above; they direct avatars back to the ground.

The last room directs avatars to Discovery Island, where there are additional things to learn. A world map stretching along the wall gives newcomers an idea just how big Second Life is.

Discover island is less structured; you can wander about, riding floating platforms and talking to other people. Check this postcard; the camera swivels when you sit on a poseball and sets up the shot. 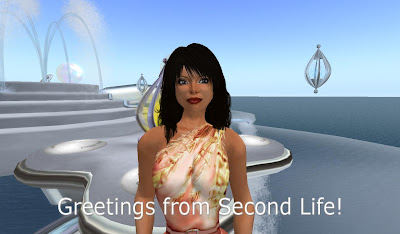 A building on the far end of the pavilion offers a few freebies... 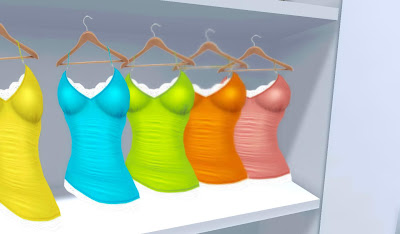 ... and displays furniture for the various Linden houses. 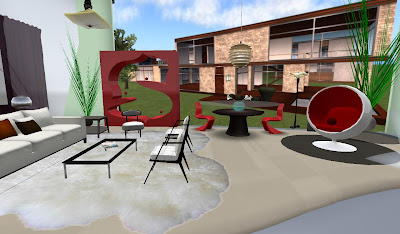 All nice and well, right?

But guess what? Nowhere is there ANY mention of building. I didn't realize it until I came across Marianne McCann's comment on the Linden blogs.

Posted by Cheyenne Palisades at 12:31 AM 0 comments

I was happy to find, when I checked my mailbox on Wednesday, a brown postal service envelope containing my wallet.

All my ID was there, and my bank card. Missing, of course, was the $10 or so in cash and change.

I suspect the thief tossed the wallet away and some honest person found it and turned it in at the P.O. Or maybe the thief had a fit of remorse and dropped it in a mailbox. If the former, there's someone I would like to thank and can't.

I'm sure happy to have my wallet back!

I have to say I went to Nashville a skeptic and came away a believer. That hotel is definitely very Second Life!

I should know better than to ever doubt Sweetie!

Wouldn't you know it, I just found this post by Dusan Writer comparing Las Vegas to Second Life.

Posted by Cheyenne Palisades at 3:01 AM 0 comments

As I explored I kept finding strange things. 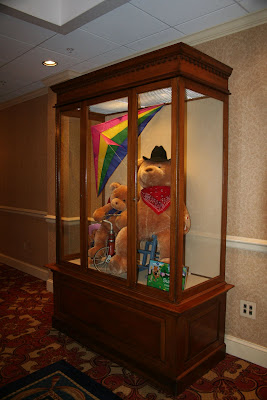 I waited a long time for this picture to rez. It never did. 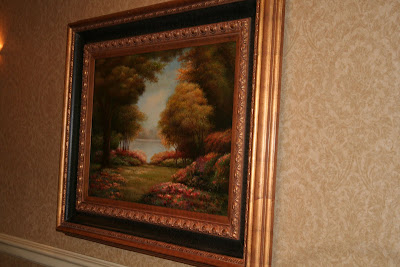 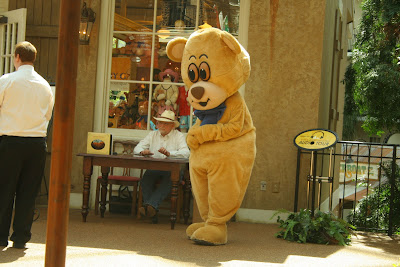 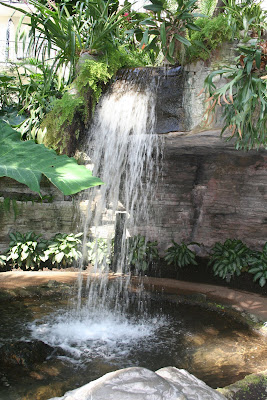 Very real life, isn't it? But watch this! 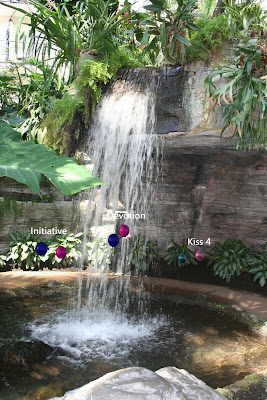 Posted by Cheyenne Palisades at 2:11 AM 0 comments

Second Life is notable for its whimsical content. So when I saw this sea monster in an Easter bonnet at the Opryland Hotel, for a moment I wasn't sure just where I was. 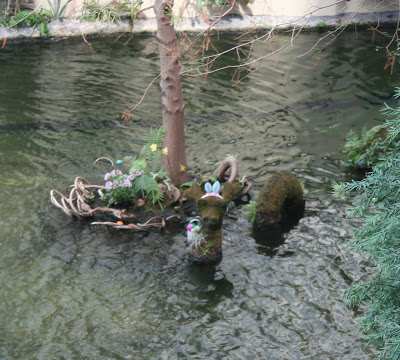 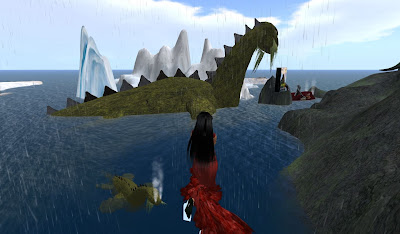 There were sculptures of every sort... 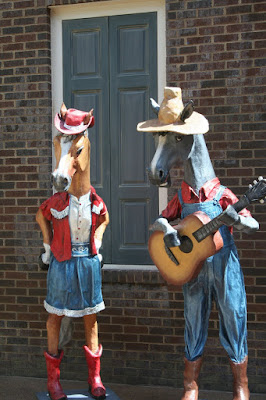 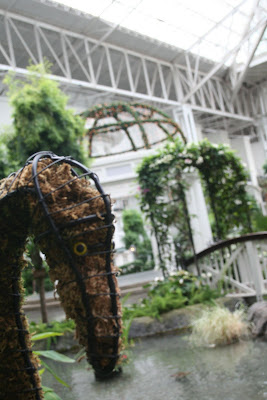 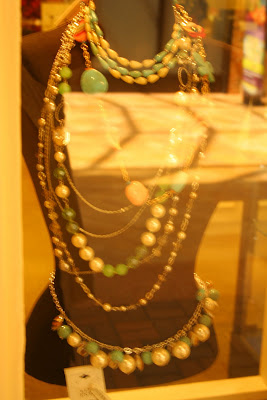 Some of the hotel's content was substandard-- for instance, this three-prim tree...

But most of the primwork was fabulous! 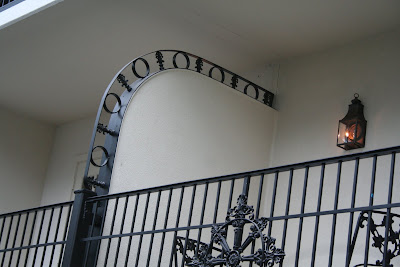 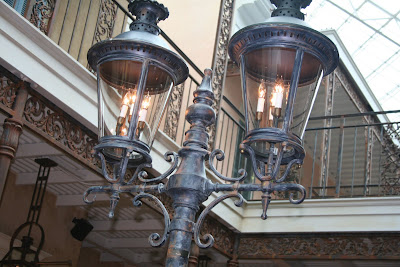 Posted by Cheyenne Palisades at 12:29 AM 0 comments