The Bob Saga: XXXXIX: Victory Snatched From the Jaws of Defeat 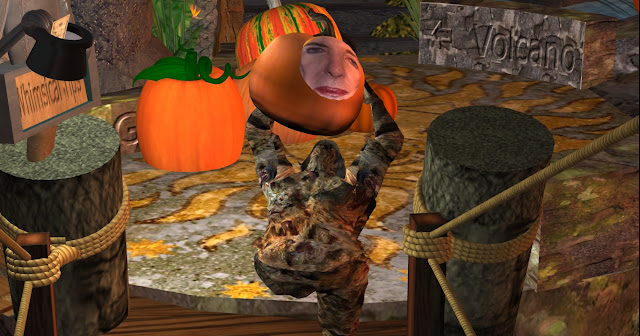 XXXIX: Victory Snatched From the Jaws of Defeat

Bob was in imminent danger. Golemdum-- or was it Golemdee?-- was lumbering toward him, with instructions to destroy. The golem not only had a good head start; the crowd, which was now hysterical, was between us and our beloved Bob.

I jumped high into the air and crashed to the ground. "Damn!" I said. "It's a no fly zone!"

"What a time to be in Viewer 2!" I lamented. It would take me hours of menu parsing to find the right command. I, too, was helpless.

I could see no hope. But then something amazing happened. A grinding, booming sound that seemed more like a rock slide than a voice said. "No! Love Bob!" The golem holding Diva's head had spoken!  We all watched in fascination as it drew the pumpkin containing the head of I'mSoNotADiva Bartlett far behind its head and hurled it, two-handed, at its brother golem.

"Nooooooo," came Diva's voice, in full Second Life stereo, as the pumpkin passed over the heads of the crowd.

"Noooooo," continued Diva, as the pumpkin tumbled through the air.

"It's Diva doppler," someone else said.

At that moment Neelix realized his full potential as a reporter. "It's a forward pass!" he said. "The receiving golem is going long... long... the pumpkin is falling short... No it isn't!" Just then, the pumpkin struck the golem from behind at the knees. It-- the pumpkin, not the golem-- shattered, throwing pulp and seeds 30 meters in an outstanding particle effect. The golem balanced crazily for a long moment, then tumbled over the railing, crashing  into the dry creekbed far below. I watched it shatter into a million crazy pieces of clay.

"The receiver is down," cried Neelix. "Fumble! Fumble!"

On the bridge the gourd-juice-drenched head of I'mSoNotADiva Bartlett spun crazily on the planks.

Posted by Cheyenne Palisades at 9:07 PM