Our First Lives March On 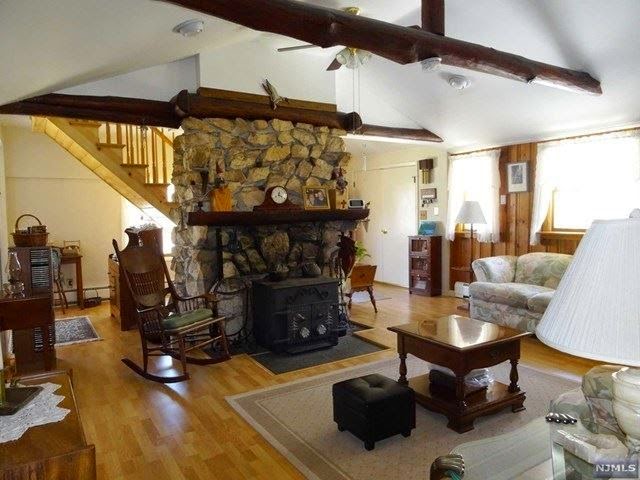 So... after years of looking for a house in Rockland or Orange Counties in New York or Bergen or Passaic in northern New Jersey, Sweetie and I finally found one. We couldn't quite afford it, but unlike every other house we had looked at, it wasn't 1) falling down; 2) more than an hour from Sweetie's job; 3) reeking of black mold; 4) on the top of a steep hill; 5) tiny, or 6) have parking for only one car. Moreover, it met Sweetie's criterion, and mine. Her criterion: master on main. My criterion: our putative house had to have character. It had to be cool. Just another tract house in a suburb? Unacceptable. And finally, it had to be (she jokingly says) affordable.

Now, I live in Atlanta. Nice houses can be had for well less than $100,000, and my property taxes are less than $1000 a year. That means by comparison any house in the Hudson Valley in New York or in New Jersey will have an astronomical cost and astoundingly high property taxes. Our house was no exception, but it was at the lower end of the market, was less than ten miles from Sweetie's job, had plenty of room for both of us and our stuff, had no major problems, had the master bedroom on the main floor, and the area had character.

We have black bears! Tell me that doesn't show character! Not the sort of character many of my readers might appreciate, but I certainly do! We will have to keep our trash inside the house or locked away in a wooden enclosure. What could be cooler than that!

Which reminds me of the time I stared down a black bear on the Appalachian Trail. I had hiked from Fontana Dam to Spence Field in the Great Smoky Mountains National Park. The distance is 18 miles, and experienced long-legged hikers can do it in a day if they push it, but I, with my short legs (28" inseams) and out-of-shape body had spent two days and three overnights (I left Fontana at dusk, so it really took me only two days). I had been eating dehydrated meals, saving add-only-water buckwheat pancake mix and maple syrup and country ham for my last breakfast before hiking down the mountain to Cades Cove. I'd been thinking of that breakfast since I left Fontana and was having a fun time cooking it on the fire pit that stood just outside the shelter. When the pancakes were done and the ham was sizzing, I looked up to see a big bear standing on its hind legs not ten feet from me. It was clearly saying, "I smell breakfast!"

I was holding the pan with the ham in my right hand. I grabbed the plate with the pancakes with my left and straightened up and said, "I know you're hungry, but so am I and this is my breakfast." I was prepared to dash for the safety of the shelter, losing the food if I had to, but the bear, which I think understood what I had said, sank onto all fours and ambled away.

So anyway, I respect bears, but I'm not afraid of them. New Jersey is overrun with black bears and I'm happy to share space with them and smart enough not to get between them and food-- except, of course, for that time on the AT-- so bears are a big plus in my coolness category. So is the lake that's two blocks from our door. The beautiful NJ State Botanical Gardens are even closer and are a joy to walk. 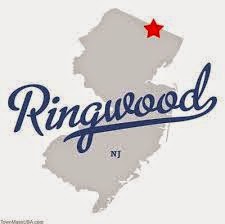 The location, by the way, is Ringwood, a town of 8000 that was created as a resort when the region's iron mines played out in the early XXth Century. The town is separated from flatland New Jersey by a thousand foot-tall mountain. It's rustic and peaceful and yet not far from shopping and is only an hour away from Manhattan by bus, which I can catch at the library, just a mile from the house. And then there's Cupsaw Lake: 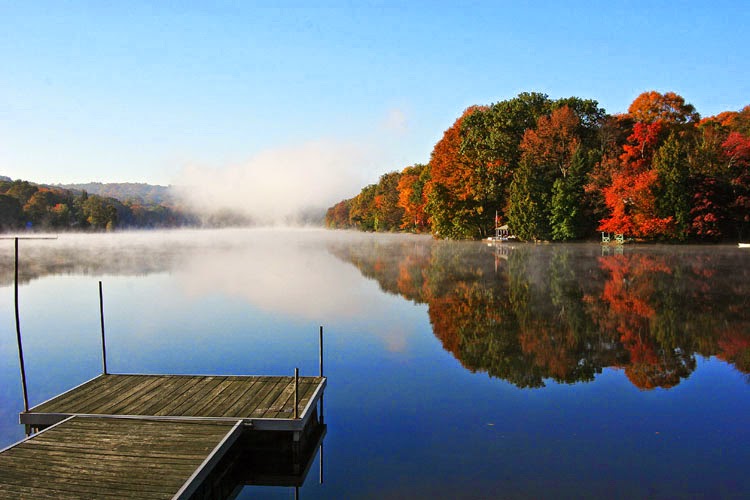 So yeah. A location that meets my coolness criterion.

My house in Pine Lake, GA was built in 1936 as a one-room cabin. Our house in Ringwood was built in 1940, also as a cabin. It had more than one room in its original form, but I won't quibble. My house in Atlanta had several additions, and so did the Ringwood House. The photo at the top of this page shows the living room, which is in the new part of the house. That's not our stuff in the photo, by the way. It's a photo from the real estate listing. The beams are original to the house.

Here's a beautiful free-standing pine staircase that leads two two huge rooms upstairs. The largest is 24' x 17', the smaller (which will be my office) is 13' x 17'. 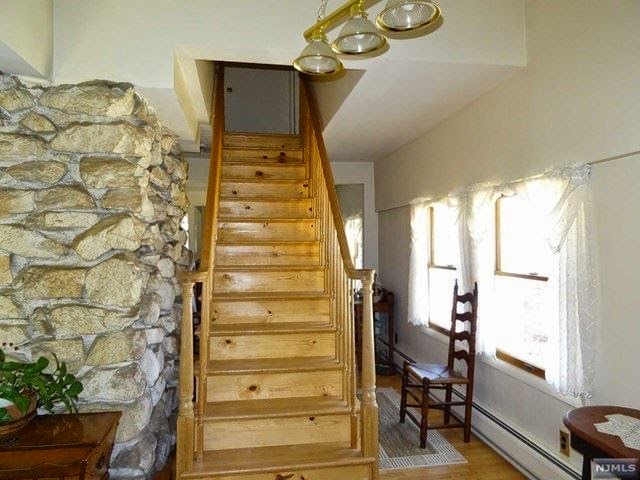 There are three bedrooms and two baths, a huge kitchen and dining area with a pantry and a large, dry concreted and framed basement with four rooms. So yeah, the inside of the house meets my coolness criteria.The house is plain on the outside, but Sweetie is already developing plans for fabulousing it up.

A few days after we closed on the house we moved Sweetie and her stuff in. We were not so great with our orchestration of the relocation, and so wound up renting a U-Haul van to get the stuff we left in her apartment when the moving van came. We loaded the U-Haul in a cold rain and made ourselves sick as a result.

Upon my return to Georgia, my plan was to clear some of the clutter out of my house so I could show it-- but I had let it be known around my little town of 800 that I would be selling, and when I arrived people lined up to see it. The first couple to walk through bought it. Here it is, by the way: 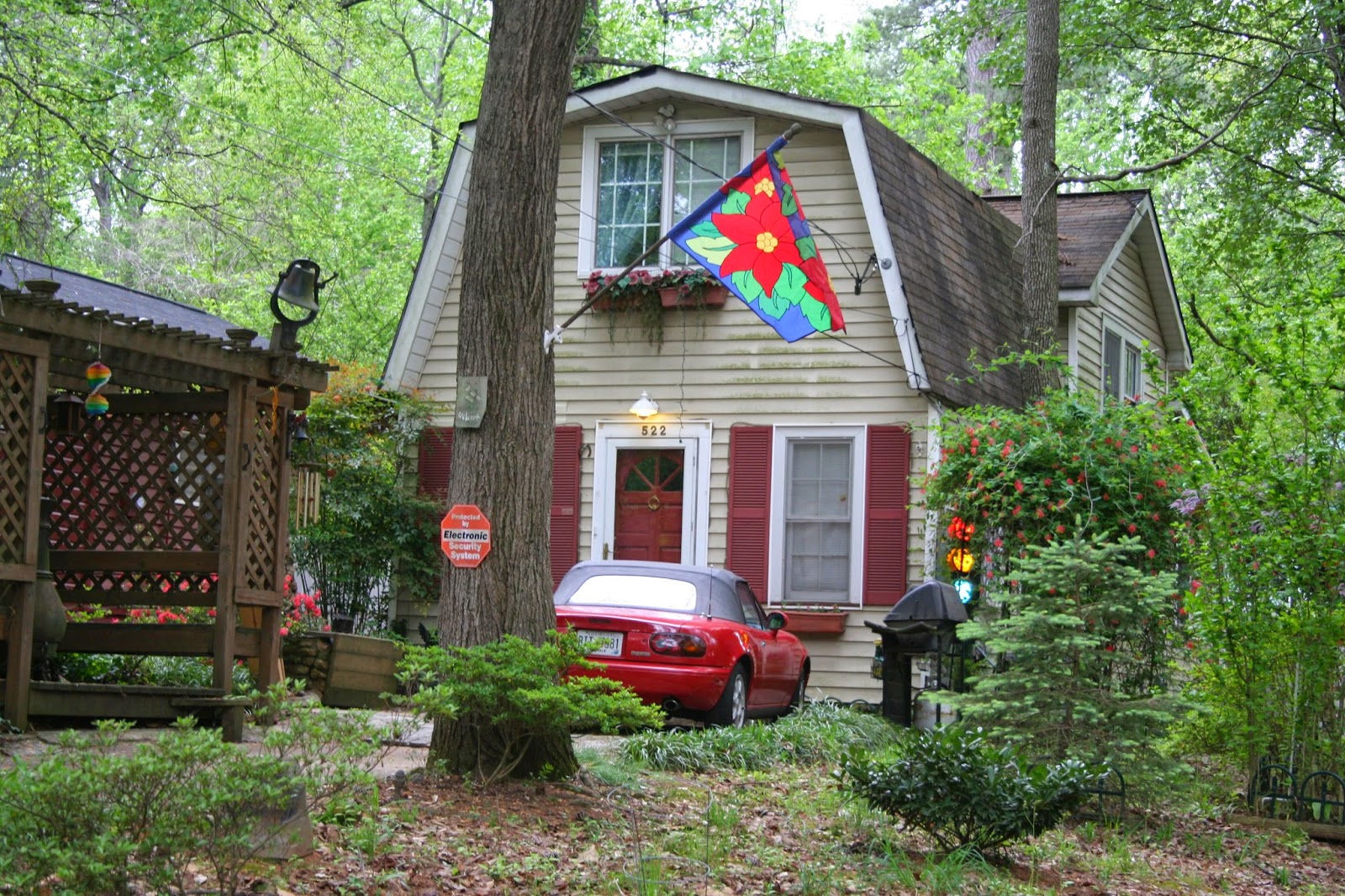 I've been packing boxes for some ten days now. I favor the 12" x 12" x 16" boxes Home Depot sells for $.74 each, for they hold a good bit and are easy to lug around. I've packed some 150 of them and expect to pack about 50 more. 200 boxes will take only 300 square feet in the 1650 square foot U-Haul truck I'll be renting, leaving plenty of room for my couch, chair, table, futon, bookcases and bed, the boxes I have in a rented storage facility, and, hopefully, my 17' canoe. Some time in January I expect to be headed north. When I arrive in New Jersey, Sweetie and I will be married in real life.
Posted by Cheyenne Palisades at 2:23 AM 0 comments