Here I highlight new and existing feature on our sims, or something Sweetie and I have created. I'll update the page every now and again. Readers can scroll down for earlier entries. 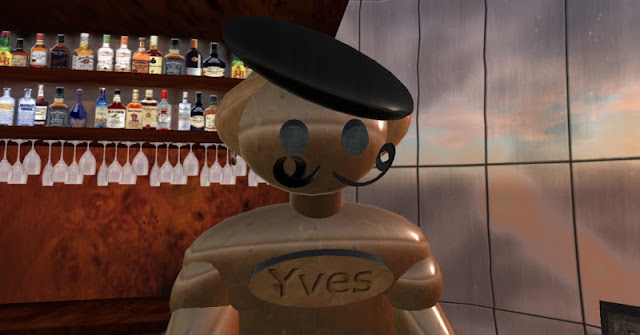 Yves, the robot barman at our PG Den of Iniquity, tries his best to please, but he was created from low-quality metal and tends to fall apart (literally).

Read Yves' sad story or go here for a direct teleport, but it's more fun to start here. Summon the elevator bot and ride to the top of the blimp tower, then walk the ramps and rez a little train to ride to our PG Den of Iniquity. You'll find Yves just through the doorway, eager to please. He won't succeed. 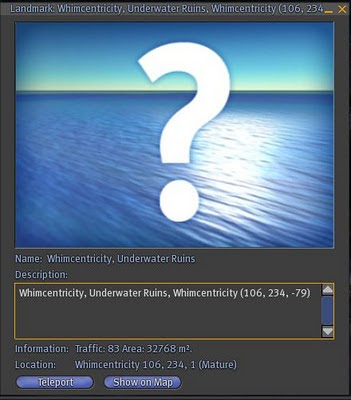 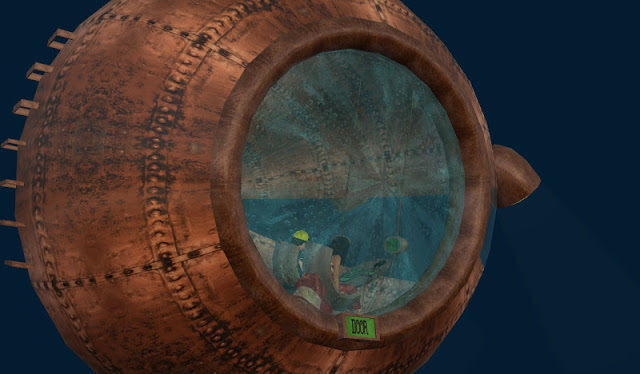 Read about our daring exploits below the Second Life grid! It's all here in this multi-part series. Click Later Posts to read each successive installment. 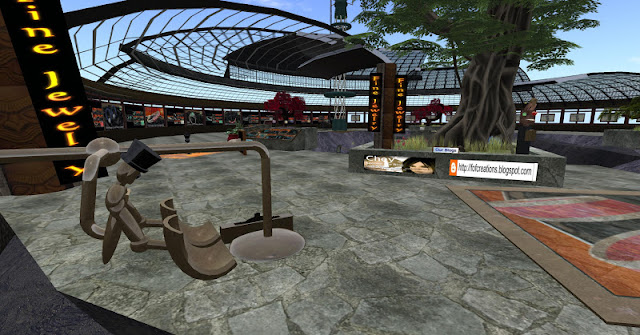 Several years ago Sweetie and I created a build 4000 meters above Whimsy. We didn't do much with it for a while, but eventually it told us what it wanted to be.

80 meters above a blimp floats. Called the PG Den of iniquity, it holds Whimsy's many games-- bowling, horse racing, a variety of arcade games, a mechanical bull, darts, and K.R. Engineering's dice games Greedy, Greedy and Pentadee, to name a few.

I wrote here about the PG D of I (scroll down to see), but haven't said anything about the 100-meter-around tortured torus prim that constitutes the main build. Or no, wait-- we decided we captured a passing asteroid. That's it! Forget what I said about torturing a prim. That's illegal in most states, anyway.

A portion of the space is devoted to my jewelry. Another sections will be dedicated to what we call Whimsy Freedom Freebies (think freebie boxes that run, crawl, hop, or fly away from you, hoping you won't catch them and get what's inside). And down below-- well, let me just say we hope to render the CERN particle accelerator obsolete. We will be looking for the legendary and possibly mythical Higgs-Boson Prim.

Surly French robot lifts take you to the top of the dirigible docking tower or down to the hollow interior of the asteroid where our take-that-CERN apparatus is developing.

Read about the Asteroid Sub-Orbital Retreat (choose Later Posts to continue to Parts II and II, or visit it here.

Happily, Kaboom will remain on the grid!


After talking over our finances, Sweetie and I decided we can no longer afford our Whimsy Kaboom sim.

We absolutely love Kaboom-- my home is set there-- but we never planned on having it. We got it as a consolation when, one week after I bought Whimsy for $1595 USD, the Lindens dropped the price of sims to $1000. They gave us three month's free tier, but that was used up more than three years ago. Since then Kaboom has cost me more than $3000. Letting it go will save $95 a month (grandfathered price) for the rest of my life. 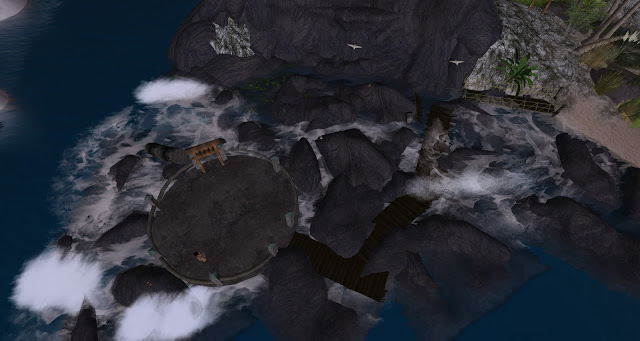 Long-time Whimsy resident Feminist Expedition has given up her 4096-square-meter parcel on the southeast corner of the sim. Sweetie and I transformed it into a desolate, rock-littered seashore.

Paths lead to peaceful meadows and an overlook of the chaos below.

Read about it or go here to visit.

The PG Den of Iniquity 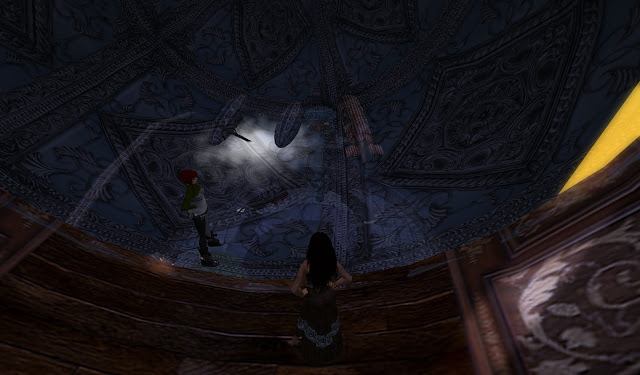 For the past month Sweetie and I have been hard at work at 4080 meters, building a new home for Whimsy's assorted games (like Greedy Greedy, mahjong, a mechanical bull, Whack-A-Mole, a shooting gallery, and a bowling lane). Until now they've been on platforms at 1800 meters, but it was just less-than-fabulous.

Now the games live in a huge airship that floats 80 meters above the big build at 4000 meters that will eventually be my store. A rail track runs from a blimp docking tower far below to what we have named the PG Den of Iniquity.

Go here to read more about our PGDoI; after reading, select Later Posts to see the profusely illustrated second and third installments. 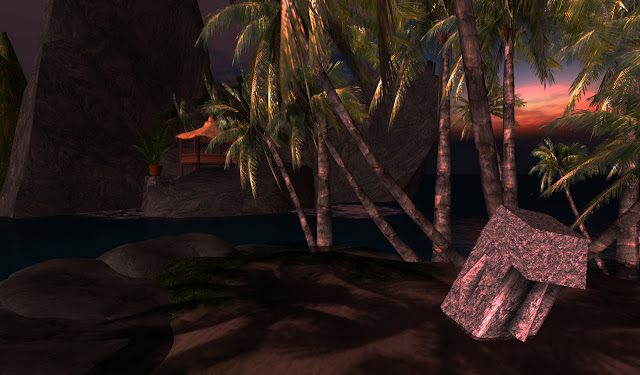 I've done nothing monumental in Second Life lately. I stand on the sea decks at Whimsy Kaboom day and night and watch the sunsets and the cavorting humpbacks. I spent time at Help Island Public for reasons I don't quite understand, occasionally rescuing a new citizen and showing him or her just what Second Life can be. I make outfits, finding clothing I had forgotten I owned. This for months now.

I think my malaise was due to the impending ability to stretch prims beyond ten meters. When that finally arrived with the mesh server software, I got busy, saving 200 prims on Whimsy Kaboom alone (the Robot Sanatarium, you see, had a lot of spans that required several 10-meter prims).

I've a big list of projects: Rework the erupt mode on the volcano Pele, get my powered bathysphere finished and on the Marketplace, finish the huge build 4000 meters above Whimsy, and build a ridiculous avatar-tossing robot-powered transportation system to move people between the ground and 4000 meters.

None of those projects are underway, however, because finally, after years of for some reason being blocked, I'm building my personal website. It's complex and will hold a lot of content, and so is a lot of work. Sweetie told me I needed to work on it 20 hours a week, and, after months of obstinacy in which I offered every excuse about why I couldn't do it, the framework of the site is emerging.

I'm in world every day. I explore a bit, keep my blog updated, and watch the whales while I listen to Hawaiian music. 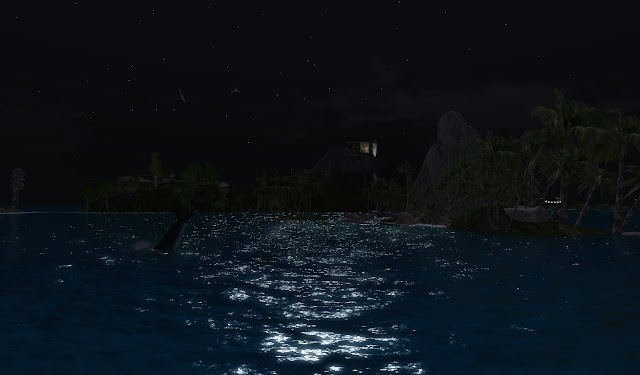 The Temple of Doom 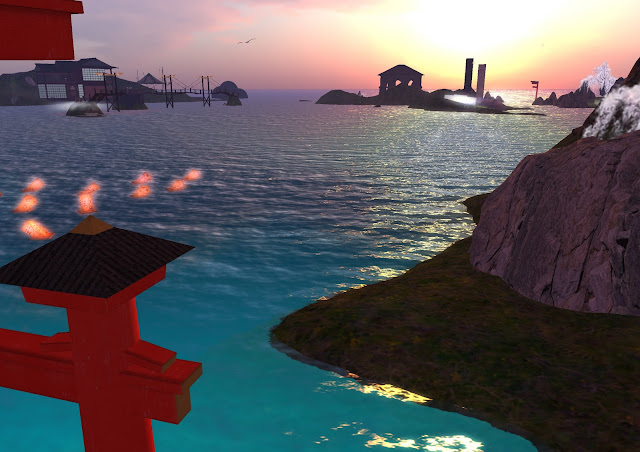 Beneath This Calm Surface ... 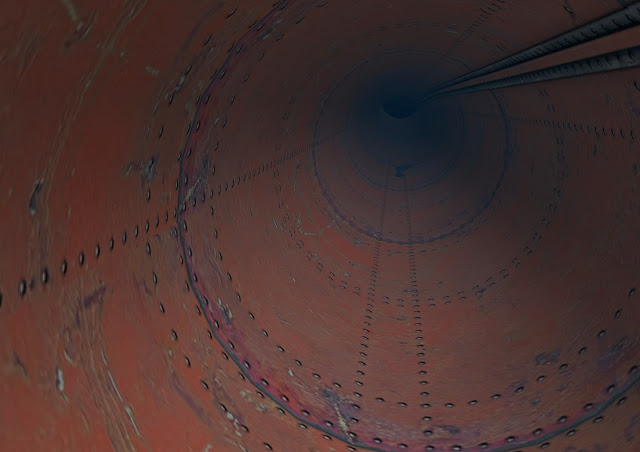 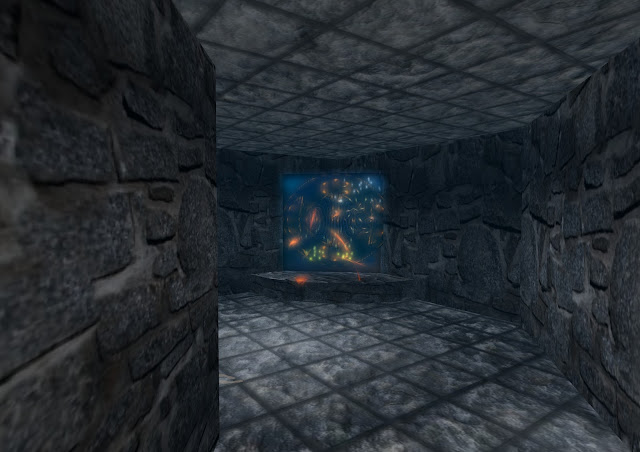 ... Lies the Temple of Doooom!

We've been reworking the terrain on the western half of Whimcentricity to reroute the labyrinth. That's because the southwest corner is now part of the four-sim stage area set up by our neighbor to the south, Leaf Shermer.

The path for the new labyrinth is laid out, subject to a polishing by Sweetie in Backhoe, a Mac program that develops terrain maps. But the big news is an underwater temple or ruin. The top floor will host art exhibits, and the bottom floor...

Well, the bottom floor is pure Indiana Jones. Think snakes, piranha, giant mousetraps, dancing lobsters, and a giant tiki who throws smoulder rocks at passers-by-- with everything curtained in inky blackness (which is yet to be installed).

The build is far from complete, but open for walkthroughs. 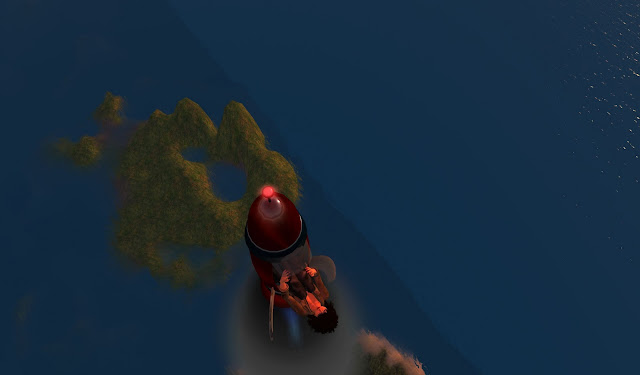 Whimsy has had quite a few tweaks lately. There are new bridges and cuddle areas on Whimsy Kaboom, a new grass texture for the third level of terrain on Whimsy, and nice low-lag one-prim butterflies here and there. But the things that are the most fun make Whimsy more dangerous rather than more beautiful.

There's now a Don't Sit in the Geyser poseball on Whimcentricity. Avatars walking toward the renegade geyser Gary encounter a barricade and a warning sign. If they choose to disregard it and sit in the geyser anyway, all I can say is, I hope they're taken out Whimsurance-- and the rider!

I cannot fail to suggest you ride the V2 rocket here on Whimsy Kaboom.It will blast you realistically into space. Be sure to look down, as the ground dropping away is an awesome sight. The rocket is a teleporter (avatars will wind up anywhere in the sim, as set by the owner). And yes, it's for sale, $795 on the SL Marketplace and $750L in world.

Whimsy had a freak Thanksgiving snowstorm, and now the land is white. I said what the heck and set out Christmas decorations. I had a talk with Leaf Shermer, and we decided to make Whimsical Mischief the source of all Christmas tackiness. I put out every stupid high-prim, full-bright, badly-textured Christmas hoohaw in my Inventory. See it on the Whimsical Mischief sim (but if you arrive after 1 January, don't be surprised if it's gone). 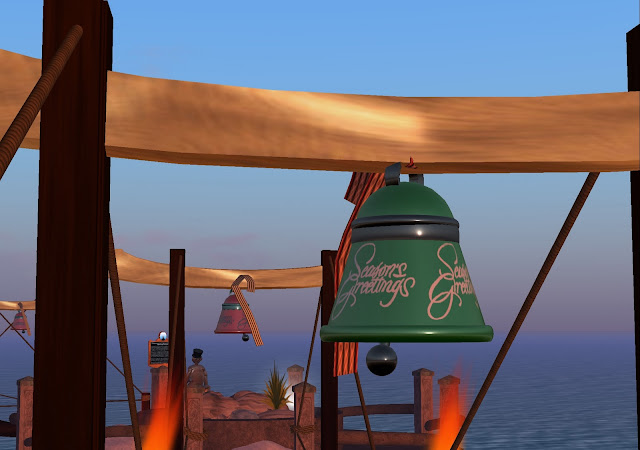 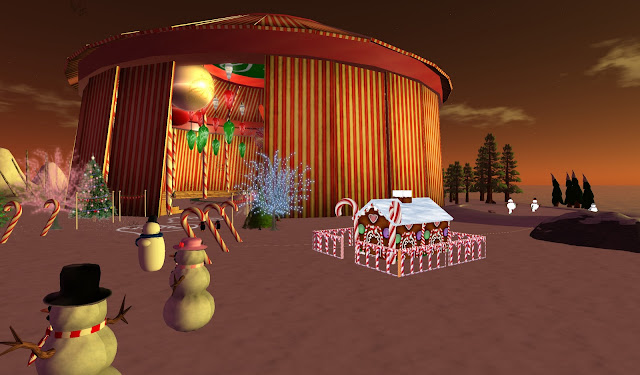 Tonight I replaced Whimsy's old teleport sign with this one: 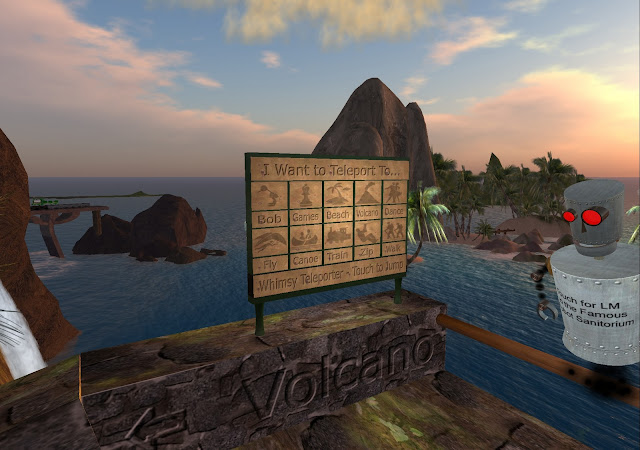 The old board was designed to look like the signs used by the National Park Service here in the U.S. The new sign is brass, with engraved lettering. From the sign, visitors can visit ten of Whimsy's points of interest. The sign sits at the entry point to Whimsy, here. (Late Note: With Sweetie's help, I moved the sign; now it sits at the bottom of the entrance ramp.)

You can find the sign at the sim entry.

Ongoing coverage of the kidnapping of our bobbing bird is keeping me busy in this blog. Whimsy has a few Halloween decorations, but otherwise our sims are unchanged. Start reading The Bob Saga here. 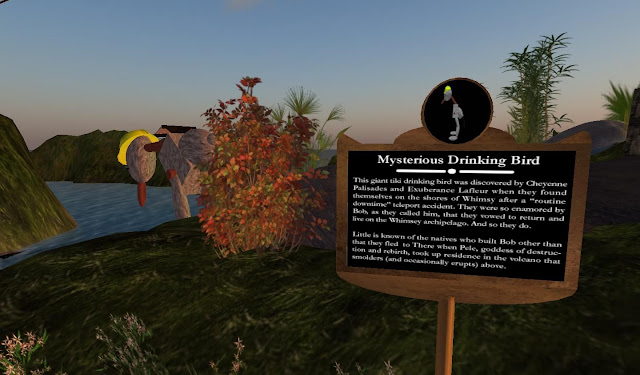 Sweetie and I have been working on the new terrain for Whimsical Mischief. She has created a remarkable underwater landscape which will soon enough be filled with wildlife, caves, and a rail line. She's still smoothing out the edges before we put prims down.

We have a new sim on our little grid-- Whimsical Mischief. There's not much there yet, but do cruise by every now and again and watch it as it develops.We're in terraforming mode this weekend.


The Follow Virtual World Tour In a Day Concert

The Follow concert last night, spanning four sims on our bloc, was fabulous. Here's the writeup.

New Sims for Whimsy and Eccentricity

The big news around Whimsy and Eccentricity this week is the upcoming addition of two sims to our little bloc of four. Whimsical Mischief, which until now was positioned one grid square north of Whimsy Kaboom, will be moved south of Kaboom, and Leaf Shermer's new homestead sim Idiosyncrasy has already been delivered. It sits west of her sim Eccentricity.

One of Whimsy's newer features is a nice little swamp near its southeast corner. See if you can find it! 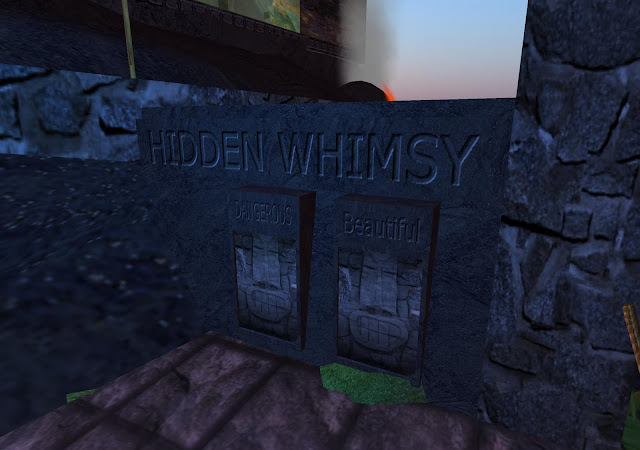 The theme of Whimsy is Beautiful and Dangerous. For every breaktaking spot, there's a pirinha waiting to bite or a hot smoking lava rock about to fall on your head. Hey, don't blame us for living in a geothermally active area! It's why we give out hard hats!

To illustrate our theme, we've created two sets of teleportals. One leads folks to Whimsy's most beautiful spots... 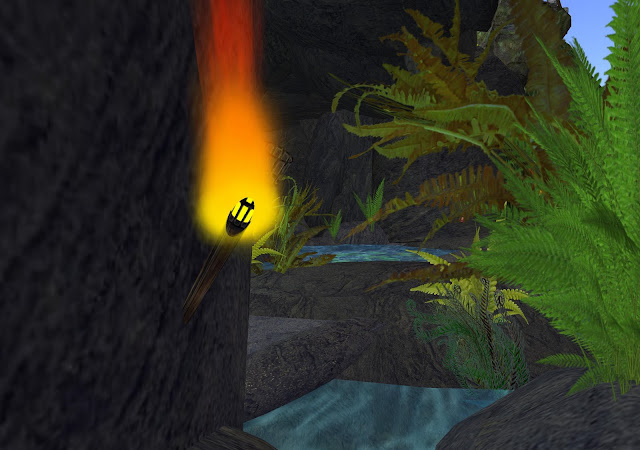 ... the other to its most dangerous. 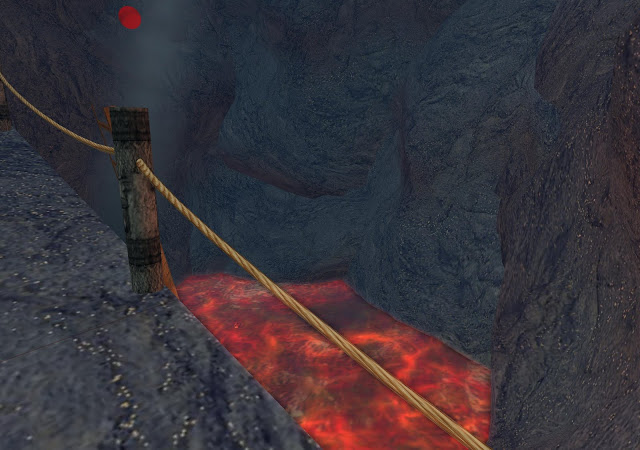 To use the portals, click the door to open, then click the spiral to teleport. Near each landing point you'll find a door that will take you to your next destination. Eventually, you'll wind up back at the starting point.