Photo: Could not find a sufficiently non-nasty she-male photo.


It Needed… A Fish

This morning, idling away time on Second Life before going to work, I took a look at the little pond I made by the railroad tracks on Fem’s Island on Whimsy. It was nice—animated water, lily pads, frog sounds, sits—but it just seemed to need something.

I realized what it was. It needed a fish.

I mean, what’s a pond without a fish?

I remembered a little flexible fish I bought long ago, maybe around December, 2006. It swam around Pele for more than a year and had been sitting in inventory since the move to Whimsy—I hoped.

Yes! There is was!

I put it in the pond, and the pond was complete.

It was such a NICE fish I decided to go grab a couple more. I clicked on the fish, selected the creator, and looked at her profile.

Well. “Hot” (her description) she-male, ambisexual, gender-fluid, sexually amorphous, will-fuck-anything-that-moves-including-you, and she had a store.

In fact, she had a whole sim, a she-male role-playing sim, whatever that was. But it was she who had made my adorable fish, and I wanted more. I teleported.

In the midst of all this was a stable. I thought, awww, until I saw it was filled with three-headed flaming cerebus dogs and such.

I was about to teleport away when I spotted the owner. And yes, her dick was hanging out of her jeans. Of course.

Lots of guys and maybe a few women have fantasies of potently phallic she-male creatures who pleasure them with voluptuous breasts and rock-hard penises. In reality, it’s usually the breasts which are rock-hard, filled with illegally injected silicones. If the she-male is taking female hormones, the penis will be shrunken and nonerectile like that of a seven-yeah boy.

So much for fantasies, huh?

To make a long story short, I IMed the fish-and-bukkaka maker, told her I was interested in some fish but despite my less than vanilla sexual history found the store a bit hard to take on a fish shopping trip. Fuck her if that offended her. I only wanted a fish! I shouldn’t have to deal with bukkaka to buy a fish!

She gave me a landmark and I went there and bought some fish.

The fish shack was on her land, the aforesaid role-laying (how’s THAT for a typo?) sin (how’s THAT for another!), on which she-males and those looking for she-males wander satyrically about with penises exposed and (of course) erect. Oh, the horror!

But just as I was about to jump back to Whimsy, I spotted a huge sculpted cliff on the land. I logged off so I could reappear in she-male paradise and profile-pick the cliff’s creator and maybe get one for myself.

So when I come back in world, I will, until I can leave, be at the mercy of she-males and she-male aficionados. 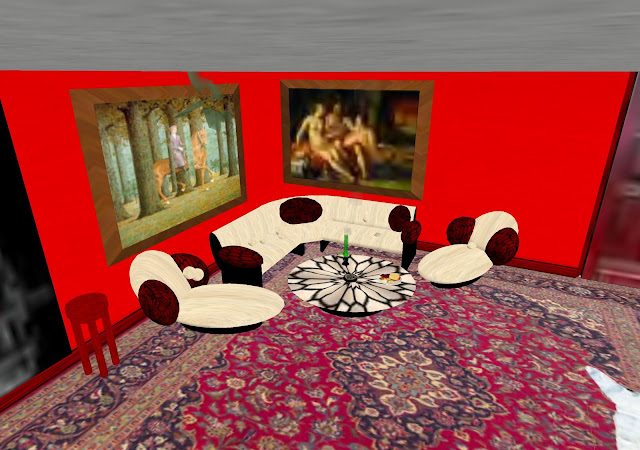 My former property on Dreamland’s Forsaken sim (and Leaf’s) sat vacant for more than four months.

That’s most of a sim empty and not generating revenue for Anche Chung, but that’s another blog.

I’ve been popping over every few weeks just to see what was happening with the place.

Last week I teleported in and found most of the land sold and inhabited.

I was most interested in the volcano, of course—and of course the fool who bought the northwest corner of Forsaken had leveled it and put up a log cabin on a boring flat lot.

I had barely noted this fact when I was booted by his or her security system.

That didn’t stop me, of course, from checking the property out. I just used my camera.

Said cabin was long and narrow and empty, and no one was around. Just a mostly empty lot with a badly-designed and positioned empty house on it.

Which brings me to wonder what the fuck the owner was thinking, putting in a security system. Secure from WHAT?

I mean, it’s not like I could sneak in and poop on his floor or set his house on fire or scrawl graffiti all over it. The worst I could do would have been to leave a prim—assuming, of course, that build was on, which it wasn’t.

Dreamland can be visually striking, but I long ago learned it’s a waste of time to fly about admiring the scenery. There are too many red fences and security bots and no-script flags and object-no-entries set and full parcels which de-rez your vehicle and dump you onto—guess what!— the red fence.

I can understand the reason for security systems and red fences and no-build and no-script settings. I’ve used them myself—but selectively and temporarily, to solve an immediate problem. Then I turned it off.

What is it with these insecure people who lock down their land when they’re not even there? It’s like they’re hiding in a virtual bomb shelter or cowering in a virtual closet. From whom or what are they hiding? Al Queda? A cat burglar? Bubonic Plague? Jesus!

It’s unfriendly and unneighborly, and damn it all, unnecessary.

All of Whimsy allows object entry, building, and scripts. There is no autoreturn for objects. There are no red fences or security devices, and I’ve given the residents extra prims with the understanding they keep a minimum of 30 free to allow fly-over.

And you know what? To date, there have been no disasters. People occasionally leave a prim or two on the land or even a scripted particle object, and one idiot newbie thought she could build a house on the flanks of Pele. When I find such objects (I check every day or two), I just return that individual’s prims. And when people are disrespectful, they get banned. There’s no drama. All has been peaceful.

Of course, some stupid griefer could come at any time and make things miserable for everyone, but that’s easy enough to deal with.

And you know what? It’s worth the risk.

I’m not sure of the highest-ever concurrency, but certainly the highest numbers of avatars online I’ve ever seen posted at logon less than 65,000. The asymptotic growth curve just seemed to level out after we passed 50,000. For the past year or so, the number of avatars online seems to be between 45,000 and 63,000.

That’s a bit puzzling, since the land area of SL has continued to increase dramatically. I would guess the land mass has grown by 500 to 1000 percent since the concurrency rates leveled off.

Granted, much of SL is empty, but something just doesn’t seem right.

Posted by Cheyenne Palisades at 10:37 AM 2 comments

Where's My Mono? They Promised Me Mono!

Where’s My Mono? They Promised Me Mono!

A couple of weeks ago the Linden blog announced Mono would be arriving within days on the main grid in a new server deploy. After the server update, a new Release Candidate would arrive, giving view-side ability to compile scripts into Mono.

Mono, by the way, is a new scripting platform which promises a dramatic increase in script speed and a corresponding reduction of server resources. Faster running time isn’t, apparently, always the case, but if scripts are recompiled into Mono, most scripts should run considerably faster.

How much faster? Well, Whimsy has been averaging about .15 ms total running time; about .13 of this is script time. If Mono should lead to say, a 50% decrease in server resources needed for scripts, the load on Whimsy’s server should decrease by about 45%. Woo hoo!

I’m not sure that’s what happened, because I don’t subscribe to the grid status RSS feeds.

I miss the grid updates on the blog. They were irritating in their frequency sometimes (“There is a problem with the asset server system. Do not engage in financial transactions or rez no-copy objects. “Resolved: Asset server problems.” “The previous post was premature. We continue to have asset server problems.”), but they at least gave me a reason to look at the blog. Nowadays the blog just sits there. There’s rarely a new post.

Sweetie has a Macintosh and downloaded new Release Candidate software. I use (for reasons I don’t quite understand) a PC, and so far no new RC. So even though Whimsy has Mono, I don’t and can’t begin to recompile scripts. Grrr.

Where’s my Mono? They promised me Mono.

I hear about people who have only three or four thousand things in their inventory—but I think I was first rezzed with 10k objects, and my inventory count has risen steadily since.

My current inventory count is 17, 363. That’s not AWFUL for someone nearly two years old, but it’s not particularly good, either. I can forsee the day will come when I pass 20k.

It helped a lot when I got rid of (amost) all of the ridiculous freebies I’d picked up along the way—the penis car, the alpine cabin, the ugly fountains, the badly-textured butt skirts. And it helped when I put all my textures and snapshots into organizers from K&R Engineering. And it helped a lot when I did a search-and-destroy for the About This Product notecards and hovering text scripts and unpack scripts I’d accumulated. And it helped when I deleted the duplicate landmarks that had come with products I had purchased, and when I deleted the calling cards of people I couldn’t remember. But the count continues to grow.

In my defense I’ll say perhaps 1500 items have to do with my Flights of Fancy store. I have at least 300 products in my vendors, and for each item there’s a notecard and at least one photo, and a version of the product in a box. Then there are vendors and signs for the store. It all adds up.

I’m a bit leery of putting a bunch of stuff into a prim and then holding the prim in my inventory; twice I’ve done that, and twice the prim disappeared from my inventory.

What I HAVE found safe is to stuff a prim that remains on the land. And so I have backups of my copyable essential items on a platform high above Whimsy, all stuffed into four or five boxes.

If mounting inventory count should ever force me to, I could put thousands of items into boxes and stuff boxes within boxes within boxes—but it’s awkward, since SL doesn’t allow us to put folders into the contents of objects. Life would be so much simpler if we could!

So, what do you call it when avies of opposite virtual sex hook up. Heterosexual? Homosexual? Or something else entirely?

But when both typists are of the same real life sex, it all goes gender-wonky.

Let’s suppose both typists are male. Is what they’re doing in any way gay? Think about it: one guy in Minneapolis and another in Milan, sitting at their keyboards in their skivvies, making sex talk and sporting hards-on.

But the answer, I’m convinced, is no. I would argue that while it’s not exactly heterosexual, it’s in no way homosexual.

And why? Because, I would argue, it’s a new type of human sexual experience and doesn’t fit comfortably into our existing infrastructure. It’s difficult to categorize the relationship in the heterosexual-homosexual binary because neither term adequately classifies it.

If we don’t look behind the mirror into real life, the pairing is heterosexual in nature. If we’re in the real world and can’t see through the mirror to the virtual realm, it’s a homosexual pairing, the Minneapolis-Milan thing.

In truth, the relationship is both heterosexual and homosexual, and so it’s neither.