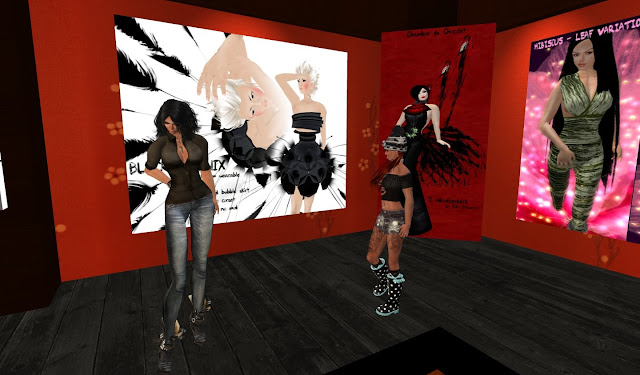 There was a sale on a Ishi Otawara's Chambre du Chocolate store, and Sweetie and I jumped there (I bought an on-sale dress for just $100L!)

We were no sooner in the building than I started hearing annoying sound spam (Hey, Bayatch!" and chat to match.

Oh, well, to each his own, I thought. But when I walked up the ramp to the top floor and walked past the two (they had positioned themselves so the walkway was blocked. I walked past without a word (excuse me wasn't really necessary, considering they were blocking the way). One of them called me rude.

So I thought I would put up a picture of two rude and annoying people.

Posted by Cheyenne Palisades at 9:26 PM

Not exactly my best angle.. But def still hot! and could you post my name in the caption cause everyone lol KNOWS its me but I like my name in lights.. Btw.. when you bump into people cause you cant REZ then WALK... You ARE rude *GIGGLES* kkthnx! <3

Sorry, no, it wasn't you. I remember the names of both avatars. I wonder about the size of your ego since you assume it was you.