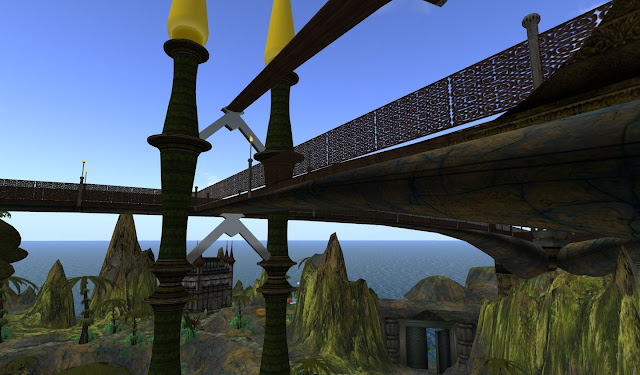 In many ways Svarga represented the best in Second Life. Creative, exciting, and eerily beautiful, it was a favored destination of thousands of people.

From its guided tour system to its self-contained ecology of growing plants, insects, and birds, from its soaring towers to its little store full of neat stuff, Svarga just rocked, and everyone knew it.

But now Laukosargas Svarog's Svarga seems to be no more-- or at least it's no longer possible to get there. It does still show on the map, and the image on the map shows its original layout, but teleports no longer work.

Svarog has made plans to leave Second Life, at least for a time and has been looking for someone to purchase Svarga, and, hopefully, to maintain it in its original state. In his New World Notes, Wagner James Au notes Flipper PA Peregrine has been spearheading a drive to amass enough land credits to pay the tier.
I've no idea what is happening. Hopefully the sim was purchased by someone who appreciates it and will maintain it. At worst, it's on its way to being shut down.

Hats off to Ms. Svarog for giving Second Life such a beautiful place for so very long!

Posted by Cheyenne Palisades at 10:18 AM

FlipperPA's thing made me wonder if it would be possible to merge the sim with the mainland somehow. Easier for people to donate tier to support it than cash. Of course as per usual I'm way too late with this idea.

It's such a shame, I basically started playing in SL because of Svarga and would love to save it but the restrictions and price that was put on the sim made it very difficult for me to justify.

Thank you for your comment, Elantius. Yes, it did seem the sim had far too high a price set on it.