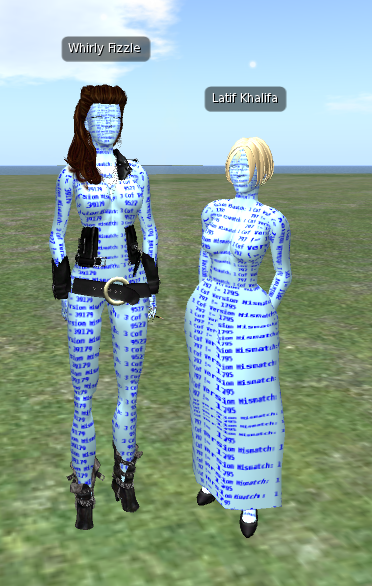 The Lindens are preparing a revision of their viewer and server software that will feature server side baking of avatars. The code will prevent what is known as bake-fail (you're in bake fail when you're a cloud or when you add or remove clothing and you or others don't see it.

So yay, avatar rendering will be much more reliable, but a big boo because (wait for it!) viewers using V.1 code will no longer be able to correctly render avatars. They'll look something like the photo above, which I caged-- err, borrowed-- from the Firestorm Viewer website.

And so, all those people who use viewers based on older code won't be able to correctly see avatars-- and that will be a deal breaker for thousands of Second Life residents. I mean, who wants to spend time in a world in which everyone looks like a frigging blueprint?

Implementing the new code will render V.2-based Firestorm unstable. Expect lots of crashes and other craziness when SSB is implemented.

The Firestorm viewer has an energetic and industrious team that is working hard to make the transition smoother-- but quite frankly they don't think they'll be ready when the hammer drops in three or four months.

God knows that the independent single coders who do all the work on their viewers will do. I expect a lot of viewers will just go away.

The Lindens, of course, have a considerable history of being late with rollouts, and revisiting their decisions-- so manbe SSB will be delayed, giving the Firestorm team more time to get ready. And hopefully the Lindens will decide to preserve the ability to render avatars the old way.

I've been forced to spend time in Firestorm so I can deal with direct delivery on the Second Life marketplace, so I won't be completely lost when SSB debuts. With the legacy skin, Firestorm looks and works a great deal like Phoenix-- but I hate the damn toasts. Hopefully they'll one day go away. Let us hope.

To learn more about server-side baking see the following sites.

Inara Pey: Avatar Baking "And the Clock Has Started"

Inara Pey: Firestorm: Where Next and Early Looks


Posted by Cheyenne Palisades at 7:07 PM