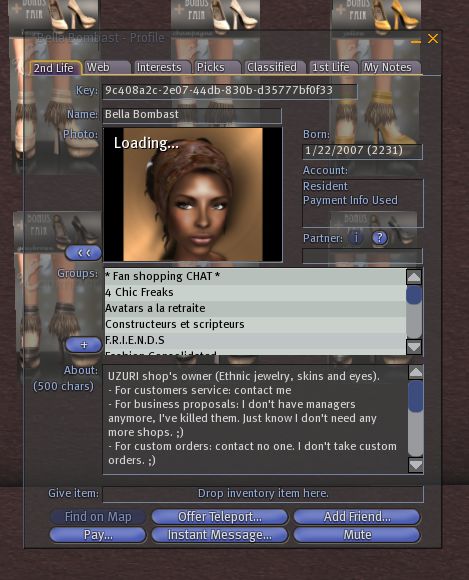 I like the jewelry at Uzuri in Second Life, and I absolutely love my Hanu dress, in brown, but I'll no longer be shopping there.

Why? Because of creator Bella Bombast's profile.

The sentence that lost me to Uzuri products is just below the text that shows in the About box. It reads:

MALL OWNERS & MAGAZINES: forget me!!! You all grow up on creators head. I don't need you.

Keeping one's products out of malls might make sense, but Second Life's fashion magazines have an avid readership of fashionistas who spend big money on couture. They promote designers, both by way of advertisements and by featuring a creator's work and the creator him- or herself-- and they don't ask the creator for money. It's a symbiotic, win-win relationship. It's just stupid to consider it parasitic.

Which is probably why the Uzuri store is no longer in world.

Karma can be a bitch.

Posted by Cheyenne Palisades at 11:47 AM