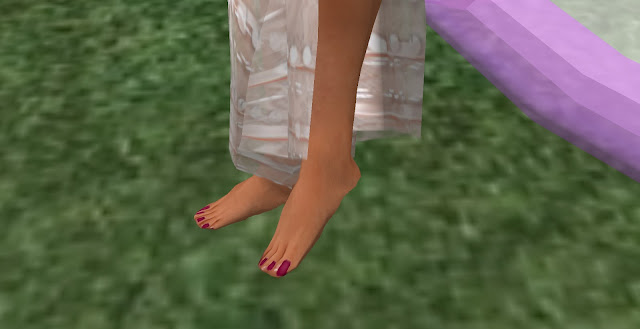 Those are my avatar feet, above. I know they don't look great, so I wear nail color to distract those like tinies and foot fetishists who might look at them.

Your lower appendages are much the same unless you have invested in a pair of mesh feet. And of course you have made that investment. You're vain, just like me. Admit it.

When Second Life was new, shoes were created by distorting feet into a rude approximation of heels-- like this: 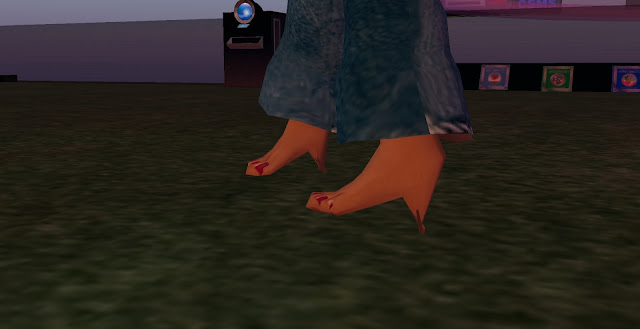 Believe it or not, in the early days, these were considered avatar shoes. The best you could do with them was to cover them with socks in a dark color-- but they will still look like Chinese foot torture.

One of my friends set out to be a prostitute with those misshapen avatar feet. "How's it workin' out for you?" I asked. "Not good," she said. I gave her a pair of prim shoes and she went on to make a fortune-- although I think it was her rude gestures rather than the shoes that made her popular.

So anyway, the ugliest shoes anywhere; that was our lot. But then Second Life entrepreneurs, always fast to sense a potential market like scripted penises and breedables, began to create shoes made from primitives. You know, like that cube you rez by mistake from time and time. There were, after all, no sculpted prims and mesh was only a gleam in IWISHTHERWASSOMETHINGBETTER Linden's eye.

Some prim shoes were beautiful, but unless they were without heels, they required that deforming foot form to be worn. This raised the top of the feet so they would be angled right for heels-- but that didn't quite work. Why? Because that ugly avatar foot stuck out all over the place, ruining everything. Like this-- 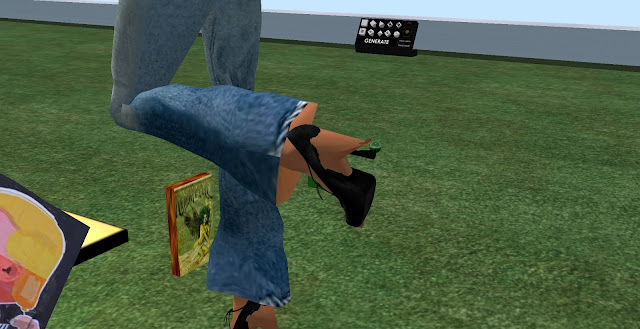 Those are my Maitreya ChiChi pumps, which were great for more than a decade and are now broken. Most of my old school shoes (and my collection would put that of Imelda Marcos to shame) are similarly affected, unwearable because of protruding avatar feet.

I was shocked when I discovered I had been walking around with screwed up feet. No one I knew well was online to freak out to, but there was an incoming IM from Annie Brightstar with a comment about my blog and she was nice enough to tell me what the problem was and give me a folder of alpha masks to try.

So here's the problem. Invisiprims are broken. The Lindens broke them. More specifically, Materials broke them. When Advanced Lighting is on, invisiprims no longer render properly.

Since shoes made from prims worked only because of a workaround-- invisiprims-- they are now all broken.

Invisiprims were small prims textured with one of two (apparently the same) textures that could be set only by scripts (as if the Lindens would have to kill you if you were to accidentally see the texture in its actual form). They were, as their name suggests, invisible, and they had a special attribute: they blocked any object which used total or partial alpha (invisibility). Since avatars have alpha, properly sized and positioned  and attached to a prim shoe's linkset, invisiprims effectively blocked misshapen avatar feet-- the very parts that protruded from the shoes. They made prim shoes work.

Here's me, standing beside a highlighted invisiprim, with Advanced Lighting turned on. 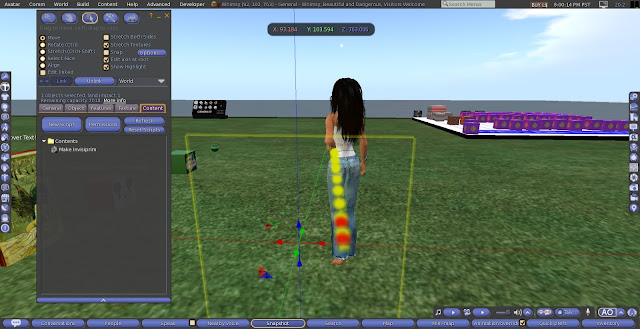 I'm visible, even though the lower half of my body is screened by the invisiprim.

Now look at this photo from the same angle with Advanced Lighting turned off. 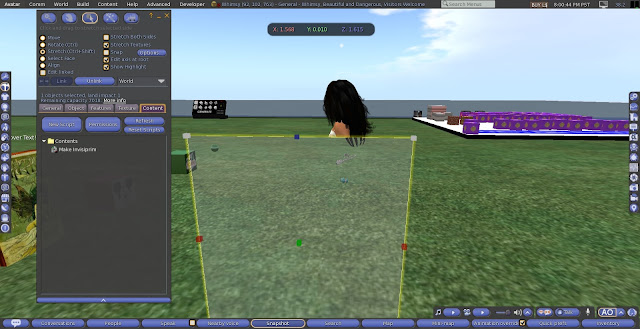 See what happened? My body isn't visible. If you look closely you can see my jewelry, but not my body. The parts of my hair with alpha are gone also.

This is bad news for shoes of the old school. The invisiprims no longer screen the parts of the foot that stick through the shoes. Hence my freakout.

Invisprims weren't perfect. When I would fly above water while wearing them, they would have a strange shimmering effect (because the water has an alpha component)-- but they worked wonderfully in most circumstances. It's such a shame they had to be broken, rendering millions of pairs of shoes unwearable.

There's a workaround, of course. There are always workarounds. Avatars can now wear alpha masks which can accurately render any area of the body invisible. Unfortunately, the ability to edit them in world seems to have gone away. Several years ago I could make an alpha and move a slider, progressively disappearing or revealing portions of my body until they were just right for my purpose. Now, apparently, alpha masks have to be made off world-- and to make matters worse, most shoemakers haven't gone to the trouble to make an alpha mask that would make their shoes wearable again. Instead, they have taken them off the market and conveniently ignored their customers, this even though one or two or maybe three masks would have worked across their entire inventory of shoes. Customers are left to their own ends; they can invest in a new shoe wardrobe or find or create an appropriate alpha mask. The latter choice, of course, requires skill with GIMP or PhotoShop.

I'm sure not all shoe makers have neglected their customers, but so far I've had no luck at places like Maitreya. I'm pretty pissed, I tell you, more at the shoemakers than at the Lindens.
Posted by Cheyenne Palisades at 12:20 AM

leave the dark ages of sl

These are the dark ages of Second Life. Content created out of world. Individuality of avatar sliders lost to conformity of Mesh Body 1 or Mesh Body 2. And where the FUCK are my feet?