The title says it all.
Posted by Cheyenne Palisades at 1:02 AM 0 comments

When Second Life Grinds to a Halt


I had a terrible time in world last week. Second Life, which runs admirably on my Sony VAIO laptop, was giving me problems. I was unable to build or use my camera. When I tried, nothing happened. The program just froze.

I soon realized the problem was with my mouse. I could cam with arrow buttons, but the moment I tried to use the mouse, the camera locked up. Damn cheap Logitch wireless sumbitch!

It wasn't the mouse, of course.

The problem turned out to be WordPad, a Windows utility for reading plain text and rich text files.

On my recently-deceased desktop Word was a beast. It took forever to load and it was always annoying me--- so I converted my dozen or so most-consulted files (passwords, calender, notes, address book) to RTF. On my laptop, however, Word ran just fine. It was WordPad that was the beast. Files were slooow to open and search took forever.

I often leave the files I consult frequently open, and it was when one or more text files were open that my camera locked up. WordPad was the culprit.

I'm going to reinstall  WordPad and see if that solves the problem; if not, I'll convert my RTF files back to Word format.

Anyway, problem solved. And I still suspect the Lindens were behind it all.
Posted by Cheyenne Palisades at 4:11 PM 0 comments

The Spy Business Isn't What it Used to Be


"I can't believe you've retired from your life as a spy," I said to Sweetie.

"Well, the spy business isn't what it used to be," she said. "I mean, I loved the Minox spy camera. It had class. Nowadays every idiot has a smartphone with a built-in 8 megapixel camera with high-definition video. It's just not the same."

"I see your point," I said, as I surreptitiously took her photo with my smartphone.

"And then there's the company," she said.

"Them too," she said. But I mean the players. In the old days I hung out with James Bond and Julia Child and George Smiley. I used to visit Alger Hiss in prison."

"But those are semi-fictional," I said.

"I mean Hiss and Child are real, but Bond and Smiley are fictional characters."

"Well, I used to hang out with them all," she said. "Especially Julia. Who do you think was the source of my interest in the pasty sciences?"

"Either Julia or Smiley," I said.

"Julia," she said, "although Smiley gave me the idea for throwing scones."

"Well, Hiss and Child are dead," I said. "Bond must be like eighty years old now, and Smiley's older than that."

"You know what I mean," she said. "And then there's MI-6. It just isn't what it used to be. Bond is retired, Moneypenny came out as lesbian, and that old guy who made the weapons now works at the Redstone Arsenal and has like a thousand patents."

"Sean Connery was the real Bond," I said.

Sweetie is a Roger Moore fan, but she didn't bite. "And who's at MI-6 now? A bunch of geeks at keyboards, reading everyone's e-mails and recording everyone's calls." She sighed. "The field operatives-- there are still a few-- have to check in hourly via IM and attend weekly webinars. It was time for me to leave the business."

"Maybe you could hook up with Wikileaks," I said brightly.

"Who do you think sent them all those documents?" she asked.

"I'm not sure," she said. "I'll do some experiments with icing string theory, certainly. I'll have to conduct them well away from the ground. We don't want any visitors dematerialized or covered with cream cheese."

"We wouldn't want that," I said, "although all those Brazilians who leave prims on our land could use a lesson. Maybe you could go undercover at Linden Lab."

"That's already been done," she said. "Hamlet Au. And look how that turned out."

"He's mostly not writing his own blog these days," I said. "Iris Ophelia is kicking ass over there."

"Mostly," Sweetie said, "I'm going to concentrate on being a muse."

"But you already are a muse," I said. "My muse. Please don't tell me you're going to muse others."

Posted by Cheyenne Palisades at 9:11 AM 0 comments

On the Tram at Nostos Deer 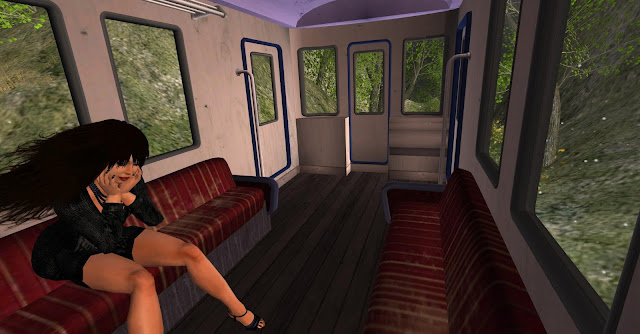 Posted by Cheyenne Palisades at 1:57 AM 1 comments

Out of the Spy Business Forever


"I like the word career," Sweetie said. "It's rather like careen. Careen is a word with class. You get to rush into unpredictable situations. You get to bounce off things."

I thought Sweetie would be morose after failing the FAA flight examiner's test, but clearly she wasn't.

"I just got word from my attorney. I won my lawsuit against Linden Lab."

"The lawsuit about the UUID?" I asked. Sweetie had sued the Lindens because her universally unique identifier was comprised of letters and numbers-- just like everyone else's. "How unique is that?" was her primary argument for financial compensation.

"The lawsuit about your avatar distorting when it goes above one million meters?" I asked.

"No, no," she said. "The lawsuit about my inventory disaster."

In October 2012 one of Sweetie's exploding lipsticks detonated in her Objects folder. Although she had buried it 69 layers deep in nested folders, they hadn't held and the damage had been extensive. She argued that if she had only been able to bury it 100 folders deep, they would have held.

"As I know from my experiments," she said, "nested folders begin to go wonky at level 20 and are completely out of control at level 70."

"My attorney convinced the jury I needed those 100 levels to contain those lipsticks," she said. "Seventy just wasn't enough. The folders have insufficient tensile strength."

"Who is your lawyer, anyway?" I asked.

"That's probably a good thing," I said. "What's the settlement?"

"My weekly stipend is doubled," she said, "and I get lifetime free membership in Second Life. "From now on I get $1000L a week for life."

Sweetie came to Second Life just before I did, when the weekly stipends was $500L. I just missed the deadline. My stipend is $400L. For years now stipend have been $300, but in our case age has privileges.

"We already have a sim," she said.

"Now I have financial independence," Sweetie said. "I'm out of the spy business forever."

Posted by Cheyenne Palisades at 2:58 AM 0 comments 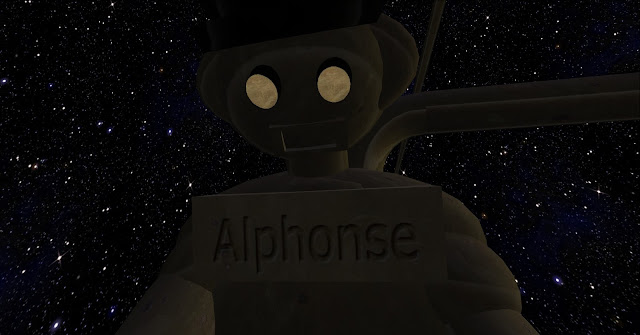 My name is Alphonse. I was a lowly maintenance robot in the bowels of the robot sanatorium until Cheyenne and Sweetie repurposed me. Now my life is far worse.

How is it worse? Have you ever been tethered to a brass pole? 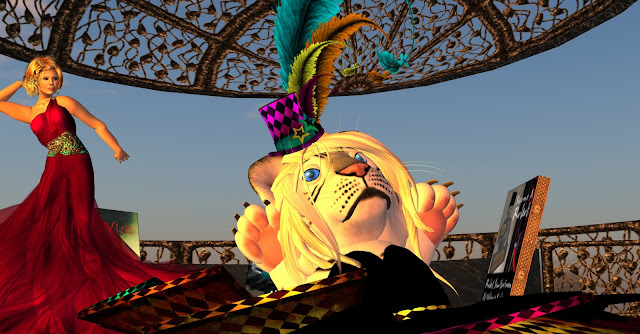 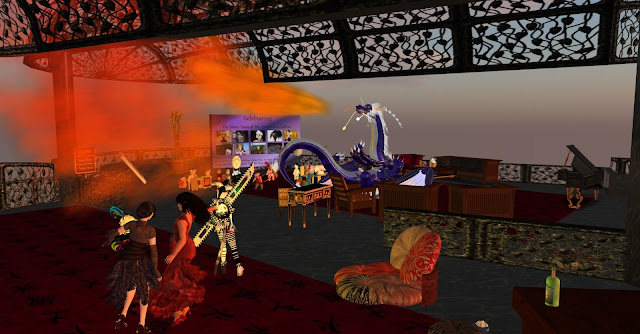 Sweetie's 7th Rez Day celebration was going without a hitch-- until the Linden Bear Collective showed up.

It had to do with my present to Sweetie, and I take full responsibility.

You see, when I jumped to Marianne McCann's history build to take the photos I forgot to get earlier, I noticed a region named SL10B Bear Island on the map. I jumped there and found a sim filled with Linden Bears-- perhaps 150 of them.

For those who might not know, every Linden has one or more bears named after him or her-- and so do the moles, those hard workers who create in-world content for the Linden builds (only theirs are moles). Some bears are made specially for specific in-world events. The bears are distributed at Linden-sponsored events, and most Lindens will send you one if you IM and ask.

Many Lindens are no longer in world, and so aren't around to give away their bears. Their bears, and bears from past events, are highly-sought-after and generally unavailable-- but here, at SL10B Bear Island, were many, many Linden bears, all free for the taking.

I spent an hour or so grabbing bears. Since about half were transferrable, I grabbed two each of them, one for myself, and one for Sweetie. Back on Whimsy I spent the better part of another hour packing bears into a gift box for Sweetie. At last night's celebration I gave her the box.

Sweetie was delighted. Here were bears to drop from great heights, shoot out of cannons, attempt to tweak. She rezzed a dozen or so in gleeful anticipation-- but the bears had a mind of their own.

Well, no, they didn't. What they had was me, using my Mystiool's mimic function to make it appear they were hatching some sort of plot over on their corner of the platform. 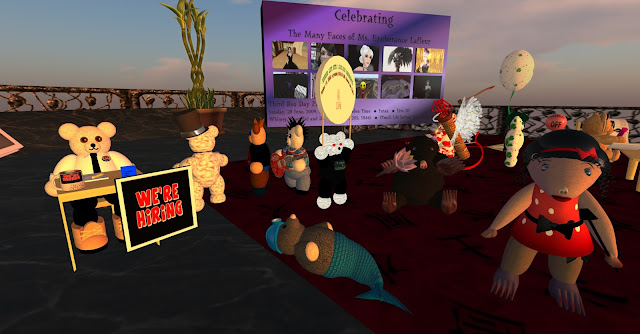 Linden Bears Collective: We want to dance, too!

Sweetie: They are a collective, not a hive mind, right?

Linden Bears Collective: Dance with us!

Fnordian: Yep. At least that's the buzz on the streets.

Sweetie: Maybe I have keep them all in seperate folders in my inventory.

Serenek: Heaven forbid they should fornicate and reproduce in your inventory, Sweetie.

Linden Bears Collective: We are only waiting for the great Torley to come and lead us.

Cheyenne Palisades: Sweetie's dead! I get her shoes!

Sweetie: Not my Grim Brothers heels!

Sweetie: I must revive...